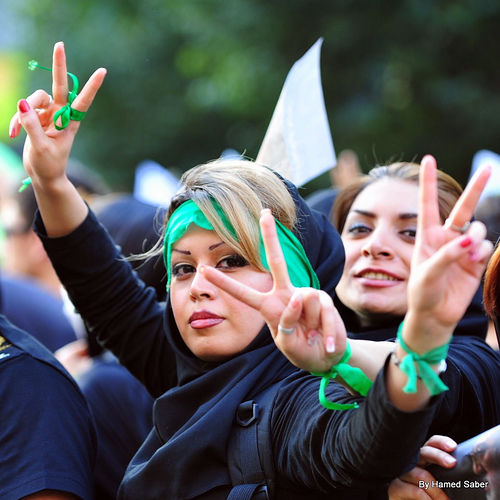 In Iran, it’s socially acceptable for women to pursue higher education and hold their own jobs – but expressing queer desire is not just taboo, it’s illegal.

While extramarital sex between a man and a woman is punishable by house arrest and stoning, women who engage in lesbian sex receive 100 lashes or the death penalty. Many homosexuals are counselled into sexual reassignment surgery because being transgender, unlike being a homosexual, isn’t against their interpretation of Shia Islam.

As a result, more and more Iranians live in exile in Turkey, Europe and North America. The Iranian lesbian community is growing quickly.

For example, the organization LesMigraS e.V. prints brochures and leaflets about homosexuality in Farsi, in order to educate not just open-minding and educated Iranians in exile, but also their more conservative families. This information is available online to Iranians who can bypass censorship.

Gorups such as LesMigraS e.V., while changing the minds of Iranians, also hope to draw attention to their cause internationally. They have been working tirelessly since the 1980s to do so.

Queer Iranian artists are also using their work as activism.

The Iranian pop musician Googoosh made headlines in 2014 with the song Behesht (Paradise). This song tells of a young woman who receives a marriage proposal.

Many members of the LGBT community in Iran wrote to tell us that the release of the video led to some positive changes in their lives. I realized what kind of power art gives you.”

Despite the vitriolic criticism he received, Akhavan insists that he will not back down from this cause. “We have to show that we are on the side of the people in the LGBT community and accept them as part of our society just like anyone else.”

Learn more at Qantara, and check out the Iranian lesbian film Imagine Me and You.