How Do I Mingle At A Lesbian Bar? 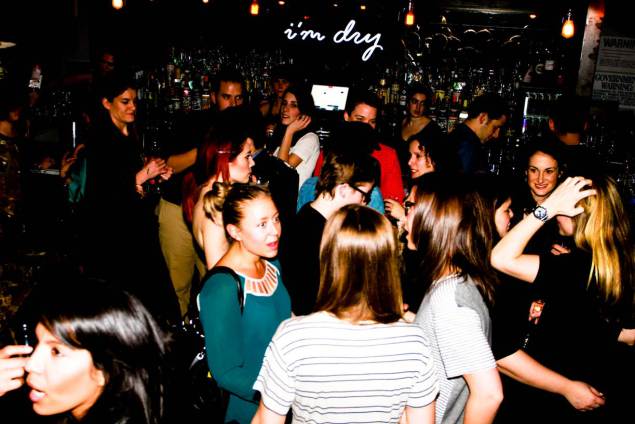 Q: How Do I Mingle At A Lesbian Bar?

I’ve been out for 2 years now and I thought I was fine with waiting until I moved to a bigger city to actually start dating or hooking up with someone. Apparently not it seems.

This spring I’ll be visiting a couple of friends who live in a very gay-friendly city and I figured I could check out a few gay bars/clubs while I’m there.

The problem is I have no idea what I would do there. Do lesbians even do hook-ups? And how would I make my intentions clear? What do you wear? Are there any codes?

My friends have told me I should be fine there because of my accent (since I’m not a native English-speaker) but I doubt that’s gonna help as much as they might think.

I haven’t dated since I was 14 and all the people I know are straight so I’m pretty much clueless.

Lesbian bars and clubs are great for meeting people, but in my experience they’re a better venue for making friends than for finding a girlfriend. Your experience may vary, but most gay bars cater more towards gay men (at least, all the ones I’ve ever been to have – and I’ve been to probably a dozen different clubs). That’s not to say you can’t meet a girl there, especially if you only intend to hook up.

Personally, I wouldn’t try it, though. There are easier ways to meet someone, that don’t involve alcohol and barely being able to hear each other – this is the age of technology, after all, and there are dating apps for those looking to get married as well as those looking for a one-night-stand. Yes, even for lesbians! The best part about this is you don’t even have to wait for Spring – you can start right now. If you drive, you can do some short travelling to get to a girl that piques your interest. But even if you don’t (I don’t) you can always find a girl willing to travel to you. Don’t underestimate the power of love – sometimes, long distance relationships can be the best!

Some lesbians definitely do hookups. Not all, of course, and there’s no way to tell just by looking at them. This is another reason dating apps are great – you can usually see, before you even begin talking to someone, what their intentions are. Most sites that are actually meant for dating will let you choose what you’re looking for from a list.

The easiest way to make your intentions clear is to just come straight out and say it. It seems over-simplified, but it’s the truth. I am a strong advocate for open, honest communication. If you’re looking for sex – say so! It’s not fair to lead someone on, and it’s no fun being led on, so by having that conversation as soon as you decide you’re interested in the person, you can save yourself (and the other person) from a world of hurt.

As far as what you wear: Some people will tell you to “dress in order to attract the girl you want to date”. My mom told me this one time when I went to a gay bar with her. (She’s not gay, but she’s always been pretty supportive… And, well, I had recently dumped a girlfriend she hated, so there’s that, too.) Now, ordinarily, I think my mom’s advice is pretty spot-on, but in this particular case, do not do that. You should dress a way that makes you comfortable. This doesn’t necessarily mean sweat pants and a tank top, but you shouldn’t go against your usual style. If you do end up finding a relationship based off of how you dress, do you want your “second date” to involve explaining why you were dressed so differently the day you met – or be uncomfortable all over again? I wouldn’t.

There aren’t really any “codes”, except to be honest, and don’t be a creep. This seems pretty simple, but what I mean here is if a girl tells you she’s not interested, she’s not interested. She’s most likely not playing hard to get. Thank her for her time, and move on – you can’t really help who you’re attracted to, and if you push the issue she’s probably going to be even more turned off.

Honesty is also pretty important, and a lot of people take that for granted. We like to create this idea of who we are, even if it’s total b.s., and that’s really not fair to the other person (or ourselves). Be yourself, and be the best “you” that you can be. Don’t try to be anyone you’re not, and don’t pretend you’re rich if you really have $3. (Although I totally support the idea of pretending to be poor if you’re actually rich – it helps keep away the people who would only be interested in you for your money… But I digress.)

I think you’re right about the accent, though. I don’t think it’s necessarily going to help, but it probably won’t hurt, either. There are a lot of girls who just swoon at the sound of an accent – sometimes it doesn’t even matter what accent. There’s something about someone who talks different that is exotic. But I don’t know of anyone who dislikes anyone because of their accent. Either it’s a turn-on, or it’s not even a consideration.

Specifically in regards to “mingling”, the best way to approach a girl is to actually approach her. Walk up, introduce yourself, offer to buy her a drink if you want – just don’t get her wasted if you have hopes of hooking up, because that’s pretty much not a good thing. Keep it classy, and have fun.

Just be you, and be confident with yourself. Don’t worry about hooking up your first time out. Just focus on having a good time, and if it’s meant to be, it’ll happen. If it doesn’t happen, set up an online dating profile – but don’t let it be the only thing you do. Love finds us exactly when it’s meant to.

PrevPreviousHow Do Clarify My Sexuality?
Next5 Reasons Staying Single Feels So RightNext