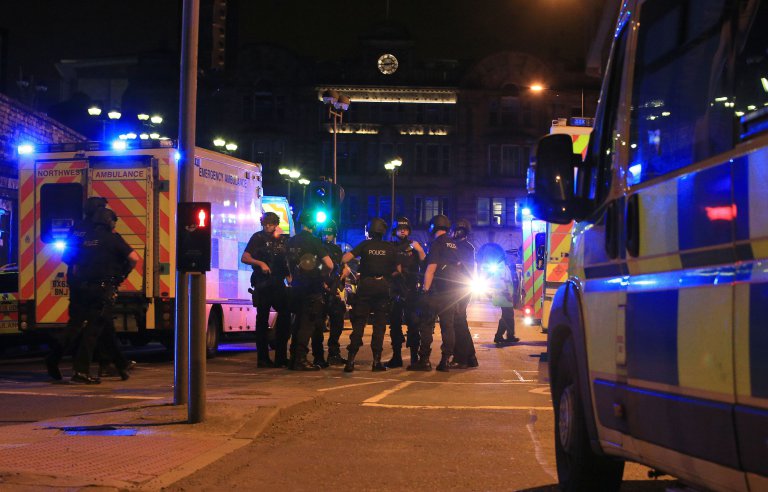 Twenty-two people are confirmed to have died in an explosion at the Manchester Arena last night. Dozens more people – 59 at last count – were injured by the blast.

The horrific attack took place at the end of Ariana Grande’s show, where the singer has been performing on the European leg of her Dangerous Woman Tour.

The bomb was detonated in the minutes after the singer walked off stage.

The blast happened in or around the foyer area, and there was mass panic as people left the venue.

Frantic parents were appealing overnight for information on their children who were in attendance.

Many unaccompanied minors had gone to see their pop idol.

Those in attendance at the concert were evacuated from the arena and train stations nearby had been brought to a standstill.

In a statement in Downing Street, British Prime Minister Theresa May said it was “now beyond doubt that the people of Manchester and of this country have fallen victim to a callous terrorist attack” that targeted “defenceless young people”.

She said the security services believe they know the attacker’s identity but are not yet able to confirm it.

The Labour leader, Jeremy Corbyn, the Lib Dems’ Tim Farron and Nicola Sturgeon, the Scotland first minister, have been among political leaders voicing their sympathies and concern.

I am horrified by the horrendous events in Manchester. My thoughts are with families and friends of those who have died and been injured. pic.twitter.com/QoCXH8qPYW

A “broken” Ariana Grande tweeted after the explosion that she was “so so sorry” and through the night other figures from entertainment to global politics have sent out words of condolence to those affected.

As many as 21,000 were at the sold-out concert for Grande – with many fans being young children and teenagers.

Tonight, our hearts are broken. Words cannot express our sorrow for the victims and families harmed in this senseless attack.

We mourn the lives of children and loved ones taken by this cowardly act. We are thankful for the selfless service tonight of Manchester’s first responders who rushed towards danger to help save lives. We ask all of you to hold the victims, their families, and all those affected in your hearts and prayers.”

In Manchester itself there has been a big community response via social media, with concertgoers offered rides home and beds for the night.

The hashtags #MissingInManchester and #Manchestermissing are now being used to track down some of the dozens of loved ones still missing.

Relatives are using social media to hunt for loved ones, and Manchester police have also set up an emergency number (0800 096 0095) for those who are concerned about missing friends and family.

More than 240 calls were made to the emergency services, with responders including 60 ambulances flooding the area.

Victims of the explosion are currently being treated at eight hospitals across the city of Manchester.

More than 400 police officers were deployed as part of the operation, with a visible presence remaining on the streets of Manchester this morning.

Greater Manchester Police Chief Constable Ian Hopkins confirmed they are treating the blast as a ‘terrorist incident until we have further information’.

If confirmed as terrorism it would be the worst attack in the UK since 56 people were killed in the 7/7 London bombings in 2005.

A large cordon remains in place around the arena and nearby Manchester Victoria Station, which was evacuated during the incident and remains closed, while forensic investigators gather evidence.

Police have appealed for concert-goers and witnesses to provide police with footage from the scene if they believe it can assist the probe.