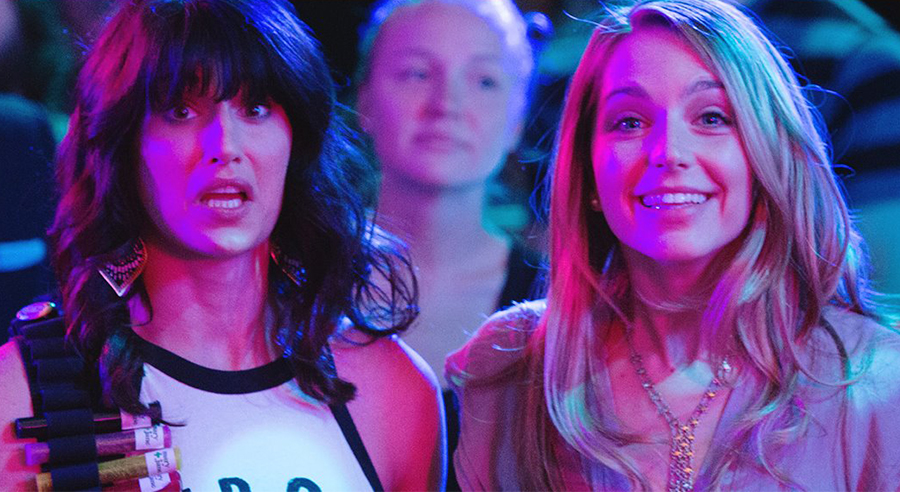 MTV aired their new show, Mary + Jane on the 5th September and already the LGBTQ community is asking if this will be the new ‘faking it’ replacement. Mary + Jane is about two friends that set up a marijuana delivery service company in Los Angeles. Jordan (Scout Durwood) and Paige (Jessica Rothe) are determined to be the best in the business and both like to sample their wares as well.

Jordan’s character is sexually fluid and Paige isn’t 100% hetro either so there is a lot of scope for the characters to have some fun. Paige enjoys some marijuana induced fantasies about involving some famous women and Jordon’s love life is far from simple.

I think what’s exciting to see is queer as usual, as opposed to gay and that’s what the show’s about,” Scout said. “So I’m excited the show is about queer as usual. … I think Jordan doesn’t ever define it; she never labels it. So my fingers are crossed, double-crossed, triple crossed that we get some more gender fluidity and gender bending in it.”

Because of the good friendship between the characters and the fact they are both open to experimentation fans are already asking if there is likely to be something romantic between the two of them, as there was in ‘Faking It.’ And most audiences always like it when the BFF get together if there is a chemistry there.

Faking It was really good at having those moments. We have those moments, but they’re a little more light-hearted. They’re less sincere. Because everybody’s gay. I think guys have this kind of bromance genre now, and that’s fine, now it’s becoming a thing, and it’s great. I think we’re kind of like the femme bromance. So even though it’s not sexual, it’s everything but. Like it’s emotional.”

In episode 2 Paige gets a little queer and as we see the depth of their friendship it could be possible that Paige and Jordan go there. When asked about this Scout replied:

We’re definitely not saying no”

Paige seems a lot straighter than Jordan and Jessica explains that she is not as straight as she seems and will discover a lot about herself over the season. Jessica continued with:

It’s also good to see a female focused show where the protagonists play characters that are normally reserved for men. There aren’t many strong female characters on TV where they are a little more off the cuff. Scout said:

It’s so smart. Even with police officers—women in positions of power are statistically less corrupt than men. … Hating on weed right now feels so fuddy-duddy. Honestly, what we’re doing is mostly legal.”

Whether these characters get together or not remains to be seen but the show has a lot going for it and it will be a lot of fun following their antics as the season develops.