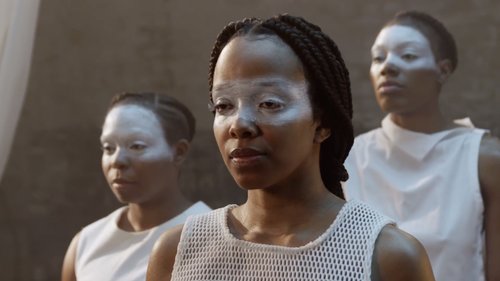 Michelada is a bold new music video that pulls gender apart and then smashes it back together in the most miraculous way possible.

The video comes from the Chicago alt-hip-hop duo Bonelang’s debut album, Venn Diagram. It stars genderqueer artist DW McCraven, who dances in three forms: as a “female” self in a black dress, spinning seductively; as a “male” self in baggy clothing who stomps through the space; and as a “nonbinary” self that seems closer to DW’s true presentation, who runs through a field, looking for truth.

The video is so intricate that you have to watch it several times in order to catch the nuances, like the splash of feminine light on DW’s face when dancing as a “woman,” or the tortured shadows that cross DW’s face like a second beard when looking upward as a “man.”

DW dances in a literal Venn diagram: a 25-foot art piece made of soil, sand, stone, sunflowers, cacti, and a skull. This not only symbolizes the overlapping nature of gender, but also “decodes the illusion of safe space for a queer person of color in America,” the video’s director, Samy Language, tells NPR.

The video is much more than a music video. It’s a short film. It’s a queer experience. The viewer is pulled forward into DW’s body as that body shifts and changes, as the body remains in control yet surrenders itself.

It is also an interesting exercise in desire; you may find yourself sexually attracted to one “form,” yet repulsed or confused by others, even though the body itself never changes.

The video took two years to make. Language says, “‘Michelada’ stems from the many masks of DW McCraven that were created as coping mechanisms to navigate the many identities and/or realities that the world imposes upon them.”

Watch the video for yourself, and get Bonelang’s album.