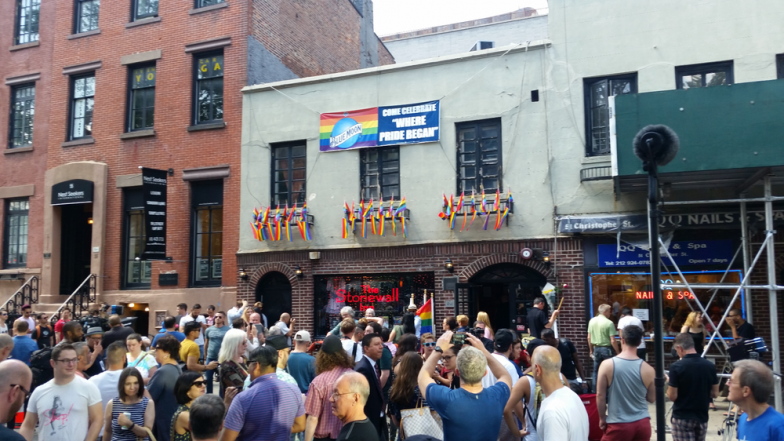 In 1969, The Stonewall Inn in New York City was the site of the revolutionary riots that helped to birth the modern LGBTQ rights movement that we know today.

As police raided the popular LGBTQ establishment, many of The Stonewall Inn’s patrons took a stand against the police’s policing of their identities as well as against the Mafia, who, at the time, owned the bar.

Following the initial clashes between protesters, patrons and LGBTQ bystanders and the three ensuing days of riots, many LGBTQ rights organisations were formed as people looked to take serious action against a society that had, for the longest time, oppressed them.

1970 saw the first gay pride parades take place and from here on, huge leaps and bounds have been made in terms of support for sexuality and gender identity.

The Stonewall Inn is already a registered landmark but two lawmakers, Senator Kirsten Gillibrand and Representative Jerrold Nadle, want to cement its place in history even further.

Recently speaking to government officials and activists at a gathering in front of The Stonewall Inn, Nadle told attendees that “we must have federal recognition of the LGBT movement’s history and origins and ensure that this piece of LGBT history is preserved for future generations” and that “without presidential action the park proposal would face “a long and uncertain road, as so many things are in Congress today.”

Plus, President Obama has previously name-checked The Stonewall Inn, acknowledging its importance alongside Selma and Seneca. Nadle hopes that “[Obama will] be here to inaugurate it”.

This national park campaign comes as Stonewall, the Roland Emmerich film about the riots, receives heavy criticism for failing to acknowledge the trans women of colour and black lesbians who played a huge part in the riots, instead making the protagonist of the film a fictional white, gay man.

Although the film may not be accurate, hopefully the national park push will lead many people to learn more about the historical site and the events that (really) took place there.