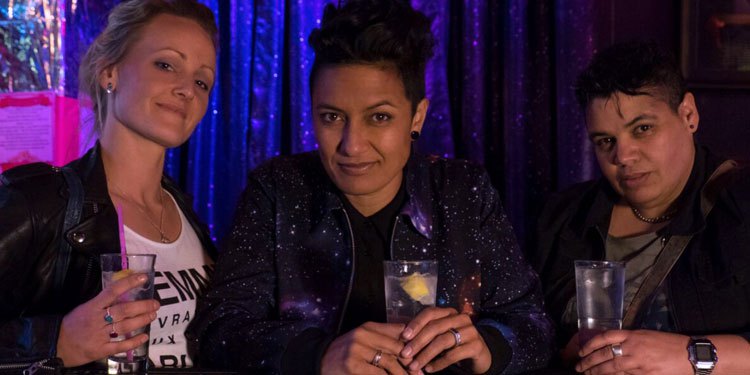 From the gentrified streets of London to the elevators of Italy and from the movie sets of Brazil to the many apartments/houses/basketball courts/pubs/clubs/just about every other building of the United States, this year web, web series about women who love women (WLW) have taken us all over the globe.

But one place that has yet to to show off its (fictional) queer female scene is New Zealand. Until now, that is, as the Oceanic country has gotten its very first lesbian web series in Pot Luck.

Pot Luck, says its creators, “serves up contemporary lesbian life in three great flavours”. Set in Wellington, the capital city of New Zealand, the series is all about three women: Mel (Nikki Si’ulepa), who is about as charming as they get, Debs (Anji Kreft), a shy butch, and Mel’s ex-girlfriend Beth (Tess Jamieson-Karaha).

The show gets its name from the ‘potluck’ dinners (a meal where each guest contributes a dish) that the three women have every week.

But, instead of just laughing, drinking and sharing some really good food (which sounds like a good time to me), they decide to turn the weekly meeting into a search for love and the “fun, sexy, and occasionally ridiculous” show follows them on this journey and as they ‘negotiate’ family life and friendship too.

Written and directed by NZ Film School and Whitirea’s Creative Writing Programme graduate Ness Simons, Pot Luck was actually inspired by Simons’ own pot luck dinners and speaking to Big Gay Picture Show she says that “there’s so much scope for story when you bring a group of women together, so it seemed like a good idea to build a series around friendship and food and the different dynamics around the table”.

Everyone can certainly agree with that and we all want more shows about more groups of women but while the first episode of Pot Luck is available now and was funded by the Emerging Artists Trust, it does need a bit of help to finish the first season.

Pot Luck is currently on the crowdfunding site Boosted where it’s seeking $22,500 to complete the remaining five episodes of the season; at the time of writing Pot Luck needs just over $4,000 to hit that goal, with 60 hours left on the clock so chip in if you want to see more of the show in future.