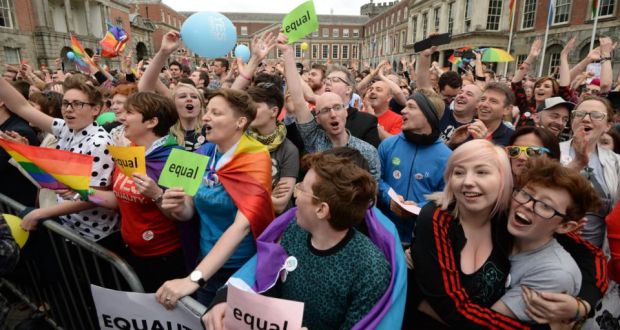 We are only a couple of months away from same-sex weddings in Ireland, after the Republic of Ireland’s Justice Minister Frances Fitzgerald brought forward a Marriage Bill, following the country overwhelmingly voted in favour of equality in a public referendum on same-sex marriage.

However, the same cannot be said for Northern Ireland, where marriage equality continues to be blocked.

The Democratic Unionist Party has vetoed equality bills in the Stormont assembly four times, using powers granted by the country’s peace agreement to file a ‘petition of concern’ on the issue.

Amnesty International has now stepped, and spoken out against the country’s continuing ban on same-sex marriage.

The move by the Irish government is a welcome step towards equality for same-sex couples in the Republic of Ireland.

However, it also underlines the extent to which Belfast has been left behind by London, Dublin, Edinburgh and Cardiff when it comes to equality for gay people.

Soon Northern Ireland will be the only part of the UK or Ireland where the government bans same-sex couples from getting married and refuses to recognise same-sex marriages conducted elsewhere on these islands.

Most people in Northern Ireland want to live in a country where unequal laws are consigned to the history books. If Northern Ireland’s politicians continue to fail on equal rights to civil marriage, then it will be left to the Courts.”

In a bid to break the deadlock on the issue, the UK Labour Party recently called for Northern Ireland to follow in the footsteps of the Republic of Ireland, by holding a binding public referendum on the issue.

A number of leading LGBT groups in Northern Ireland have rejected Labour’s calls for a referendum on same-sex marriage.

In a joint statement, a number of LGBT organisations – The Rainbow Project, HereNI, Cara-Friend, SAIL and Gender Jam NI – said that the idea of putting equality to a public vote was fundamentally wrong, and that their resources are better spent helping LGBT people than running an election campaign.

While the Republic of Ireland needed to make constitutional changes to permit same-sex marriage, requiring a referendum, the groups say equality can be passed in Northern Ireland through normal legislation – as was the case in England, Wales and Scotland.

We greatly appreciate the time taken by the Shadow Secretary of State to meet with our sector.

We welcome any and all opportunities to speak with political leaders about the state of LGB&T equality in Northern Ireland and Ivan was very willing to listen to our objectives and concerns not only on marriage equality but on wider issues of homophobia, transphobia, health care provision and education. We hope to continue these engagements with Ivan and his party colleagues.

However, we fundamentally disagree with Labour’s suggestion that the on-going and unlawful denial of the right to marry for LGB&T people in Northern Ireland should or could be resolved by a public referendum.

Of course we were delighted to see the ‘yes’ victory in the Republic of Ireland and many of us were deeply involved with that campaign but it would be inappropriate to suggest that the referendum campaign could be replicated in the North.

We believe that the current patchwork of marriage laws across the UK is wrong and that it went wrong in Westminster.

Not only did the Marriage (Same-Sex Couples) Act create the untenable situation where some marriages are only recognised in some regions of the UK but it placed unacceptable burdens on trans individuals to seek the permission of their spouse in order to access legal recognition of their gender.

We believe that, were a referendum to be called, equality would win – but it is wholly unacceptable to expect the LGB&T community in Northern Ireland, in the face of the most organised opposing forces in the UK, to secure a win in a referendum which would not be proposed in any other region of the UK.”