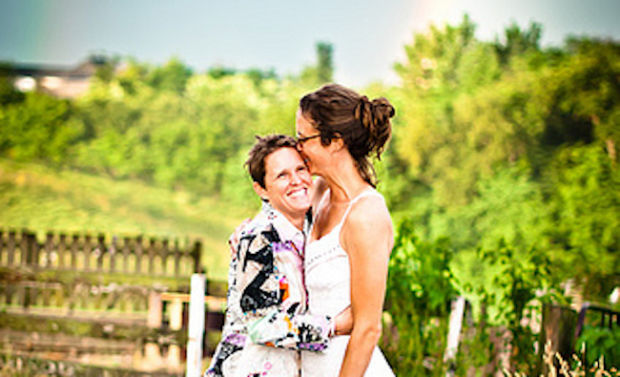 Well, I really have heard it all now. According to members of the tinfoil hat brigade, Lesbians who attended the 15th annual LGBT Rural Summit in Iowa earlier this month were being taught how to get subsidies for their cows and chickens by becoming farmers.

The Washington Free Beacon, a right wing publication, published an article written by Elizabeth Harrington regarding the summit and she stated:

The all-day summit will teach lesbian and transgender hillbillies how to get subsidies from the government like rural housing loans and ‘community facility grants.’”

It’s time for us all to fess up now and admit that yes, becoming farmers, and turning all lesbians into farmers, has been our lifelong ambition ever since we came out. And the fact Obama is sending the hillbillies amongst us to encourage other lesbians to start herding goats is quite simply an added bonus for us all.

This bizarre conspiracy theory was started by one of the more prominent members from the tinfoil hat brigade, right wing conservative radio host,  Rush Limbaugh. A week after the Iowa summit was held Limbaugh delivered a rant to his listeners regarding this oh so sinister lesbian plot. He said:

What they’re trying to do is convince lesbians to become farmers. So here comes the Obama Regime with a bunch of federal money and they’re waving it around, and all you gotta do to get it is be a lesbian and want to be a farmer and they’ll set you up. I’m like you; I never before in my life knew that lesbians wanted to be farmers.”

Really Limbaugh? How could you not have known? Us lez’s and trans wannabe farmers have been in cahoots with Obama planning this for years. You must try to keep up with what’s really going on a bit more. Keeping up with the times is another thing Limbaugh seems to have an issue with as he went on to say:

I never knew that lesbians wanted to get behind the horse and the plow and start burrowing. I never knew it. But apparently enough money [made] it happen, and the objective here is to attack rural states.”

Get behind a horse and plough? 100 years ago perhaps. I think he’s been watching too many re-runs of ‘Little House on The Prairie.’ These days’ queers prefer to get behind a tractor Rush, just so you don’t think we also work our farms, or intend to work our future subsidised farm,  the same way John Boy used to.  We may be lesbian hillbillies but we like to make use of modern day equipment.

So there you have it girls. We’ve been rumbled. Best we give up our milking and chicken feeding activities and plans and think of another way we can take over rural America.