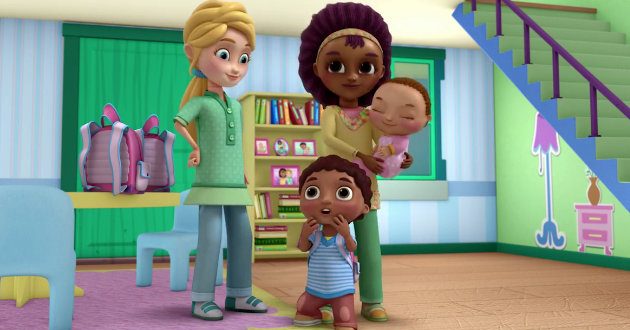 In a first for a Disney Junior show, the most recent episode of the cartoon series featured same-sex parents.

In the episode, the family lives through a scary earthquake and learns the importance of having a safety plan in case of emergencies. But it’s the series’ decision to feature a same-sex couple — voiced by actors Portia de Rossi and Wanda Sykes, who are both lesbians — that’s actually groundbreaking.

Sykes explained in a video by GLAAD about her involvement.

The diversity of the show and having an African-American little girl be the star of the show — and also being a doctor — it sends a great message.”

I am a fan of Doc McStuffins. My kids, they watch the show. With this episode, they see a family that looks like our family.”

The sexuality of the two moms was not a key focus of the show, but the LGBT diversity did not go un-noticed.

One Million Moms – who despite their name have just 3,722 mostly-male Twitter followers – claimed the show was corrupting children and enticing them into a homosexual lifestyle.

Controversial topics and lifestyle choices should be left up to the parents to discuss and Disney Junior should not introduce this to young children.

Just because an issue may be legal or because some are choosing a lifestyle doesn’t make it morally correct. Disney should stick to entertaining and providing family-friendly programming instead of pushing an agenda.”

In a pre-written letter One Million Moms encouraged supporters to threaten Disney with a boycott for at least the third time this year, after taking exception to other instances of LGBT inclusion.

I always envision Doc McStuffins as a show about what it means to accept everyone as part of our communities.

As part of a two-mom family, I’m proud to have an episode that reflects my son’s world, and shows everyone that love is love in McStuffinsville.”

Children like mine deserve the chance to see their families reflected on TV, and this episode does just that in a beautiful and positive way.

Shows like this reflect our real world, and today that includes the many children being raised by gay and lesbian parents who are all going to celebrate this story.”