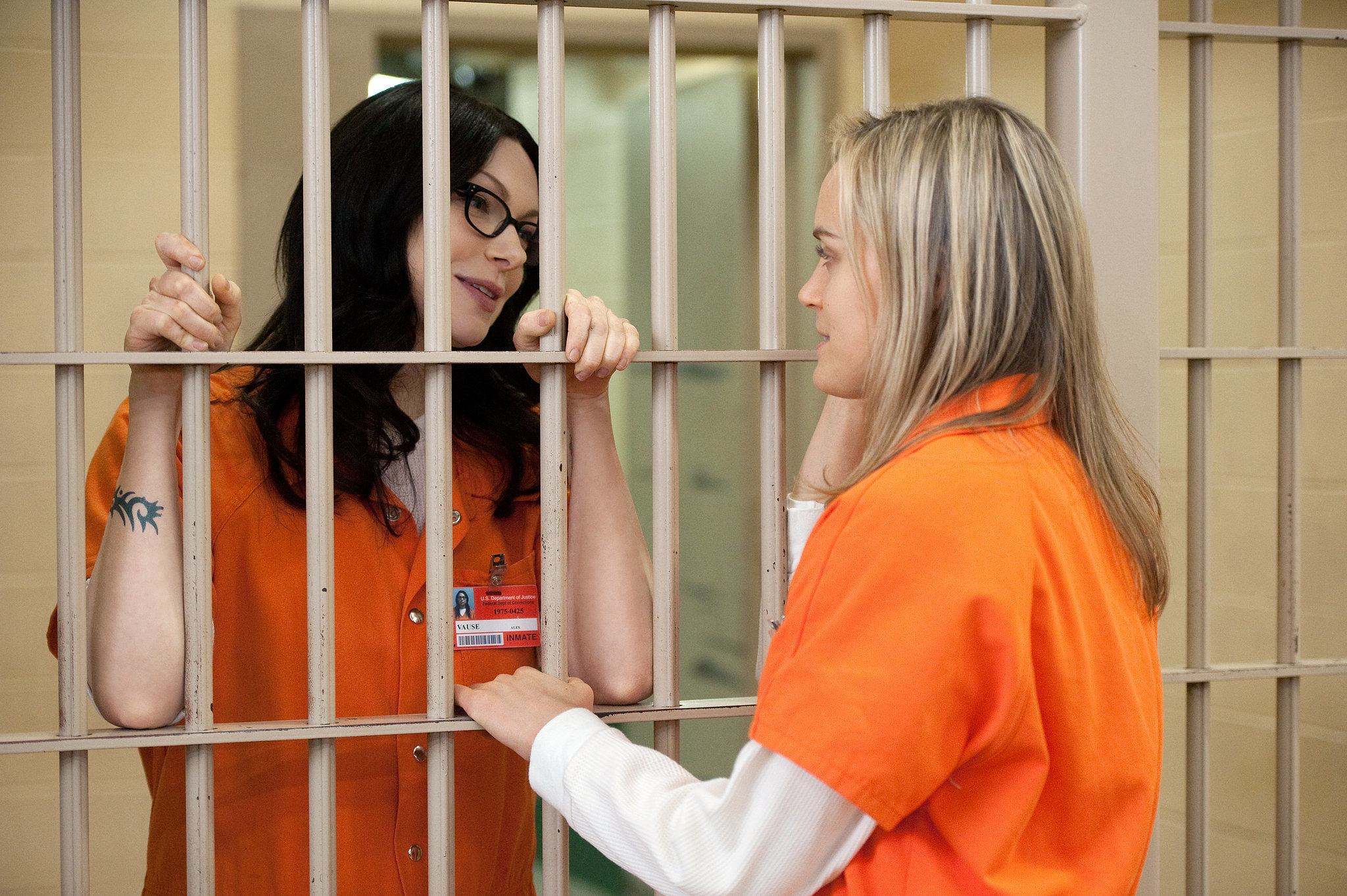 We’re less than three months away from the third season of Orange Is the New Black, and while the show’s creators are keep tight lipped on exactly what’s in store for the ladies of Litchfield this year, we can think of a few things that we’d like to see.

Why haven’t we gotten Big Boo’s (Lea DeLaria) backstory yet? DeLaria has said she already knows what Boo’s origin story is (in fact, she was given her character’s backstory as soon as she signed on for the role), so why are the fans still being kept in the dark?

We could also stand to see a little more from characters like Flaca (Marisol Gonzales) and Maritza (Diane Guerrero). Their friendly kiss last year was one of the sweetest scenes of the season, yet we barely know them. Can we get a little more information beyond the fact that Flaca loves The Smiths and Maritza has a kid?

We were disappointed to see Alex on the sidelines in most of season 2, and there was absolutely no opportunity for Alex and Piper to hook-up, so here’s looking at you, season 3 – especially now Alex is back in prison.

Last season, we did see plenty of flashbacks  though, and was luck to a scene where Alex went down on Piper, then just as Piper is about to “take the plunge,” Alex’s crazy semi-girlfriend storms in and starts beating Piper up. Not our ideal end to this scene, so this season OINTB owes us big.

Also with the introduction of Ruby Rose’s new character Stella now in the mix – sparks should fly.

End the Vee vs Red storyline

The conflict between Vee (Lorraine Toussaint) and Red (Kate Mulgrew) clogged up Season 2 like a deadweight.

However, now that Vee out of the picture, the can move on nicely. While Vee’s death will surely have huge effects on Taystee (Danielle Brooks) and Crazy Eyes (Uzo Aduba), we hope their mourning is quick so we finally can drop her character for good.

It’s never a good sign when a show’s entire sophomore season revolves around a new character who wasn’t even referenced in the first, so we’d like to see the focus return to some of our old favorites.

In Season 1, Red butted heads with Pornstache over her smuggling, tortured Piper (Taylor Schilling), hunted the Chicken and lost all her allies. In Season 2, she became Piper’s roommate, joined the Golden Girls, began smuggling again, was lied to about her family business, and had a seemingly never-ending feud with Vee.

That is a lot for one character on this show – especially when there are so many inmates who barely get any screen time. Here’s hoping Red takes a backseat this season, because as much as we love Kate Mulgrew, it’s time to give the other girls a shot.

Sophia (Laverne Cox) was one of OITNB’s original breakout characters, and yet she was almost entirely absent throughout Season 2. Season 1’s “Lesbian Request Denied” proved that Cox can handle drama as well as comedy, so let her show off her skills! Let’s check back in with Sophia’s family, especially her son Michael, but also see her get more involved in the current-day plots.

Sophia has mentioned a rivalry with Danita, the other Litchfield hairdresser – so show us more.

In season two we got to see Poussey (Samira Wiley) and her German Girlfriend flashback. It was the scene that gave us a real personal (in several ways) look into Poussey’s life that we hadn’t had before. We saw a tender, loving, expressive side of this passionate character in an entirely new light, framed by a surprisingly honest sex scene that really crushed our souls when we remembered this show isn’t exactly about characters whose lives turned out splendidly. We’ve loved getting to know Poussey, and in next season we demand to see more, especially after the beating she took last season.

Enough with the Daya (Dascha Polanco) pregnancy storyline. Two seasons in, and no baby – this has to be the longest human gestational period ever. Here’s hoping Season 3 covers several months rather than a couple of weeks, and Bennett (Matt McGorry) and Daya finally get to see their baby.

And while we’re at it, the truth also needs to come out about the baby’s real parentage. Though we bet the appearance of Pornstache’s mother (Mary Steenburgen) might help speed that along.