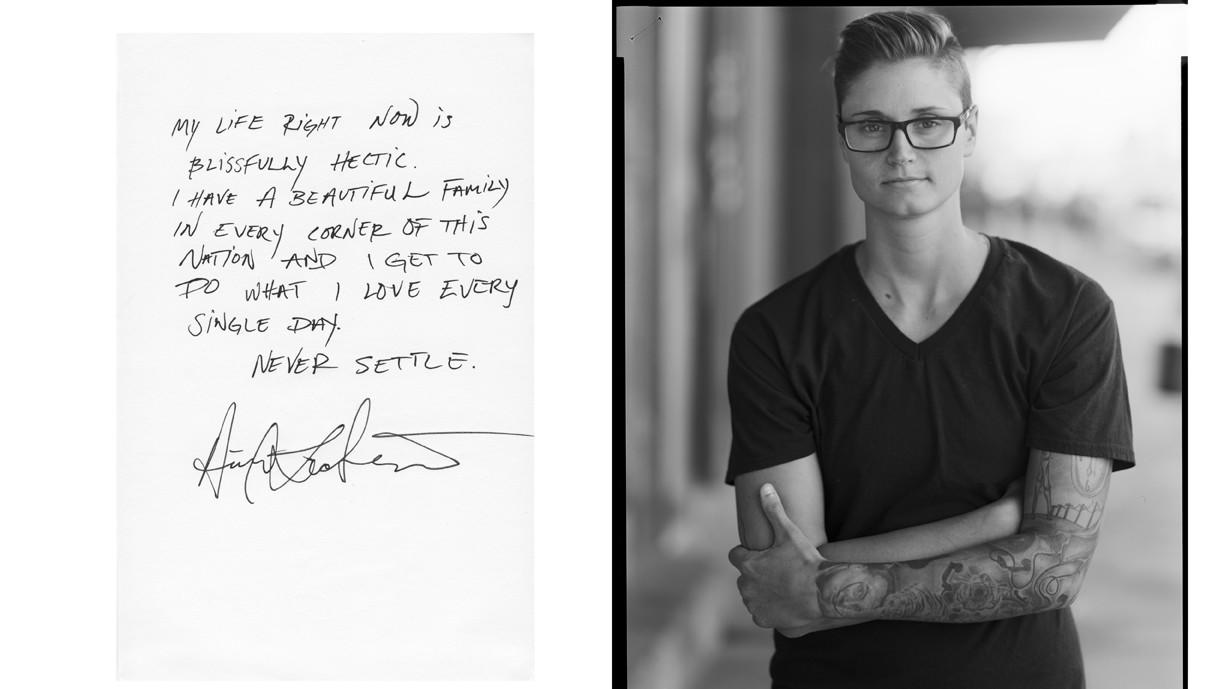 Robert Kalman would often stop people on the streets of New York and ask if he could take their portrait. One day he asked a tattooed man if he could take his portrait and then he handed him a piece of paper asking him to write a few words about himself. Kalman was surprised when the words said ‘this man’s a lady.’

From this one encounter it prompted Robert to work on an exhibition and dedicate it to his sister, Hillary Kalman, who was also a lesbian and died 10 years previously.

He decided that with every portrait the model would write a few words about themselves that would also be displayed with the portrait.

The Exhibition opens on September 23rd at The Stonewall Museum and will run until November 2nd.

Kalman said that he remembers when his sister came out in 1976 and said no one was very positive, especially her Mother.

Our mother wrote a hideous note that I preserved as a photograph. The note read ‘Hillary, I didn’t realize how much you hate me. Mother.’ “

The note will also be displayed in the exhibition next to Hillary’s photograph. Kalman said that he didn’t want the women smiling in the photo as he wanted to see the real them, but he goes on to say that many women express happy feelings in their notes and most are positive. Robert thinks that his sister would be happy to hear that after the difficulties she went through herself.

All the photographs are in black and white and Robert stated that he would only take two pictures as this was enough to capture the essence of the women. Kalmen worked with his wife on the project who would approach the women and ask if they would be photographed. He states that women feel less threatened if another women approaches them rather than a strange man they don’t know.

Robert says that his subjects are important to him and stated:

I have an emotional response to people, and I want to photograph them. When I stop a person, it’s for a reason. It’s because something about that person resonated with me.”

Don’t miss seeing this exhibition and admission is also free.

“I Am Here: The Lesbian Portraits” will be on exhibit Sept. 23-Nov. 2 at the Stonewall National Museum, 2157 Wilton Drive, in Wilton Manors. Robert Kalman will speak during an opening reception at 6 p.m. Friday, Sept. 23. Admission is free. Call 954-763-8565 or go to Stonewall-Museum.org.