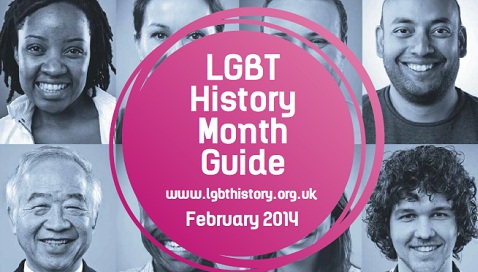 LGBT History Month is an event first marked in Scotland a mere nine years ago to coincide with the abolition of Section 28, which prohibited local authorities and schools from discussing lesbian, gay, bisexual or transgender (LGBT) lives. LGBT History Month is managed and promoted by LGBT Youth Scotland, the largest youth and community-based organisation for LGBT young people in Scotland.

Why should we care?

LGBT lives and culture should not be simply tolerated but, in fact, celebrated and incorporated into our daily lives. And as Scotland opens its doors to the world in 2014 through high-profile events such as the Commonwealth Games and Homecoming Scotland, the importance of working together takes on an even greater significance.

More people than ever care about LGBT rights. Since its launch LGBT History Month has grown in size and scale to become an annual cultural celebration of LGBT creativity, and with more than 60 events planned for 2014, this year promises to deliver an exciting, ambitious and accessible programme of events for everyone. Debate and discussion can’t take place in isolation, and the fact that so many mainstream organisations across Scotland are committed to planning and delivering events throughout the month needs to be acknowledged and applauded. Next month, for example, Edinburgh and Lothians Regional Equality Council (ELREC), Midlothian Council and LGBT Youth Scotland invite you to an evening of celebration and dance at the National Mining Museum; South Lanarkshire council will fly the rainbow flag from no fewer than four locations across the local authority area; and Forth Valley college play host to artwork from the three local LGBT youth groups, to name but a few.

Who are you targeting?

Put simply, everyone. The success of LGBT History Month in Scotland is down to the fact that it’s remained true to its values: History Month provides a platform for showcasing the very best of LGBT culture at not only a national level but also locally and regionally, in community groups and through youth organisations. In doing so, its reach has extended far beyond LGBT-specific groups into mainstream organisations, including the British Transport Police, local authorities and the NHS, further and higher education, universities, colleges, schools, and the third sector.

Our mission is to “empower lesbian, gay, bisexual and transgender young people and the wider LGBT community so that they are embraced as full members of the Scottish family at home, school and in every community”.

What can we do?

To find out more about how you can get involved in LGBT History Month, or to see what events and activities are happening locally in your area, visit us at www.lgbthistory.org.uk. Alternatively, why not take part in our #lgbtsmallsteps campaign, which encourages individuals and organisations to celebrate the small, personal ways people have marked the month?