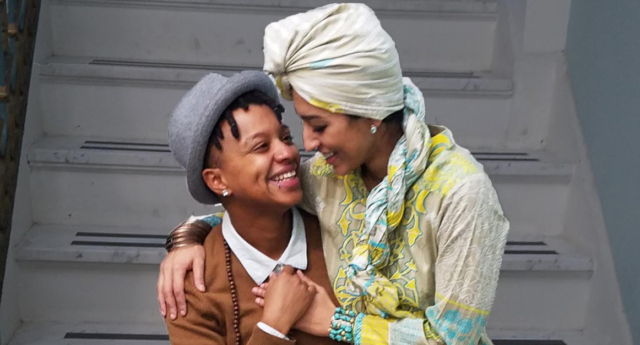 Laila Nur and Saba Taj decided to get married in North Carolina to send an important message of love to Donald Trump about sustaining equal rights.

We decided to get those papers in order to be able to be there for each other in the future, in order to ensure that we could both be legally recognised as parents if we decide to become parents again. So that we can have more options for health care in case the Affordable Care Act is overturned.

The reality of health care, reproductive rights and our civil rights being at risk really sunk in. Gay marriage has been legal in North Carolina for a very short time, and just like so many of us were caught off guard by Trump’s win, we didn’t want to be caught off guard again in case this right was stripped from us.”

The couple got married in a small ceremony of just four people at a courthouse in their home.

We got married in the courthouse of the city where we live, love, and resist. There’s something really beautiful to me about simplicity, and this experience was simple and beautiful.”

The two had previously debunked the idea of marriage because they viewed it as a “heteronormative practice rooted in a capitalist system.”

However, in light of a Republican dominated house the two decided they would secure their rights while they still could.

America is facing the demons in the closet. The right-wing is unifying around their vision of a New Confederacy, what are we bringing to the table to fight that?”