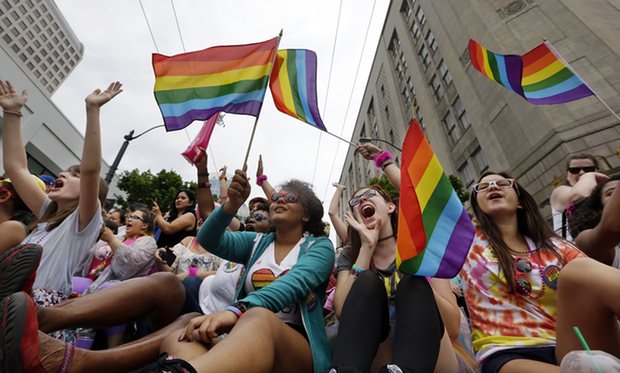 More than fifty years ago, President Lyndon B. Johnson signed the historic Civil Rights Act, promising equality for Americans. Well, most Americans. Title VII of the act prohibits employers from discriminating on the basis of race, sex, color, religion and national origin – what about members of the LGBT community? On this matter, the Civil Rights Act was deafeningly silent, and has remained that way for decades.

However, federal judge Cathy Bissoon recently ruled that the Civil Rights Act should include sexual orientation.

Judge Bissoon sided with the US Equal Employment Opportunity Commission (EEOS) in stating that because “sex” is currently included in the Civil Rights Act, “sexuality” falls under sex and merits inclusion as well.

Writes Bissoon, “There is no more obvious form of sex stereotyping than making a determination that a person should conform to heterosexuality.”

She goes on to say that if an employer judges a person because of his or her romantic partner, then the employer is enforcing stereotypes about “proper” male and female roles within a relationship. Enforcing gender roles is, of course, sexist.

That someone can be subjected to a barrage of insults, humiliation, hostility and/or changes to the terms and conditions of their employment, based upon nothing more than the aggressor’s view of what it means to be a man or a woman, is exactly the evil Title VII was designed to eradicate.”

How did LGBT rights and the Civil Rights Act finally make it on this judge’s radar? A brave man named Dale Baxley decided to speak up.

Baxley worked for the Scott Medical Health Center until daily harassment drove him to leave his job. His supervisor called him homophobic slurs and asked him about the mechanics of gay sex. Imagine clocking into work just to have your boss greet you with, “Hey, f**cking f**got.”

Instead of putting his head between his legs and finding a new job, Baxley filed a lawsuit against the health center, contending that the supervisor’s hate speech was in violation of the Civil Rights Act. By siding with Baxley, Judge Bissoon has achieved a historic win for LGBT rights.

Well, let’s be honest, LGB rights. The “T” is still under fire in states such as North Carolina, where the HB2 bill declares that people must use the bathroom corresponding to the gender listed on his/her/their birth certificate. Across the country, court opinions are divided over whether the Civil Rights Act’s “sex” provision includes transgender people.

So what’s next for the Civil Rights Act? Because of the unprecedented ruling, legal experts are speculating that Baxley’s case may go all the way to the Supreme Court. If the Supreme Court sides with Judge Bissoon, this will be a groundbreaking move forward. Still, we should celebrate the current ruling while remembering that there’s still a lot of work to be done, especially when it comes to transgender rights.

PrevPreviousBroken But United: The LGBTQ Community In A Trump Presidency
NextThe Necessity Of Gender Neutral Sports For Non-Binary PeopleNext