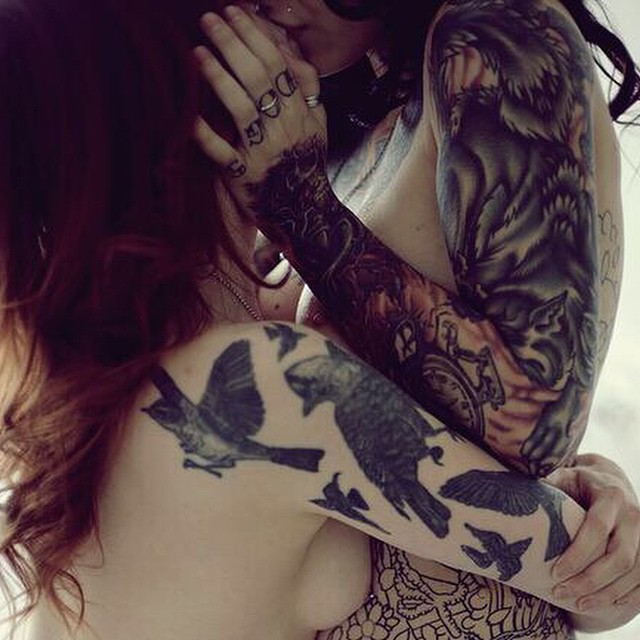 As lesbians (or bisexual women), we are members of a community of women who – literally – strive to know each other inside and out. We’ve got similarities and differences, no different than anyone else, and there are people who apply stereotypes to the entire community and basically “hope for the best”. This is true of everyone; we’re all subjected to unwanted assumptions about our lives.

With lesbian sex, though, these assumptions are not only unwanted, but occasionally downright offensive. How many of these have you personally helped contribute to? Do you have more to add? Drop them in the comments section!

If the idea of scissoring turns you on, I definitely encourage you to try it. Just don’t expect it to work out like it does in the films, especially if either you or your partner is on the bigger side. Truthfully, manipulating your body so that you can receive pleasure from vagina-to-vagina contact is really freakin’ hard and will require you to stretch beforehand. (Seriously – sex injuries are real and can actually put you out of commission for a long time.) More than that, not everyone even enjoys it – so if your partner doesn’t, don’t beat yourself up. It’s probably not you – it’s your unrealistic expectations about scissoring.

In conclusion, scissoring is something that some lesbians participate in, but there’s nothing wrong with you if you don’t like it.

Myth #3: Lesbian Bed Death is an inevitable outcome of all lesbian relationships, and doesn’t affect any other type of couple.

Think of every lesbian couple you know: Has their sex life slowed down? Of course it has – it’s gotta be the LBD rearing its ugly head yet again. Apparently, all couples go through it, and there have even been studies that showed that lesbians in long-term relationships have sex much less frequently than heterosexual couples or same-sex male couples.

The trouble with these studies is that they often don’t keep track of all the variables they probably should. For example, the average sexual experience involving a man lasts about 13 minutes, whereas the average sexual experience that doesn’t involve a man lasts for about 45 minutes. This is due to differences in anatomy, for the most part, as men in general can’t last as long or have as many orgasms in a single session as women can. Sure, there’s always foreplay, but this brings the question: Does foreplay count as sex? And if it doesn’t (because not everyone has the same definition for “sex”), are the actual counts for how often we have sex even reliable?

I think the definition of what “counts” as lesbian sex is one of the biggest variables here, because if you ask 100 different lesbians what their definition of “sex” is, you’re bound to get a few different ideas. Personally, I think it counts as sex as long as at least one of you reaches orgasm – but that’s not the only definition. That’s just my definition. Because of all these different definitions, how can you possibly quantify the different answers you get?

In conclusion, we might not have sex as often, but we have sex better… And that’s what really counts, right?

Myth #4: Lesbianism is all about sex, anyway.

This is one that’s usually perpetuated by straight men, or by bi-curious women who think that their resident lesbian friend is just like them. Add the labeling of “lesbian sex” to all those pornographic videos that are really bi-curious sex, and you’ve got a bit of confusion going on here.

The truth is, most lesbians couldn’t really care less about the sex. Sure, it’s a nice bonus that sex with a lesbian is better than sex with a man (based on the few measurable statistics here, and based on personal preferences), but very rarely is the relationship all about sex. Why, then, would the entire identity be about sex? Simple: It’s not. In fact, there are even women who identify as homoromantic-heterosexual, but not “bi” – and there’s nothing wrong with that, as long as their consenting-adult partner(s) agree.

Many (but far from all) of us will start to explore the sexual feelings as a basis for our romantic feelings, and often these two separate identities will relate to one another. That doesn’t mean it’s the same for everyone, though, and there really are no right or wrong answers. But, usually, if someone’s in it just for the sex, they’ll stick with the “curious” label and that’ll be the end of it.

In conclusion, sex doesn’t play a bigger part for lesbians than it does for anyone else.

Okay… I’ll admit that I’ve helped perpetuate this idea, too. The idea is that, as women, we have an inherent knowledge of what other women like to have done to them, and that we’ll never have those “selfish days” where we really want to get what we want without giving anything in return.

You guessed it, though: This isn’t the case. Everyone’s interests are different, so unless you and your partner are 100% compatible (which you won’t find out until you’re actually sexually active with that person), it’s all guess work. The first tip most people are given is to try doing what they like and see if their partner likes it, too – but there are no guarantees.

Aside from that, there is the fact that some women have never experienced sex with a woman or a man. These women will understandably not have the same skill level as someone who’s had a bunch of partners, or even the same skill as someone who’s had one previous partner. Sex is a learning experience not unlike any other, and while we’re usually responsive to the “common signs of arousal”, there’s still a lot of communication that goes into a great sexual encounter.

In conclusion, lesbians are only good in bed if they’ve learned how to be good in bed.

Myth #6: Lesbians want to share the sordid details of their sexual conquests with you.

It never fails: Someone (who’s not a lesbian) hears that you’re a lesbian, and your sex life becomes the topic of conversation within the first ten minutes. Whether the person is applauding you for “getting past the boy drama” or drooling over the thought of you going down on someone else, they want to hear everything about what happens in the privacy of your bedroom.

For most lesbians, though, our sex lives are not a topic of discussion. In fact, even though I write about my sex life on a fairly regular basis here, if you ask me sexual questions on any other site you find my profile on, I’ll probably not-so-politely let you know that you are being incredibly disrespectful. It might seem like a bit of hypocrisy, so let me put it another way. A doctor isn’t going to treat you for free just because you catch him outside of business hours. A bagel shop won’t give you a freebie just because you come by after they’re closed. And I’m not about to hand out details of my sex life unless I’m getting paid to do so. It’s pretty simple, actually.

From a “reasonable human being” standpoint, it’s pretty rude to invite yourself into personal parts of anyone’s life, unless that part of their life directly pertains to you. That means even if you’re dating someone, the only part of their sexual history that’s your business is their sexual health and whether they’re being monogamous or not. Really. That’s it.