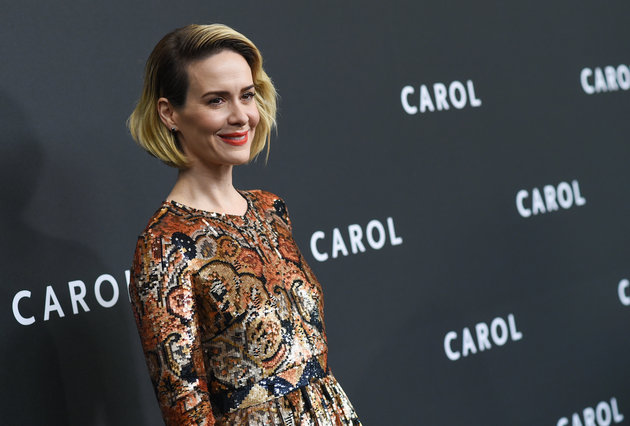 Sarah Paulson is not only one of our favourite actresses in Ryan Murphy’s FX hit American Horror Story, but she is set to shine in Carol this weekend, as Cate Blanchett’s former flame, Abby.

She recently sat with Pride Source to reflect on her accidental coming out experience, the on-going debate whether actors need to be gay in order to play gay, and her convictions over who she is.

I refuse to give any kind of label just to satisfy what people need.”

In 2005, when then-girlfriend Cherry Jones was named a winner at the Tony Awards, Paulson planted a sweet kiss on Jones’ lips and outed herself to the world.

On the aftermath of coming out Paulson had this to say;

The truth of the matter is, it was early enough in my career that there have been no attachments made to me as a performer. I think the thing that makes it somewhat easier in terms of there not having been ramifications is that I’m a character actress—nobody is assigning a particular kind of sexual anything to me, I don’t think…it just seems if you’re sort of known for being a sex kitten…then you end up being a total femme fatale actress, and then all of a sudden you make a statement about your sexuality, it becomes news. Whereas I’m a character actress; I can do a lot of things. I don’t think anybody’s made one particular association with me that would then make them go, “Well, I can’t see her this way now.”

I do think it’s more important, and I know that Matt Damon got a terrible amount of flak for the way he phrased those things (earlier this year, he said: “People shouldn’t know anything about your sexuality because that’s one of the mysteries that you should be able to play.”), but the sentiment is still true: My personal life… I’m not gonna hide it from you, but I also don’t want you to think about that before you think about the character I’m playing. And so I want that to be of paramount importance – it’s of paramount importance to me that you believe the story I’m trying to be a part of telling you, and if my personal life is going to get in the way of that, I don’t like that at all.

On Carol and how people assume Cate Blanchett must have had relationships with women in order to portray a lesbian:

Is anyone asking George Clooney what he likes about having sex with a woman? Nobody does. It’s a foregone conclusion that it’s just an acceptable reality and nobody thinks to bother to ask. But you have a story about two women together or two men together and all of a sudden it becomes fair game and assumptions are made that are just never made in the reverse, and I just think it’s terribly unfair.

Why is anyone making assumptions about anything about anybody’s life? It’s a funny thing when actors complain, like, “I didn’t ask for this; I just wanted to act.” Well, in a perfect world we’d all just be able to act and none of this would be part of it, but it is a part of it—this is part of it—and on some level, it comes with the territory. But on another level, you can be responsible and you can control what you will talk about and what you won’t talk about. Either you live your life in a very private way or you don’t, and I never have done that—ever—and I won’t do it going forward. I also won’t serve it up on a platter for someone to feast on, because it’s mine.

About her experience working on a movie, and how it reflects on her own sexuality, she added.

What it really made me think about is the power of love and how, at the end of the day, love is love, period. The end. It sounds cliche, but I think most cliches are cliches because they’re very, very true. And it’s very interesting, because I’ve been with men and women, and (the movie) puts a very fine point on that truth, which is that it’s very personal and that love is love, and sometimes you love a person you weren’t expecting to love – and how glorious is that?

Because I refuse to give any kind of label just to satisfy what people need. I understand that everybody wants to have a person to look toward that is actively making change around this issue, and I understand for young people coming out they want to attach that hope to a particular person, but I think that honesty is the most important piece of this for me.

All I can say is, I’ve done both, and I don’t let either experience define me. I don’t let having been with a man make me think I am heterosexual, or make me want to call myself that, because I know I have been attracted to women – and have lived with women. So, for me, I’m not looking to define myself, and I’m sorry if that is something that is seen as a rejection of or an unwillingness to embrace (my sexuality) in a public way, but it’s simply not. It’s simply what’s true for me, and that’s all I can speak to.

On being a LGBT role model, she added.