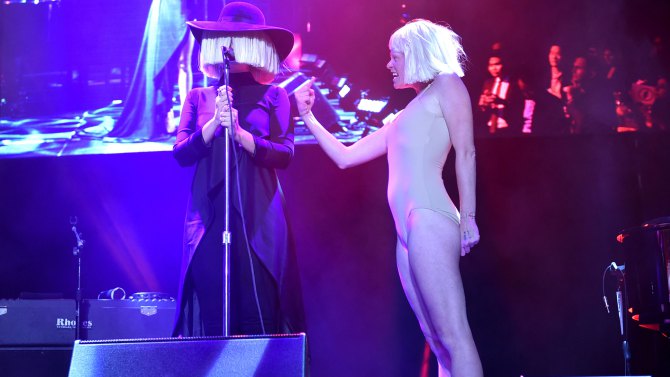 Los Angeles LGBT Center held “An Evening With Women” fundraiser at the Hollywood Palladium on Saturday, and in a whole host of celebrities were in force to support.

Sarah Silverman performed her always shocking jokes about rape and her vagina. Other performers at the event included the singer Sia and the band No Doubt.

Talking after the event, Silverman said

It’s always a blast. It’s nice to be in a room of like-minded people. That sounds very elitist, but it’s really very inclusive. It’s a great crowd, and it’s a room filled with people I admire.”

Following Silverman’s standup, Sia took the stage wearing her signature face-obscuring wig, which she removed following her three-song set to thank the audience.

Comedian Fortune Feimster pointed out that the night was important because it was all about powerful women before joking, “I’m just impressed to see any lesbian leave their house.” She also got to kiss Silverman, taken to facebook with the following message…

In the spirit of raising money last night for the LGBT Center in LA, Sarah Silverman made out with me! Yay fundraisers!

“I’m so proud of our LGBT center in Hollywood. It’s so important to these kids across America who don’t have access to this whatsoever. They can’t even tell anyone in their own town. And here we are with these safe, beautiful places for kids to go. It’s fantastic.”