She’s Just Not That into You: 5 Signs You’re More in Love Than She Is 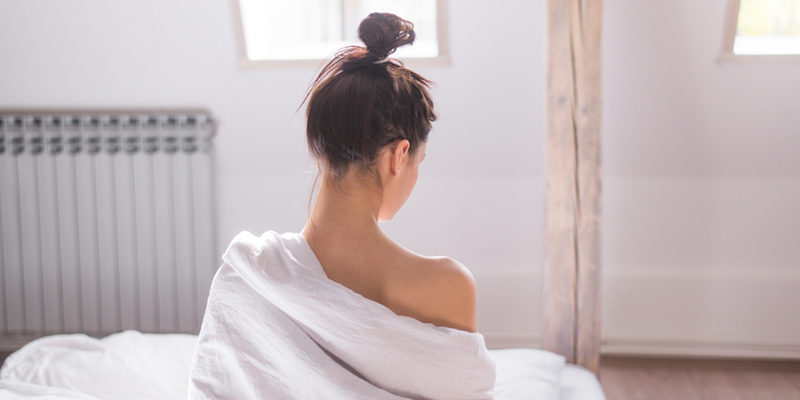 In a relationship, it’s completely normal for one person to be feeling it more than the other. In fact, if you two are in total sync, all the time, chances are there’s nowhere for the relationship to grow. But what do you do when one of you is feeling it way more than the other? This causes severe pain and heartbreak, since one person is totally invested and the other might not even care if they wake up tomorrow and it’s all gone.

Thankfully, most of the time, this off-balanced-ness is just temporary. From month to month, day to day, sometimes even hour to hour, there’s a constant ebb and flow that leads to the two of you doing what you can to keep the spark alive. If it’s unnatural for one of you to feel more in love than the other, don’t worry – that’s just a sign that you’re actually in it for the long haul. However, relationship coach and therapist Kristy De Leon recommends that you pay attention to this balance between you, and identify when the scales start tipping a little too far.

According to De Leon, “Depending on what is going on in the relationship, one person will typically feel like they are giving more love than the other person. But it is crucial to realize that these are moments, unless of course the partner has become physically or mentally ill. Then the person must decide if they want to be in this kind of relationship and can accept the new limitations on their partner’s affection. Or, if the person feels like it has been months now that they are putting in the majority of the love and effort, then it is time to talk. It is not healthy for the person or the relationship to be one-sided. Then it is not a healthy relationship; it’s an arrangement out of convenience.”

Are you worried that your relationship might be headed off to that one-sided land of dread? Check out the following list to see what some of the big signs are – and what you might be able to do about them.

Picture the scene: Your friends want to go on a big trip, but your girlfriend proposes a spontaneous romantic getaway that has to happen at the exact same time. When you propose going out with your friends on a different weekend, that idea is shot down too – compromise is not on the agenda today. Since you love her, and you love how assertive she is about what she wants, you give in. Over time, she learns that she doesn’t have to compromise, because you’re going to do whatever she says anyway.

Even if this starts out with the best of intentions (as hard as it is to be selfish with good intentions), it’s going to turn sour. Relationships are supposed to benefit both people, otherwise, why be in one? If you’re doing all the work and she’s just making all the plans – regardless of what you want to do – it might be time to walk away. She doesn’t want a girlfriend, she wants a puppet, and you’re giving her exactly that.

Sign #2: She never hits you up – you have to take the first step every time.

Let’s look at another scene now. You and your girlfriend talk every day, and it’s great – but you can’t remember the last time she texted you without just replying to something you said. You make the plans and then have to chase her down for a response. You send her a “good morning” text, and then wait around for her to respond. It could just be that you’re quicker to get to your phone – but it could also be a sign that she’s just going through the motions, knowing that you’re going to pick up the slack.

Want to see if she’s really just following along because “that’s what you do”? Make a point to not text her first for a period of time. Be careful with this one, because it is a bit of a mind game, but the woman who’s truly “just a little busy” will probably hit you up when she has a chance. If days go by before she realizes that you haven’t made any effort, you might need to evaluate why you’re with her. You’re not really keeping her happy – you’re just keeping her entertained. (The difference is subtle, but definitely there.)

Sign #3: She forgets the important milestones in your relationship.

When a woman is in love, it’s our tendency to remember all the little details that make the relationship special. Things like the first kiss, first date, and first wall-crawling-intense orgasm are going to be ingrained into her head, and while she might not remember every last detail, she is going to make a point to remember the things that are important. She’ll probably share these things with her friends, too, which isn’t a sign of loose lips – it just means that you’re important to her.

On the other hand, if she’s forgetting all of them, it probably means that you aren’t that important to her. The list doesn’t need to be tit-for-tat, with each of you remembering every single thing that happened, or even an exactly equal spread. Most likely, some things are going to be more important to one of you than the other. But if you have to bring up every important occasion before she’ll make a note of them, chances are, she’s not that into you.

Okay, so the whole world doesn’t need to know all your business. I totally get that, and I totally agree. But when you love someone, you’re going to want to show them off – at least to some extent. (I know, there are private people out there. I’ve never really been one of them, but whatevs.) This is particularly a bad sign if she removes the official status on her social media accounts after they’ve already been there – this could be a sign that she’s opening herself up to other options.

She definitely doesn’t need to post a thousand pictures of the two of you together (and if you post a shit-load of “us-ies”, you might need to cut back). But if you’ve been together for more than a few months and she doesn’t have one single mention of you anywhere on her social media profiles, there could be a cause for concern. If she’s not letting others know that she’s in a relationship, there might be a reason for it.

In the beginning of the relationship – the honeymoon phase, if you will – it’s normal to want to be together as much as possible. But there’s a big difference between “going out a lot” and “spending every waking minute together” – and if one of you wants to hang out daily and the other only wants to chill once a week, or even just a couple times a month, there’s a good chance that your expectations are mismatched. It’s possible that she’s brushing you off because she’s not into you at all, but it’s also possible that you’re smothering her.

Try to take a step back from things, and give her some room to breathe. If she responds by approaching you when she’s got a bit of free time – and it’s not just for sex or a party – you were probably just asking too much from her. If she responds to your radio silence with even more radio silence, she’s probably not that into you. Unfortunately, we can’t really control how our feelings develop for a person, and too much togetherness can seriously put a damper on the process of getting to know each other. It’s possible that it’s too late to fix things – so try to keep a level head, and avoid smothering your next partner, too.