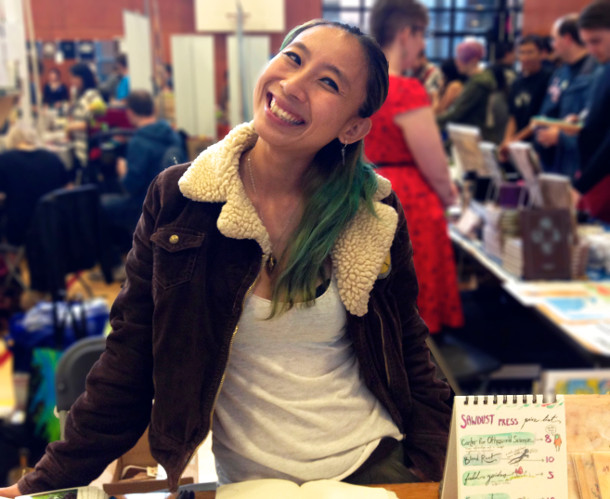 What do you think of when you think “political art”? Do you conjure thoughts of pro-Trump graffiti or anti-Trump caricatures? Do you think about the lettering on protest signs? Do you imagine thumbing through an airport political thriller?

What about a doodle of a person making a cup of tea and watching House of Cards?

Your first thought is probably, “That’s not political.” But for queer people, disabled people, transgender people and people of color, the personal is the political. Creating art about minorities living everyday life is radical precisely because it’s so rare – minority voices are severely underrepresented across all creative fields in the United States. To make art about a minority, even if that person is just clipping their toenails, is radical because it says: Our existence matters.

After the 2016 election, the political dimension of her work has risen to a whole new level. You’ve probably seen her drawing, Resistance Auntie, which recreates the iconic election photo of an elderly Asian woman thrusting her middle fingers in the air. Shing’s drawing went viral, and it inspired a new project: a drawing a day.

So far, she has captured heartbreaking images of children killed by Donald Trump’s Administration; the first drawing was of an eight-year-old Yemeni girl killed in the recent failed raid.

She’s also raised over $2000 for the ACLU with an all-night drawing marathon where she drew over 40 images of the Statue of Liberty.

For a while, Shing struggled – and still struggles – with the question of whether art can have a meaningful activist impact. She considered leaving art in order to become a civil rights lawyer. She briefly considered going to a protest, but her severe anxiety made that difficult. Instead, she draws. And her drawings change lives.

We need artists. We will always need artists. In trying to prevent our worlds from imploding, we can’t forget to also continue make progress towards the world that we want to live in. For me, that is a universe full of equality and justice, but also beautiful art and good stories that explain the diverse and exciting human narratives that we all embody.”

Let Shing inspire you daily at her official website.