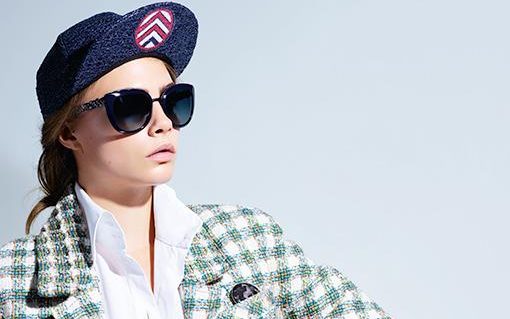 It would appear Cara Delevingne has been coaxed out of modeling retirement by Karl Lagerfeld, to become the face of Chanel’s SS16 eyewear campaign.

Sporting sunglasses and glasses, along with tweed and backwards caps from Lagerfeld’s airlines-themed collection, Delevingne channels her Tomboy chic style.

In an interview with The Sunday Times, Karl Lagerfeld said of Cara

She’s a character. She’s the Charlie Chaplin of the fashion world. She is kind of genius, like a character out of a silent movie. I would see her better in a silent movie than a talkie because she over-accents the movement. Girls admire her like they used to Kate Moss. They all want to be as free as her.”

Delevingne has closed numerous of his shows as the prestigious ‘couture bride’, fronted a number of his campaigns for both Chanel and Fendi  – where he is creative director – and now she has ‘retired’ from the catwalk, she is a key feature of all his front rows.

At the Chanel Haute Couture show in February, Karl even permitted her to bring her dog Leo to the front row.

The model turned actress has said recently that modeling has never been her main passion.

What bothers me, I guess, is when I get these messages from girls on Twitter, and they’re like, ‘God, you’re my idol, I really admire you.’ It’s like, ‘Admire me for what? What have I done?’ It’s not that being in a Burberry campaign, or walking in a Chanel show is nothing. It’s just… I know I can do more”