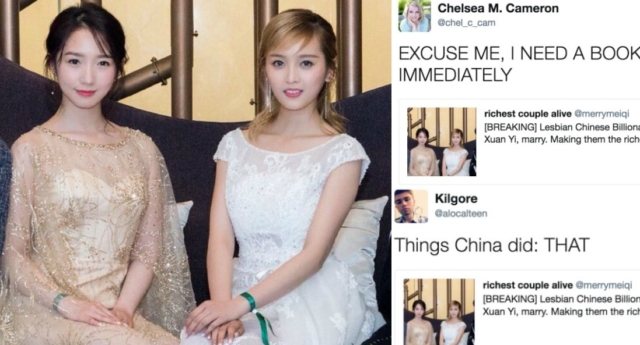 A tweet about two lesbian Chinese billionaires who got married and became the world’s richest couple alive recently went viral with more than 20,000 shares.

A tweet was posted with an image of two women attached, and within hours the internet was convinced of the stunning love story.

But Alas it was fake news (or fan fiction).

And it turns our neither of the women are billionaires, and they are not in a same-sex relationship with one another.

They are, however, members of the South Korean–Chinese band Cosmic Girls, also known as WJSN.

The photo that convinced the internet of their marriage had been taken earlier in the week at the Beijing International Film Festival. It showed the two women in flowing dresses – which the fake tweet made to look like wedding dresses and cropped out two men.

The teenager behind the original tweet, Abby Fry, explained to BuzzFeed News that she came up with the joke because she thought it would amuse ujungs, WJSN’s fan group, and never expected it to go so big.

I thought they looked like they were at a wedding with the dresses they were wearing, and the dresses sure looked expensive. She said that she thought people would fact-check first, but added that it “just shows the power of what we want to happen.”