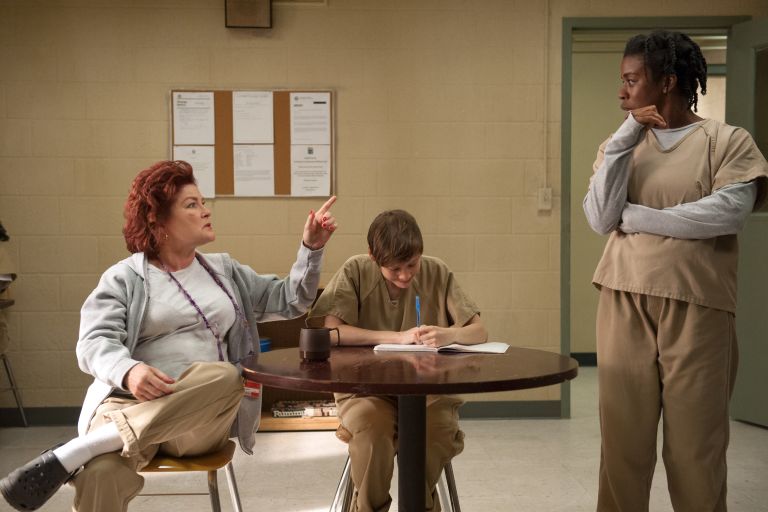 Only a few weeks left before Orange is the New Black season 3 premieres on Netflix, cast and creators were out in force over the weekend at the at Netflix red-carpet premiere of the third season.

After the screening, the principal cast and creator Jenji Kohan stuck around for a Q&A at the Dramatist’s Guild of America. They discussed the premiere and the themes at play in the season to come, and dropped more than a few hints about what fans should expect.

Before we delve too hard into the spoilers, here is a quick recap of what we already know:

We found out last October that season three is going to be at least in part about an exploration of faith.

Orange is the New Black‘s book author and show consultant Piper Kiernan said in an interview.

One of the things that Jenji Kohan has said about season three already on record is that an exploration of faith is a big part of what she is planning and what they have scripted so far….[the new season] holds some really amazing stories and twists and turns.

And while the trailer shows a very disappointed Alex, “OITNB” season 3 updates reveal that it will certainly get hot in Litchfield as a steamy Alex and Piper scene is underway. The sex scene will not be anything new to fans of the show, but knowing how Alex and Piper have seesawed in their relationship, it will be something to watch out for, spoilers teased.

Australian actress / model Ruby Rose, will play a sultry inmate named Stella. Stella turns out to be a love interest for both Piper and Alex, so, if you thought that that particular drama wouldn’t return with a vengeance, think again.

We also already know (and can celebrate the fact) that Jason Biggs is not returning to the show. Larry has long been the most-derided part of OitNB, and his departure brought cheers from all across the internet.

Pornstache, another character fans of the show most love to hate, is not going to be in season three, as actor Pablo Schreiber already signed to work on another show. Pornstache’s mom is going to be a character, though, and she’ll be played by Mary Steenburgen.

As far as new information, here’s what we found out at the DGA unveiling. According to Kohan,

[Season Three is] lighter than season two, it’s a season of faith, it’s a season of motherhood, it’s a progression of everyone’s stories. I think we get deeper into our characters and we meet people….It’s very important to me to play in both [comedy and drama] because I don’t think anything is all serious or all humorous. I remember watching dramas and thinking when there was no humor or no comic relief that they didn’t reflect any sort of reality because there’s no such thing as life without humor. (But) you need a dramatic spine to hold it together.

To the frustration of fans everywhere, Kohan did not state whether Vee lived or died at the end of season two. In fact, she only addressed the question with quiet smiles.