How To Stop Your Pets From Killing The Mood 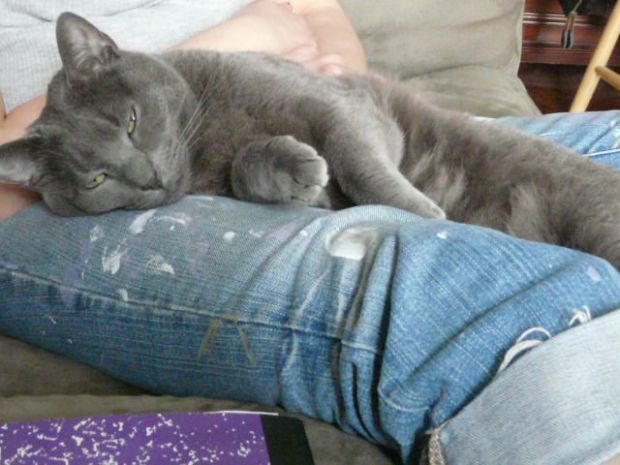 Pets are great, aren’t they?

About a month or two ago, I had a little situation with my anxiety. No one was home except me and my dog, and my entire body was racing over who-knows-what. I was on the verge of tears, and my dog seemed to know exactly what to do to help calm me down. I don’t think I’ve ever been quite so grateful to have her around.

Then, not even a full week later, she invited herself up into my bed at the worst possible time, and adamantly tried to wiggle herself in between my girlfriend and I. We’d forgotten to put her to bed before beginning our romantic festivities. If you’ve never been violently shoved out of the mood by a pet, let me tell you… It’s pretty awkward.

This isn’t even the first time my dog has done this, either. When she was little, we’d have to stick her in a kennel before getting intimate… All because one time she started trying to nurse on my exposed nipple. As awkward as bad-timing-cuddles are, wrong-species-nipple-licks are the absolute worst. (Well, I’ve heard it’s even more awkward if your pet actually physically touches your genitals, but this is something I thankfully haven’t experienced.)

She’s not even the first pet that I’ve had that tried to get involved, either. An ex-girlfriend had a dog that would try to hump the leg of whoever was humping on his bed. A Chihuahua I used to own would (audibly) cry from the corner of the room the second the pants came off. Once I even dated a girl whose cat would sit on the headboard and watch. (We mostly had sex at my place after that.)

According to pet lifestyle expert Wendy Diamond, some animals just react strangely when they see their pet parents getting it on. “Some dogs are not phased by their owner having sex in front of them and do not exhibit behavioral signs of excitement or stress.” In cases where the pet does act out, she says it’s likely based on territorial guarding. She says that this territorial guarding “can cause some dogs to think that their pet parent is being attacked by his or her sexual partner, on what the dog believes to be his bed.”

So, essentially, when your pets ruin the mood, it’s because they love you. Or something like that. They don’t exactly understand the concept of human sex, but they do see the things that their parents do, and in some cases may try to mimic that behavior, in an effort to not be left out.

Obviously, that’s not the type of playing you want to do with your dog, so let’s explore some of Wendy’s tips to see what you can do to keep this from happening again.

Option #1: Remove the pet from the bedroom.

Sometimes, the simplest solution is the one that works: Take your pet out of the bedroom when you’re going to be intimate – either with yourself, or with a partner. Some pets will become excited, as they think you’re playing. Others may be aroused, although they probably don’t understand why. Still more are doing it to express dominance – whether over their owner or the bed. This type of loyalty is one of the things we love about our pets, but that doesn’t mean we want it when we’re trying to get busy.

Unfortunately, in issues of dominance or separation anxiety, it might not be helpful to put the dog out of the room. Your dog may whine and scratch at the door, which isn’t exactly going to help things along in the bed anyway. While he’s not getting in on the action, he is a major distraction to you. So what do you do now?

Option #2: Train the dog to stay off the bed.

Okay, so I’ll admit: This is another sort of obvious answer. If your dog normally sleeps in the bed with you and your partner, she may feel that the bed is hers. This isn’t normally a problem, but when she thinks that you’re trying to do harm to the thing that she thinks is hers, she’s going to act up. (Keep in mind this is coming from someone who had to bottle-raise her own dog… We’ve dealt with some separation anxiety problems over the time she’s been alive.)

Training your dog to stay off the bed isn’t as difficult as you might expect, but it will require that she has a substitute bed of her own. My dog has a bright pink kennel with a giant comforter in the bottom, but she’s a bit spoiled, too. You should also keep things in the kennel that make your dog happy, to encourage her to go in it on her own. It usually only takes a few weeks to train a dog to go to their own bed, as long as you stay consistent.

If the dog is too old to be safely spayed or neutered, or you choose not to get them fixed for other reasons, obedience training may help. After all, it’s not really about sex – it’s about their reaction to the sex.

PrevPreviousAccording To New Study, 1 In 4 Straight Women Have Sexual Experiences With Other Women
Next8 Things You Should Do After Your Breakup, Instead of Looking for a ReboundNext