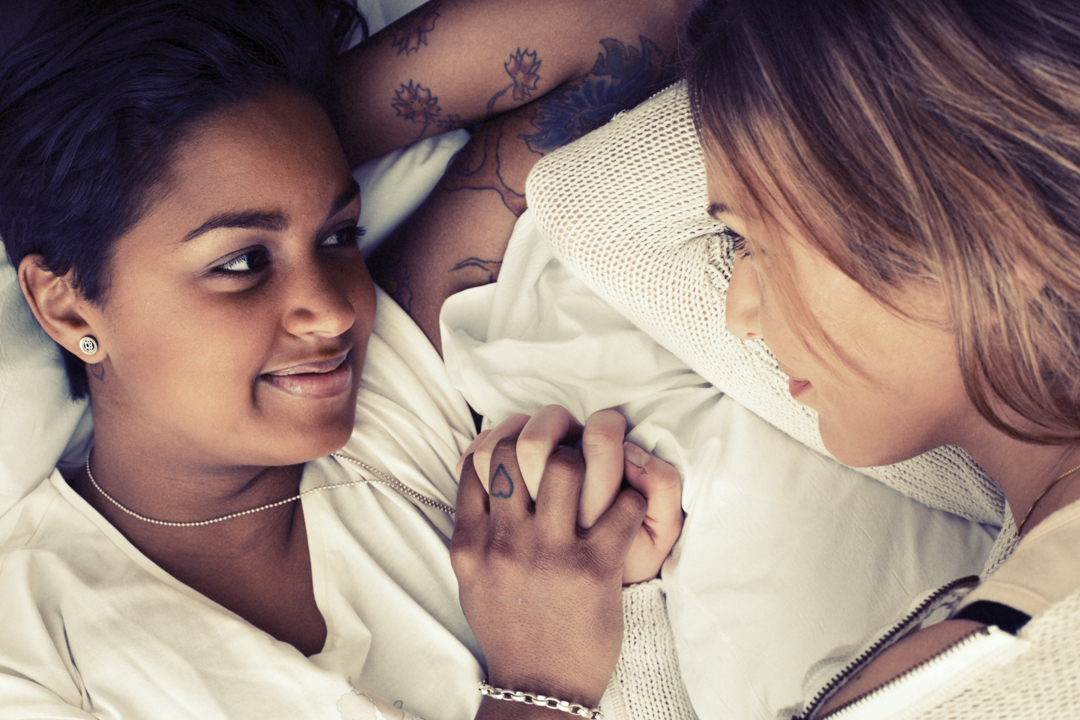 Relationships can be scary sometimes. (Hopefully it’s more of the amusement-park variety of scariness, and not the serial killer variety, of course.) Of all the scariest times, the first time you guys have The Talk about moving in together is probably one of the scariest. It’s a place I’ve been a few times now – sometimes, it resulted in us actually moving in together, and sometimes it didn’t. There’s a lot of talk about when “the right time” is – but truthfully, it’s different for everyone, and every relationship.

And sometimes, your brain gets stalled right before you have The Talk. (Because, let’s face it, sometimes The Talk is almost as scary as actually doing it.)

If you’ve ever found yourself stuck in this place, you’ll know exactly what I’m talking about.

You know you love her, and maybe you’ve already said it – but maybe you haven’t yet. You know you want to be with her for the foreseeable future, but you’re not sure if you’re ready for that to mean all the time. You know that, financially, it’s cheaper to share the rent – and maybe you’re at a point in your life where that has a lot of pull. But, maybe, you’re not sure if the pros outweigh the cons.

Sorry to be the bearer of bad news, but they don’t. At least, not on their own. That’s exactly why your brain latches onto everything that could go wrong – there are a lot of things that could go wrong. If you’re someone who struggles with anxiety or insecurities, it can be even more difficult. Thankfully, there are some ways you can get around some of the biggest issues, and push yourself that last little bit to bring up the topic – if it’s the right topic to bring up. (Spoiler alert: It’s not always a good idea.)

Struggle #1: You want to wake up to her, but you’re not ready to give up your personal space.

It’s an unfortunate fact: Living with someone else almost always means that you’re going to have to sacrifice some personal space. If you can afford to pay rent at both places (or if you’re both managing your rent comfortably without each other), it’s completely acceptable to keep your own space. Truthfully, financial hardship is one of the worst reasons to move in with your significant other, so realistically, you should be able to afford your own space, otherwise there are going to be even more unnecessary strains on your relationship.

When my current girlfriend and I started getting serious, I spent most of my time at her place instead of my own. Truthfully, I had some terrible roommates – one even went so far as to make a very strong pass at my girlfriend while she was drunk, and another had a boyfriend who stole some expensive jewelry from me. But, because I did have these roommates, I was already used to sharing my personal space a little bit – and could afford to pay some bills at both places while I was spending most of my time there.

Once we “fully” moved in together and I left my roommates’ place behind, my alone time became a very precious commodity. While I had been living with my roommates, I at least knew I had my room to go to when I needed some “me” time. Now, I was sharing a smaller bedroom, with another person – which was quite an adjustment. I looked forward to going for walks by myself, and even going to work – even though I didn’t particularly care for my job. It was still less than ideal, though, and we bickered a bit more than usual for a while.

Our long-term solution? Surprise – you don’t have to give up your personal space. It’s completely appropriate to spend time apart when you’re in a relationship, even when you live together. Especially when you live together. I’m not talking about sleeping in separate bedrooms (although I have voluntarily slept on the couch a time or two), or keeping a completely separate home (although that’s definitely an option). But, in most cases, it’s completely normal to have a space that’s dedicated as only yours. I have my home office, and when we move again, my girlfriend will have her media cave. If you can afford “extra” rooms, trust me – they don’t have to be guest rooms.

Struggle #2: You love her, but you’re not sure if you’re ready to be that serious.

I’m going to fill you in on a little secret here: Moving in together doesn’t have to mean a big step for your relationship. Just because that’s what it means for most people doesn’t mean that’s what it has to mean for you. In my own personal situation, the scummy roommate who made a pass at my girlfriend happened to be an ex-girlfriend. (We broke up a long time before we became roommates again.) Truthfully, with that girlfriend, we actually moved in together (the first time) before we started dating – but that’s a long and complicated story for another day.

My point here is that, sometimes, moving in together is just moving in together. Whatever reasons you have that would push you to move in together is going to be the motivator once you do live together. This is one of the reasons that moving in with your girlfriend to fix a financial problem is such a bad idea. It lets your finances run your relationship – and this isn’t a fun position for either of you. The strain caused by this type of a relationship shift can be catastrophic.

The other side of the coin is that, if you’re moving in together because you truly love each other… You will become more serious about each other. There’s no set time of “when” it should happen, either. It happens right when it’s supposed to, and when you feel that “click”, it’s magical. You’ll see every part of her, and instead of dreading the things she does that irritate you, it’ll actually make more sense for you to admire the things you love about her. It really is a strange phenomenon.

Struggle #3: You’re not even sure if you actually love her – but she asked you to move in, and you feel guilty saying no.

Truthfully, this is probably the easiest struggle of all. If you’re not sure if you want to move in with your girlfriend, but she expects you to move in together soon, the answer is to not move in together. If your girlfriend can’t accept that you’re not actually ready, and isn’t willing to wait for you to be ready, she doesn’t love you – she just loves the idea of you.

Or, maybe there’s another reason why she’s pushing you so hard. Maybe she doesn’t trust you (solution: break up). Maybe you can’t afford to live separately (solution: find another source of income). Maybe she can’t stand the idea of being alone (solution: get a pet). No matter what the specific issue is, if she’s not willing to wait for you to be ready, she doesn’t love you.

This might sound harsh, but realistically, your girlfriend shouldn’t be pushing you into anything you’re not ready for, and you shouldn’t do it to her, either. Relationships are about compromise… Which occasionally means that you don’t get what you want, in order for your partner to be happy. But if one of you says yes and the other says no, “no” is usually the winning answer – no matter what the question is.

PrevPreviousScience Says, The Longer You’re With Your Girlfriend, The Less Likely You Are To Break Up
Next6 Things You Do The First Day After A Break UpNext