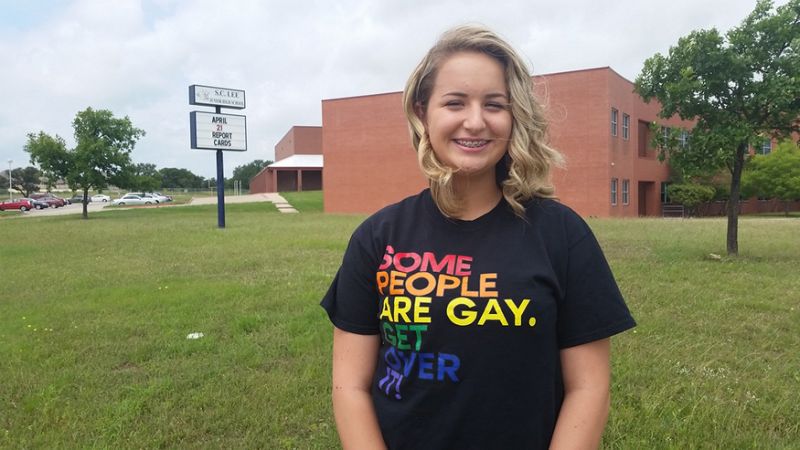 School administrators have sadly reprimanded a 13-year-old student for showing up to school wearing an LGBT-positive T-shirt this week – saying the message is both “distracting” and “disruptive.”

The shirt bore the phrase, “Some people are gay. Get over it!” in rainbow-hued letters, and was worn by Ali Chaney of Copperas Cove, Texas.

However, Chaney was summoned to the office at SC Lee Junior High School, where she said school officials told her she had to change her shirt. Her mother, Cassie Watson, said Ali called her crying because she felt school leaders were discriminating against her for being gay.

However, the school maintains that the shirt violated the dress code, releasing a statement through its Copperas Cove Independent School District that notes,

Our purpose at CCISD is to educate children, first and foremost. According to CCISD’s dress code in the Student Handbook and Code of Conduct, clothing that is disruptive to the learning environment based on reactions by other students is prohibited. The student was offered a school shirt to wear and declined.”

In a conversation outside the school, Sledd claimed multiple students were distracted by the shirt.

But, Ali and her mother do not believe the shirt was disruptive.

It’s just a shirt, and it’s not hurting anybody.”

She added that the dress code is not enforced equally among all students, showing a photo of her friend wearing a shirt that insinuated President Barack Obama was an Islamic Communist. That friend was not asked to change clothes, even though the shirt made a political statement, Ali said.

The district offered a rebuttal, sending its own photo of a third student who wore a Miley Cyrus ‘twerking’ shirt. The district said that student was told to change shirts and complied without incident.

When asked whether district leaders photograph all students who violate the dress code, Sledd did not respond.

Ali’s mother filed a complaint with the district. She said she does not want an apology for what happened, but she does believe her daughter deserves one.