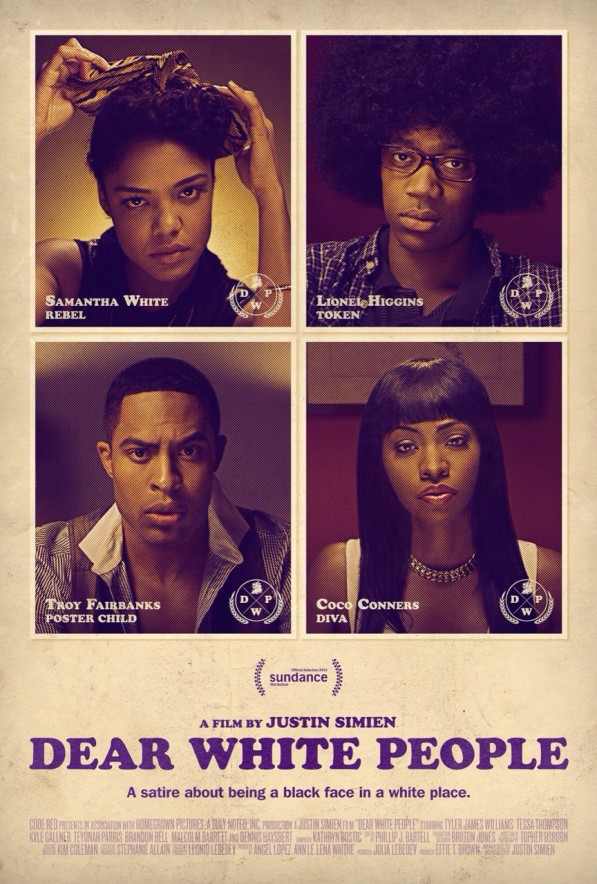 The title may have given this one away but Dear White People, a film from first-time director Justin Simien, serves up a sizzling hot slab of racial commentary and forces the audience to laugh and learn the whole way through.

Centred around four black students at Winchester University, a fictional Ivy League college, riots break out after a group of white students host a ‘black-themed’ party leading biracial film student Samantha White to voice her thoughts on a radio show which she has titled ‘Dear White People’. As Samantha discusses the micro-aggressions that frustrate her such as “Dear White People: Please stop touching my hair. Does this look like a petting zoo to you?” the audience – whether they’re people of colour or not – will recognise things from their day to day but presented in this way (Simien actually provided a ‘white people you have permission to laugh at this film’ disclaimer before screenings) it perhaps hammers home the point that racism, even the casual kind, is never ok.

While the subject matter is serious but the lines are funny, it’s the cast of Dear White People that helps to carry the film, even leading it to win the Breakthrough Talent Award at Sundance earlier this year. Amongst this talent is the slightly known actor Tyler James Williams from Everybody Hates Chris (Williams plays gay reporter Lionel in the film) and Teyonah Parris from Mad Men who plays Coco, both of whom are just two examples of a full cast that really showcases their acting chops.

“Justin Simien is a funny, fresh and current voice with his finger on the Millennials’ pulse. His crowd-pleasing ‘Dear White People’ took Sundance by storm, with its sly and extremely topical satire sparking conversations about our supposed ‘post-racial’, 21st century America.”

Dear White People Concept Trailer from Justin Simien on Vimeo. The racially-themed campus comedy is scheduled for a fall release.