Similar to the Gay-Straight Alliance program found in schools throughout the United States, Australian LGBTI youth programs have fought to enlighten students of all backgrounds and inspire unity of cultures.

After learning of the essential anti-bullying efforts, misinformed parents and conservatives have launched a campaign against the Safe Schools program for fear that might be too influential on the sexual tendencies of Australian youth.

What these parents and conservative citizens don’t understand is the harmful and permanent effects that bullying and misinformation can have on the entire community. Children fear for their lives every day and often resort to self-harm or suicide due to lack of support and compassion.

The Safe Schools program aims to assist youth in healthy expression of their individuality from gender identity, to sexual preference, to overall curiosity.

Many supporters of the “scare” campaign fear that the program is encouraging underage sex and inappropriate behavior among students, but their energy is being focused on the wrong facets of the anti-bullying efforts. 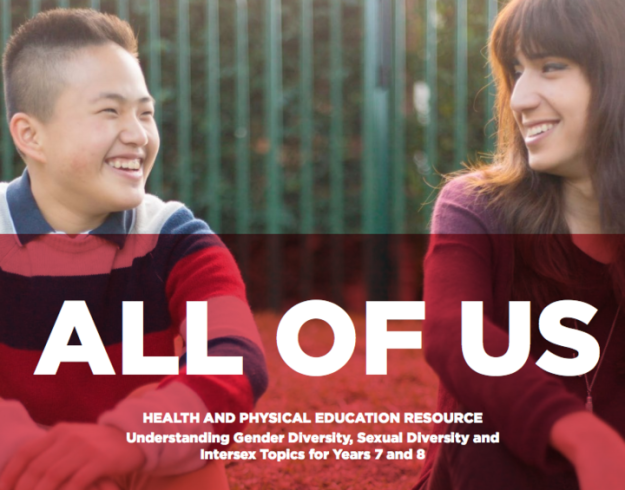 Instead of offering positive reinforcement for authorities behind the program, parents and conservatives are creating a barrier between the protectors of Australian youth, which only further promotes the discrimination that called for the educational program in the first place.

How might concerned parents offer suggestions to the program without compromising the overall nature of LGBTI youth health and safety?

Stonewall is working with a number of celebrities, workplaces, and schools, to tackle abusive language this Anti-Bullying Week by supporting the NoBystanders campaign. The campaign has already been backed by celebrities including Stephen Fry, Nicole Scherzinger, Perez Hilton, Sinitta, Clare Balding and David Walliams.

The campaign comes in response to shocking figures from Stonewall’s research in the UK, where more than 75,000 young people will be bullied this year simply for being gay, and 21,000 of these will attempt suicide. Homophobic bullying and abuse can have a devastating impact on young people’s self-esteem, with one in three gay pupils who experience homophobic bullying changing their plans for future education because of it.

700 Stonewall Diversity Champions – who together  employ more than six million people – have also been sent materials to help them tackle abuse in the workplace.

“This Anti-Bullying Week we’re asking individuals and groups to do their bit to tackle abuse and prejudice that still blights too many lives. More than half of gay pupils experience verbal bullying and one in six experience physical abuse. People can show their support for the campaign by tweeting using #nobystanders and by ordering their free pin badge at nobystanders.org.uk.”

The Hetrick-Martin Institute is a nonprofit organization that serves the needs of LGBT youth.

This touching video was produced by the GLAAD team when they visited New York City and interviewed LGBT young people about being bullied.

They shared their experiences with bullying and how bullying has affected their lives.

Watch the video below and see their personal stories:

Nobody should be bullied for being who they are. You can show your support by going purple. Use #spiritday on all social media.

In the story, Marlene is the self-appointed queen of the playground, the sidewalk, and the school. She is small but mighty . . . intimidating! Known for her cruel ways, the little Queen of Mean has kids cowering in fear-until big Freddy stands up to her and says what everyone has been too fearful to say.

In Seussian rhyme, actress Jane Lynch, clinical psychologist Lara Embry, and former children’s book editor A. E. Mikesell gently and comically depict the undoing of a bully and her efforts to reform. Tricia Tusa’s charming illustrations make the story an even more accessible conversation starter for all ages.

By the end of 2014, it is projected that Care With Pride™ will have raised more than $500K for our LGBT charitable partners since the program’s inception in 2012.

Now in its third year, Care With Pride™ is a multi-faceted campaign developed by Johnson & Johnson’s, which was established to raise awareness about the negative impact of bullying on the overall health and well-being of our youth, with particular emphasis on cultivating respect and equality for the LGBT community and LGBT families.

Since 2012, donations raised through Care With Pride™ have supported PFLAG’s anti-bullying efforts and this year, The Trevor Project and Family Equality Council are newly added beneficiaries.

The theme for this year’s program is ‘Caring for All Families’ and emphasises cultivating respect and equality for the LGBT community, specifically in school systems.  Bullying, in particular, is a common concern for most families. The unfortunate reality is that nearly one in 3 students report being bullied during the school year. For LGBT students, it’s even worse.  Eight out of 10 LGBT students report having been verbally harassed at school, while four out of 10 have been physically harassed at school.  Students who experience bullying are at increased risk for depression, anxiety, sleep difficulties, and poor school adjustment. And most alarming, LGB youth are four times more likely, and questioning youth are three times more likely, to attempt suicide as their straight peers.

Our commitment together is to raise awareness about the negative impact that bullying has on the overall health and well being of young people. We have had great success with the CARE WITH PRIDE™ initiative over the past two years and have built significant momentum in a short period of time. Last year alone, we helped reach more than 100,000 students and faculty with a message of inclusion and acceptance.”

Alex Gorsky, CEO and Chairman of the Board of Directors for Johnson & Johnson

Central to this year’s program is the Safe School Action Pack, a booklet containing top ways to make schools safe for all students. Booklets contain approximately $55 in savings from more than 20 Johnson & Johnson brands.  For every coupon redeemed, Johnson & Johnson will make a donation to our LGBT partners and will guarantee a total minimum of $215,000. The booklets will be distributed at more than 100 LGBT events across the country and can be downloaded at www.CareWithPride.com.

In addition to redeeming coupons, consumers can also support Care With Pride™ by uploading a photo through Johnson & Johnson’s Donate a Photo* app. Individuals can select PFLAG and Family Equality Council as their cause to donate to within the app.  One dollar for every photo shared will go to the selected Care With Pride™ charitable partner.  Individuals can donate one photo a day, every day. Money raised through the Donate a Photo app for our LGBT charitable partners will be in addition to the $215,000 in donations already pledged as part of CARE WITH PRIDE™ campaign for this year.