The past couple of years have brought to light heated debates about countless issues connected to the rights and laws concerning the members of the LGBTQ+ community in America. One of the most controversial debates has been about the bills that were introduced in several states, demanding that people in public buildings, schools etc. do not use the bathroom that corresponds to their gender identity, but the bathroom that apparently corresponds to the “sex on their birth certificate”, otherwise they may be charged with fines.

The fact that such an issue as where people are or aren’t supposed to pee is up for debate is absolutely outrageous – and is deemed as such by a considerable part of the population in most states. At the same time, conservative voices have gained ground with claims that mostly have to do with the pathologization of trans identities (especially in childhood) and the so-called protection of women from assault – which is quite ironic coming from the conservative part of a nation that has elected a man with several accusations of assault as president.

The fears based on which these bills are justified, are produced by harmful misconceptions that have nothing to do with reality. The thing is that if such bills pass, the situation becomes even more dangerous than it already is for trans individuals, both adults and children. In fact, trans people are much more likely to be concerned for their safety when visiting a public bathroom than cis women and children, for whom to republican worry is articulated.

Lt. Gov. Dan Patrick who spoke at the Republican Party of Texas State Convention on the 12th of May last year, in Dallas, is in favour of passing a bathroom bill in the style of North Carolina and claims that there is no danger for the economy of Texas, even though the economic consequences in the case of North Carolina were visible: last year, when the bathroom bill was passed, the state lost about $400 million in a span of six months due to legal fees, events that were cancelled, and a damage in tourism.

A study held out by the Texas Association of Business showed that Texas could lose about $8.5 billion a year in boycotts and companies that would change their mind about setting up there business there.

Dan Patrick didn’t worry about such consequences since he considered the bill a priority, holding transphobic views that he tried to cover up with saying that this should not be a problem for “certified” trans people, since they will be able to go to the correct bathroom anyway if they have their documents changed, and with claiming that this bill differed to North Carolina’s in which it wasn’t indicated specifically that alignment with the “original” birth certificate and the bathroom was required.

However, according to Mara Keisling, head of the National Center for Transgender Equality, the Texas bathroom bill is just as bad as the North Carolina one. Keisling points out that the North Carolina doesn’t distinguish between original and current birth certificates.

A survey held out by her group in 2015 showed that only 9% of trans people could eventually change the sex on their birth certificates, due to bureaucratic and financial reasons, so even with those standards the results remain harmful. In addition, the Texas bill allows the state attorney general to carry investigations in individual school districts and collect civil penalties in order to enforce the discriminatory law.

State Rep. Celia Israel (D-Austin), an openly lesbian Latina Democrat, said in an interview on SiriusXM Progress that she’ll stand against the bill which she expected to be introduced, and is actually pleased that it is moving early so that they can “let the games begin”. Israel says that the mainstream business communities in Texas have already started preparing to oppose themselves vocally to the bill. She points to the aforementioned study to draw attention to the consequences the bill will have for the economy of the state. 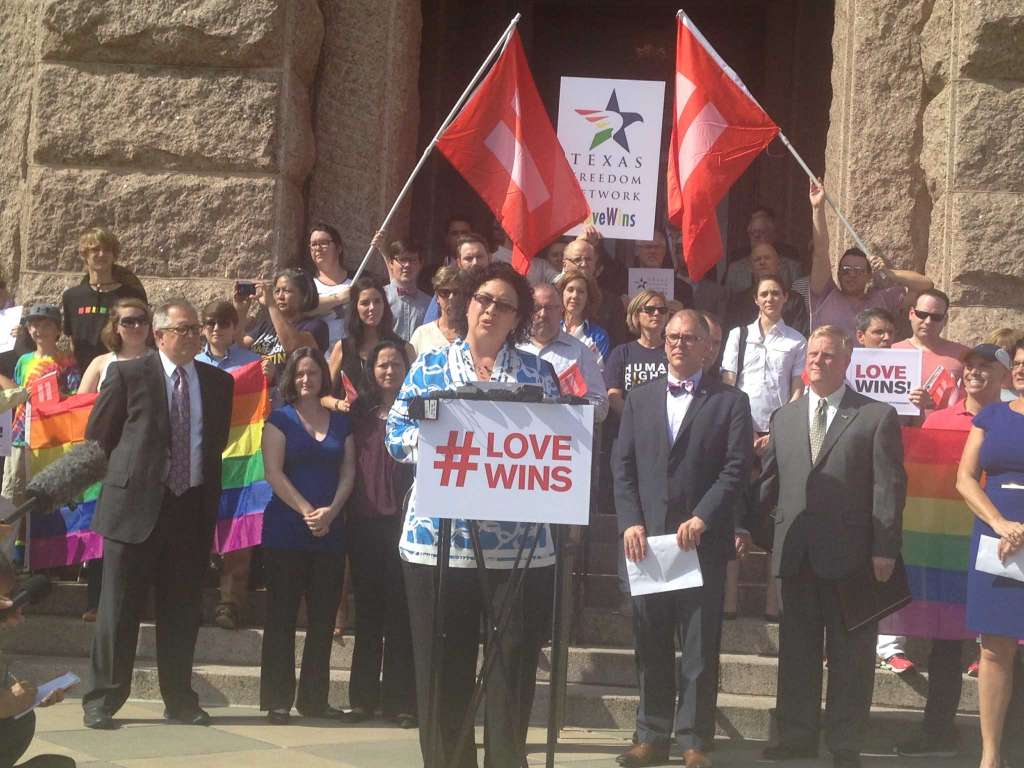 This is a good report that was done by a very recognized research group, university-affiliated. There will be hearings in the senate and they will hear loud and strong from the business community. My district includes such businesses as Dell, Samsung, Apple. The business community is to be commended. But I’m also going to be challenging them to come out as individual companies to say to my colleagues for whom their business is in their district, ‘This is not Texas and this is certainly not a priority.’”

She points out that famous music festivals like Austin City Limits and SXSW will be negatively affected by a tourism boycott that will probably take place if the bill passes.

In Fort Worth and Dripping Springs, south of Houston, there are districts which have given accommodation to trans youth. Israel explains:

There’s an overwhelming majority of parents, when they are presented with these scare tactics, who will stand up for that transgender child and his or her family, and say, ‘Let’s just let this kid be a kid.’ So we have good things to say in Texas about Texans being respectful and courteous. This bill would of course stir things up at the local level. We’ll see a lot of local leaders saying, ‘Please let us do what we do best. We know our schools. We know our districts.’”

Israel said, concerning the impact such a bill will have on the state’s economy.

We know that people have choices in where they’re going to spend their money. Any state in the union should have learned from North Carolina. Texas did not. And although I’m disappointed, I’m not shocked. And I’m ready to continue to fight for the state that I love.”