While positive attitudes toward lesbians and gay men have increased, a new study – led by researchers at IU’s Center for Sexual Health Promotion – shows attitudes toward bisexual men and women are relatively neutral, if not ambivalent.

The study, which is only the second to explore attitudes toward bisexual men and women, was led by Brian Dodge, associate professor in the Department of Applied Health Science and associate director of the Center for Sexual Health Promotion at Indiana University’s School of Public Health-Bloomingtom.

While recent data demonstrates dramatic shifts in attitude (from negative to positive) toward homosexuality, gay/lesbian individuals and same-sex marriage in the U.S., most of these surveys do not ask about attitudes toward bisexuality or bisexual individuals. And many rely on convenience sampling strategies that are not representative of the general population of the U.S.”

The study looked at five negative connotations, found in previous studies, associated with bisexual men and women, including the idea that they are confused or in transition regarding their sexual orientation, that they are hypersexual and that they are vectors of sexually transmitted diseases.

The research showed that a majority of male and female respondents, more than one-third, were most likely to “neither agree nor disagree” with the attitudinal statements. In regard to bisexual men and women having the capability to be faithful in a relationship, nearly 40% neither agreed nor disagreed.

Those who identified as “other” had the most positive attitudes toward bisexuality, followed by gay/lesbian respondents and then heterosexuals.

Bisexual men and women face a disproportionate rate of physical, mental and other health disparities in comparison to monosexuals—those who identify as exclusively heterosexual and exclusively homosexual, Dodge said. Although research has not determined the cause, Dodge said that negative attitudes and stigma associated with bisexuality could play a role.

Dodge said he hopes the results emphasize the need for efforts to decrease negative stereotypes and increase acceptance of bisexual individuals as a component of broader initiatives aimed at tolerance of sexual and gender minority individuals.

After documenting the absence of positive attitudes toward bisexual men and women in the general U.S. population, we encourage future research, intervention and practice opportunities focused on assessing, understanding and eliminating biphobia—for example, among clinicians and other service providers—and determining how health disparities among bisexual men and women can be alleviated.”

What is it that makes some lesbians so reluctant to date bi girls?

Lynette & Corey, an engaged couple of four years, open up about their relationships and discuss the real struggles, and insecurities surrounding sexuality.

Corey, who is straight, finds it tough to imagine he is enough for Lynette, who is bisexual and has dated both men and women. 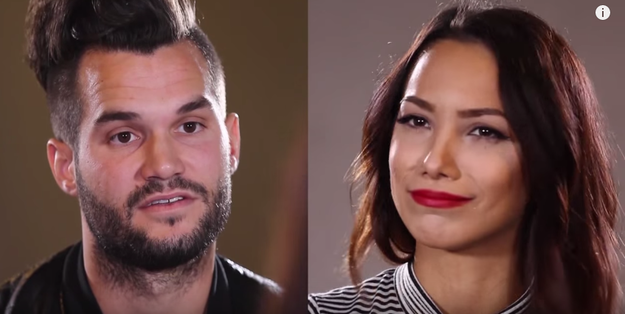 Their relationship has been both on and off, and during the off periods he was worried that she was using that time to date women and get with her ex-girlfriends.

What is interesting though, is he is not threatened by her dating other men, but if she still wants to see other women.

Even though Lynette says it ‘really isn’t an issue’, Corey still doesn’t understand.

He wants to know if women were still a factor, because “it’s still present one way or the other.” In order to truly trust her, he wanted her to come clean about everything.

Lynette responded by saying sexuality can be fluid, and it’s not always black-and-white.

It’s a part of her life, and something she never wants to get in the way of her relationship with Corey.

In my experience and I feel like several other people’s experiences, sexuality can be very fluid. There have been several instances where I’ve been attracted to this person. It’s caused me not only a lot of really fucked up hurt and stuff like that, because it’s so confusing.

I knew immediately when I met you that I choose this person. I didn’t know, a long time ago I thought I might end up with a woman. I was open to that a long time ago. But now after meeting you, I knew that wasn’t an issue anymore.

The video is for The Skin Deep, a series of couples asking deep and honest questions in an effort to learn more about modern relationships.

So, it would appear that bisexuality is still confusing the hell out of everyone, especially when you’re a bi-women seeing a man.

And it’s frustrating. And it makes you feel like all the identity you’ve worked so hard to own and embrace is getting squished.

It seems people still just don’t get bisexuality. And because of the confusion, bisexual people are forced to struggle with annoying situations.

1. Everyone assumes you’re “Straight Again” — Which would be fine, if “everyone” didn’t also include the people you’ve already come out to.

2. You get comments such as “I always knew you’d choose men…”

3. People ask if you’ve “Told them [your partner]” of your sexuality.

4. Assumptions, that you suddenly have heterosexual privilege.

5. Constantly being asked “But which do you like MORE; men or women?”

6. People assume your last same-sex relationship was just a phase.

7. People assume that you’ll be willing to cheat on your partner.

8. People asking how many threesomes you’ve had, before winking at you partner and trying to high-five them.

9. Realising your partner is more threatened by your old boyfriends than your old girlfriends.

10. Hearing the words “But I thought you were gay?” even though you’ve explained countless times you’re bi.

11. You feel completely erased from the LGBT spectrum (at least in lesbian communities eyes).

The campaign features bi people telling their stories of coming out and finding love regardless of the gender of the person they find it with.

Here’s the first, from a very talented musician out of Brooklyn.and to kick it off this import week a series of amazing videos have been release by the excellent viral campaign #StillBisexual.

Also read: Evan Rachel Wood Has An Important Message About Her Bisexuality: ‘We Do Exist’

#StillBisexual is a new viral campaign aimed at fighting the myth that bisexuals don’t stay bisexual.

A common question bisexuals people are asked regularly is “So, are you still bisexual?”, which is one of the most infuriating questions asked. So to combat this frustration people are telling their stories through video blogs and explain why, single or in a relationship, regardless of their partner’s gender, their bisexual identity doesn’t change.

You’ve probably heard a lot of stereotypes about bisexuality – the bastard stepchild of sexual orientations. Its something a lot gay and straight people struggle to figure out.

Most people can’t even agree on a definition of bisexuality, which has led to a lot of confusion, angst and prejudices.

No one is really bisexual. It’s just a phase. They’re either gay and they can’t admit it, or they’re straight and they’re just experimenting. So, why can’t they make up their minds? Because you know, bisexuals can’t be trusted. They’ll just leave you for a man/woman.

They can’t be monogamous. They can’t be happy unless they’re sleeping with a man and a woman at the same time – bisexuals don’t have real relationships. They’re fun for a roll in the hay though.

Bisexual women are sleeping with the enemy. They are stealing lesbian energy and giving it to men. They just want heterosexual privilege. It’s easy to be bisexual because it’s chic.”

We’ve heard it all… so let bust that myth bubble once and for all.