Is Grey’s Anatomy Callie getting back in the dating game? In a new episode of Grey’s Anatomy, Callie (played by Sara Ramirez) will encourage colleague Owen (Kevin McKidd) to start dating again.

However, when she tries to set him up with a tech rep (Amy Motta), she is shocked to discover the rep is actually interested in her.

Back in October, there was a gut punch for fans when the couple decided it was time to end their marriage together.

“When a couple breaks up, I always ask: Where does the love go? It’s not like you don’t still love the person; the love just doesn’t disappear. But you can’t love the person. It’s really great watching them try to figure out how to be friends, how to love each other as friends and co-parents, and how to support each other when the other person needs it without it being weird or without it being too much.” 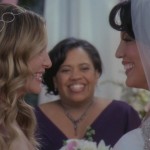 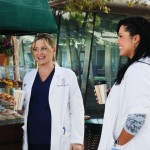 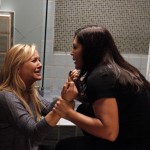 The second half of season 11 will see Callie and Arizona learning how to best interact with each other as friends and as parents to their daughter — as well as dating new people.

“We reach a place where there is an exploration of them dating and getting back out there into the world. I didn’t want to rush it. I didn’t want to throw them at other people because I feel the same as with Owen (Kevin McKidd) — you have to be respectful of the relationship they had. We do it slowly and interestingly, and then we’re going to take our little steps. But it’s been really fun to put them out there and find people that they’re intrigued by.”

While it’s unclear if the out and proud bisexual Callie will date a man or a woman, Rhimes says she and star Ramirez have had a lot of conversations about the discrimination that the bisexual community often faces.

“I’ve read a lot about that concept that bisexuality has not had a lot of support. One of my favorite things that we did in the Callie and Arizona episode is Callie announcing that she’s bisexual, which by the way, I think nobody has ever done that on television, like ‘I’m bisexual,’ which I think is crazy.

I love that she’s determinedly bisexual. She’s not somebody who is straight who discovers she’s a lesbian; she’s bisexual and feels very strongly about that. That’s been interesting for us to navigate — and the character sticks to it. Arizona was always a little dismissive of that. In the early days of their relationship, the fight they always had was, ‘You’re taking a tour through being a lesbian and you’re going to go back to men.’ ”

While reconciliation doesn’t appear to be in the immediate cards, Rhimes still has high hopes for Callie and Arizona winding up together.

“I’m always rooting for Arizona and Callie to be together. For me, I think they’re the perfect couple, but that’s not to say they’re going to be together. For me, they’re the perfect couple. It would make me very sad if they were apart. That doesn’t mean that they’re going to be able to work out their problems and get it together in time, for when ever the show is going to end. But I hope so. If they can, I think it would be amazing. But until they do, there’s other people to explore.”

As for Arizona, she’ll be throwing herself into work and focusing on curing Dr. Herman (Geena Davis) in what Rhimes calls a “really powerful, amazing and beautiful story” between the two characters.

“What’s super cool about that is after that huge, momentous occasion, for the next six episodes — which are the only ones I know — we have not focused on Arizona and Callie in their romantic aftermath. We’ve gotten to let the characters be separate but equal, and follow them in the other part of their life — at work — and explore their passions, sense of humor and friendships.”