The real life Alex Vause has described Orange Is the New Black relationships as “total fiction” in a new interview.

Cleary Wolters, on who the Vause character is based, says in this preview of a Security Brief interview that the show made prison look “like a lesbian bed-and-breakfast”.

If that’s really the way prison were, I probably would’ve stayed.” 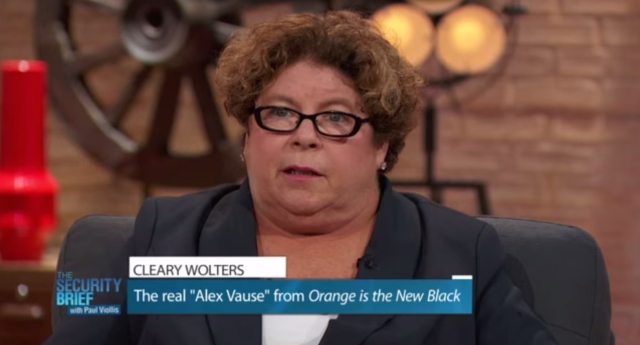 The hit Netflix series – as if you didn’t know – is based on Piper Kerman’s account of her stay in a women’s prison for money laundering and drug trafficking charges. Charges brought about by Wolters (her one lover) naming her.

Wolters has been a critic of the show and Kerman’s interpretation before. However, given that show now has millions of adoring OITNB fans, she may want to hold off on exposing the accuracy of the relationships we’ve laughed, cried and very much blushed over these past few years.

The full interview is yet to be aired, and hopefully Wolters will clear things up for us and maybe even reveal some secrets as to what’s left to come in the story.

Watch the clip of Wolters below:

We have to admit that we’re totally fans of Netflix’s Orange Is the New Black and have been completely swept away in the personal lives of Piper, Alex and the other Litchfield Correctional inmates.

However, sadly the truth is the real-life Piper’s prison stay and romance with her real-life ex-girlfriend, is far from as seen on TV.

In fact, the original Alex Vause — 50-something former felon Cleary Wolters — tells HuffPost Live that her romance with Piper Kerman (Taylor Schilling‘s character Piper Chapman on the series) was far too brief to be noteworthy – kill joy.

I’m flattered that they picked out me in her life as such an interesting, charismatic character that they had to make a whole backstory about me. I never imagined I’d be Donna from That 70s Show. When I watch that part of the series, I watch it as a viewer. I don’t say ‘that’s my life.'”

Other differences between OITNB and real prison life? There’s much less sex — at least out in the open.

Also read: ‘Orange Is the New Black’ Gets Season 4 Renewal From Netflix, And We Get Another Sneak Peak of the Next Season

There is sex occurring, but it’s not happening in the showers without a shower curtain. if you get caught having sex, you go to . . . solitary confinement. I never saw it. In fact, I might have stayed had that been the case. There’d be a line to get into prison if it were as fun as Orange Is the New Black shows it to be.”

Cleary Wolters aka the real-life Alex Vause of ‘Orange is the New Black’ has a deal with HarperOne for the memoir ‘Out of Orange’.

In a statement, the publisher said that Wolters’ book would tell of her time in prison and her ‘complicated’ relationship with Piper Kerman (or as we know her Piper Chapman).

Kerman’s ‘Orange is the New Black’ was a best-selling prison memoir adapted into the TV series for Netflix.

Wolters said in a statement that her life was “an unbelievable saga” with a surprising new chapter.

On the Netflix show, Vause is played by Laura Prepon. Taylor Schilling stars as Piper Chapman, the stand-in for Kerman.