So you know that Black Mirror episode set in the ’80s? Well, here it is with Poussey (Samira Wiley) and Taystee (Danielle Brooks) from Orange Is The New Black.

(Spoilers for Orange is the New Black Season 4 below!)

At the end of the last season, Poussey was dramatically killed, sparking a riot inside the prison.

But in the clip Taystee dreams of seeing her one more time in Black Mirror’s virtual afterlife, San Junipero.

The pair reconcile and dance, but a few moments later Taystee is sent back to the land of the living – waking inside the prison.

Although we’re struggling to accept that this is the last time we’ll ever see Poussey back with a Litchfield inmate, we’re still excited to see how the prison has changed following her tragic death.

Season 5 promises to be an explosive one, with the show left on on a cliffhanger as the pregnant Daya points a gun at prison officer Humphrey – and a gunshot is heard.

The Netflix show will be back on our laptop and TV screens on June 9, picking up exactly where it left off.

The Human Rights Campaign awarded openly Orange is the New Black actress Samira Wiley with its Visibility Award last weekend during HRC’s 2015 North Carolina Gala. Known for her role as inmate Poussey Washington, Wiley reflected on her public image and coming out experience at the gala.

“I believe that being visible truly is a huge part of the battle. Some days it isn’t about moving mountains, but rather about waking up every day and choosing to live my truth as authentically as I am able. It is about holding my girlfriend’s hand when I walk down the street. It’s about doing something as small as posting a picture on Instagram that might teach a queer teenage girl in a small town that she’s going to have a beautiful life too. That it’s possible, that anything is possible. It’s about emanating pride and love rather than shame, and hate.”

More: Samira Wiley Discusses ‘Orange is the New Black’ Season 3 And Coming Out To Family

Samira Wiley made her way into our lives playing inmate Poussey Washington, the moral compass among the inmates of Orange is the New Black.

In a recent interview with Fox she touched base on Season 3 of Orange is the New Black, kissing co-star Danielle Brooks, and coming out to her parents.

Wiley can also be seen playing Agent Annie Bell in ‘Rob the Mob’. The film is an American crime drama directed by Raymond De Felitta. She was seen in the films ‘Being Flynn’ and ‘The Sitter’.

So, would you want to walk down the aisle with Crazy Eyes or make sure she stays behind bars? Or would you be like Yael Stone, who plays Lorna Morello, and date yourself?

The second season of Orange Is The New Black won’t be on Netflix until Friday, June 6, but these just-released production stills give nice taster of things to come.

So what can we look forward to; tense moments between Larry (Jason Biggs) and Piper (Taylor Schilling); dance parties, featuring Crazy Eyes (Uzo Aduba) and Taystee (Danielle Brooks). And shift glancing with Nicky (Natasha Lyonne) and Red (Kate Mulgrew) look disturbed about something 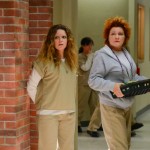 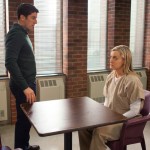 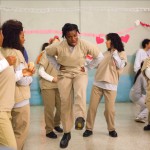 For more insight into Orange is the New Black second season, here is 15-second teaser, released last month, might help a little too.

Orange Is The New Black returns with all new episodes exclusively on Netflix, June 6, 2014.