Have you ever wondered if the prejudices you have are… Well, smart? A recent study has shown that your intelligence doesn’t really affect how much hatred you have for others.

Previous studies found that people “of lower cognitive ability” were more likely to be prejudiced.

In the interest of getting rid of the stigma that hatred is inherently stupid, social psychologists Mark Brandt and Jarret Crawford examined another side of things. What they found was that smart people hate, too – but they’re hating on completely different people.

Okay, maybe we should start with a little background information. Brandt and Crawford’s study took 5,914 subjects and tested their IQ using a wordsum test. This test is considered pretty accurate, although no IQ test is completely accurate. Cognitive ability is pretty hard to pinpoint, after all.

After they had given the wordsum tests, they started asking about the prejudices of each person. They didn’t mention whether they felt the prejudices were “justified” or not, just whether the subject was prejudiced against that particular group or not.

What did change, from previous studies, was the connection to the types of hatred the people felt.

Brandt and Crawford’s study found that people who scored lower on the wordsum test were more likely to express hatred toward low-choice groups. By definition, low-choice group means that members of that group have less choice over being in that group. This would include categories such as race, gender, and sexual orientation. There was also a stronger hatred of people with non-traditional views.

Those with cognitive ability weren’t found to be more prone to hatred, but they did show a stronger hatred toward people in high-choice groups. By definition, high-choice means groups that are seen to be able to change their classification. This would include categories such as weight, political beliefs, education, and wealth/poverty. They expressed just as much hatred as those in the lower-IQ group, but in a much different way.

Those with higher cognitive ability may find it easier to express their prejudices in a way that removes the feeling of bias. They’re able to back their beliefs and hatreds up with “facts” and study-supported opinions, but that doesn’t necessarily mean that their hatred is any more justified.

Why do we hate people who are different than us?

People dislike people who are different from them. Derogating people with different worldviews can help people maintain the validity of their own worldview.”

– Brandt and Crawford, in an interview with Broadly Vice

Basically, if you see the world in one certain way, you’re going to reject anything that challenges that worldview. It’s certainly not universal – there were outliers in this study, just like any other – but humans are stubborn. We don’t like to think any harder than we have to. It’s easier to hate someone we don’t understand, no matter what the reason for the misunderstanding. Some people can overcome this instinct, but just because someone can’t, doesn’t necessarily mean they’re dumb. It’s coded into our human nature.

People who ranked as having lower cognitive ability may be more likely to essentialize people – limiting them to a very specific category. They see people who are different from them being their polar opposite, because the subtleties and complexities aren’t so easily apparent. This can be dangerous, but – again – it’s human nature.

It makes sense, then, that they’d want to distance themselves from these distances as much as possible. Seeing “the enemy” or “the threat” as something that’s so different makes it easier to depersonalize their feelings. It helps to remove themselves from the line of fire, so to speak. The more out-of-sight it is, the easier it is to deal with.

To learn more about this study, please check out this whitepaper on the subject.

Answer to the Web Acronym IQ Test from WPromote 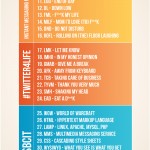 Well mine is below average, but please feel free to test your own. This quiz put together WPromote will test your web acronym IQ. In the graphic above and see how far you can get before stopping to check the Answer key. We guarantee you’ll have learned a few new netspeak terms by EOD.

If you can make it all the way to the bottom without searching a term, then I salute you. 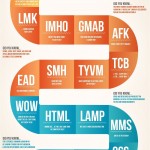