Lena Dunham’s sister Grace is opening up about a personal battle with body image, self-acceptance and gender identity.

The 24-year-old writer is one of the nine people who appear in Fullscreen’s special season of StyleLikeU docu-series – The What’s Underneath Project.

For the project subjects get real about their own insecurities and how they found comfort in their own skin while simultaneously (and symbolically) removing layers of their clothes.

For Grace – who originally came out as a lesbian at the age of 17 – the struggle is about understanding which gender to identify with – if any.

I think at this phase in my life, there’s a particular weight on gender and trying to adequately communicate [that] I’m not a woman, but I’m not a man. 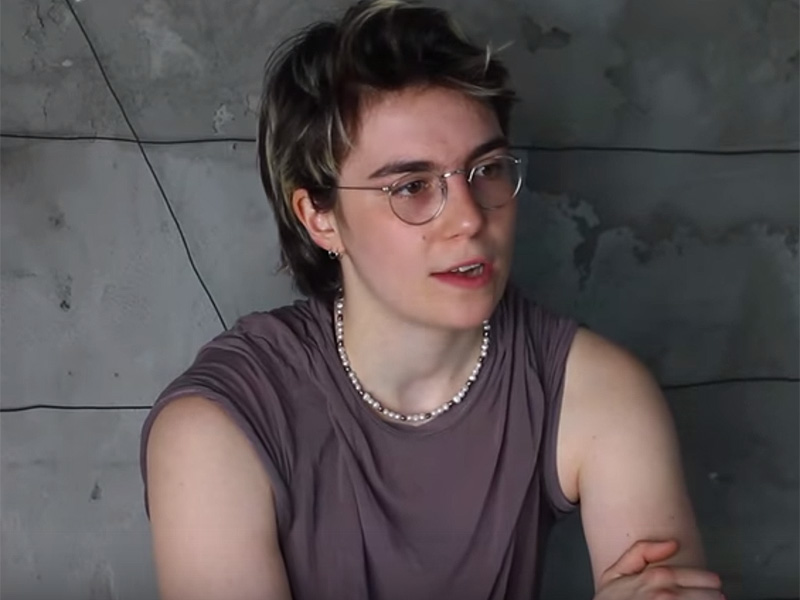 Grace was inspired to go down the path that defies categorization by friend and trans-activist Reina Gossett – who opened Grace up to the possibilities after struggling to fit into the box of perfect femme lesbian.

I think I was really confused. I was like – but I am having sex with women? I’m out. Everyone knows I’m a lesbian. What is this feeling I am having? Why am I still feeling a lot of shame? Why do I still hate my body?” 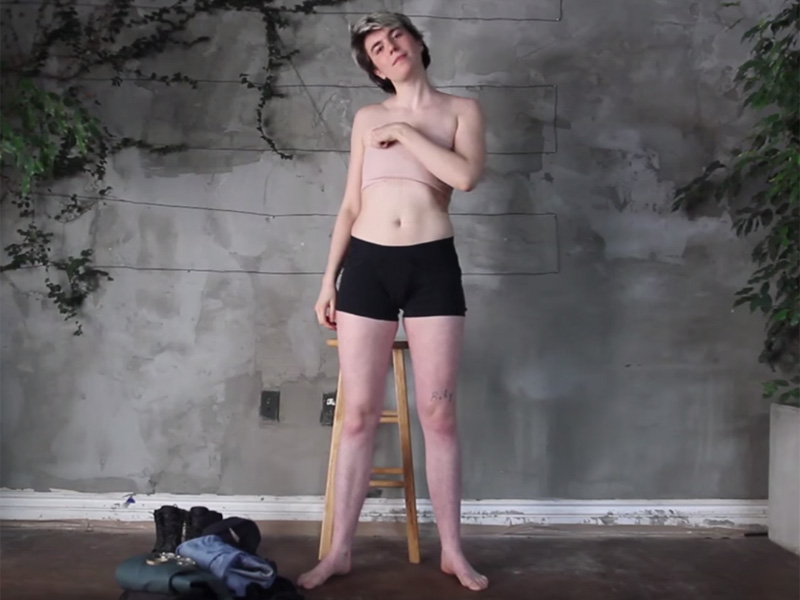 Grace now understands that there are more than two gender identities to choose from – and embracing the unknown is powerful enough.

Maybe just accepting I don’t have a name for myself and accepting that uncertainty is a more accurate reflection and a more freeing reflection of who I want to be then trying to figure out which box is best. I think self acceptance and self love is a process that might not ever come to an end. My body – like, it’s mine. It’s me. It’s who I am.” 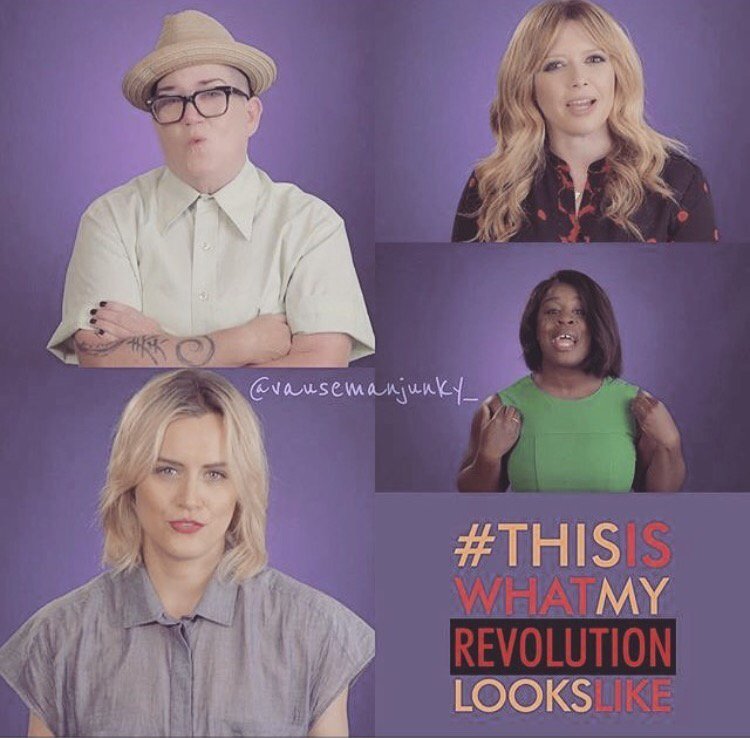 The video never mentions the presumptive Democratic presidential nominee by name, but talks about the importance of voting and having the government more closely resemble the gender breakdown of America.

The actors, poets and artists describe what their revolution looks like, emphasizing equal pay, paid family leave, protecting the right to choose and having more women in leadership roles. “Join our revolution,” implores Aduba.

In a statement, the video creator and  co-founder Humanity for Hillary, Laura Dawn explained

As a 13-year veteran and passionate member of the progressive movement, I was aghast to see decades-old false attacks on Hillary Clinton echoed by young progressives. I researched every single attack on the former Secretary and emerged more confident than ever that she absolutely deserves to be the first woman president of this country. I believe that Hillary Clinton will be a fantastic president, and electing her is a paradigm shifting act that will foster new levels of women running for office and winning.”

I participated in this video because this is the most essential election of our lifetime, and I believe that electing more women is a true revolutionary action. If you believe in equality for women, LGTBQ, people of color and immigrants then there is only one choice this November — Hillary Clinton.”

There’s nothing quite like watching an empowered woman walk onto a stage, flip caution the bird and spout a hilarious one-liner about sex.

Here are our favourite bits of advice dished out…

1. Ellen DeGeneres – “Find that person that gets you, wants to take care of you, wants the best for you.”

2. Margaret Cho – “Find out how to share that desire with a partner.”

7. Amy Poehler – “Vulnerability is the key to happiness.”

When Lena Dunham received an award at Variety’s Women in Power luncheon on Friday, she spoke up about her own sexual assault and why she’s been motivated to help other victims.

Dunham was being honoured for her work with GEMS, an organisation that works to empower girls who fell into human trafficking. The HBO actress is now using her personal experience – and voice as a celebrity – to help others.

When I was raped, I felt powerless. I felt my value had been determined by someone else. Someone who sent me the message that my body was not my own, and my choices were meaningless. It took years to recognize my personal worth was not tied to my assault; the voices telling me I deserved this were phantoms, they were liars. So as a feminist and a sexual assault survivor, my ultimate goal is to use my experience, my platform, and yes, my privilege, to reverse stigma and give voice to other survivors.”

Dunham also spoke of the stigma surrounding human trafficking victims and how there needs to be a shift in awareness and education.

Despite this clear lack of agency, we as a society somehow think that 14-year-old runaways make a choice to be in the commercial sex industry. We call these girls names and judge them and write pop songs celebrating their assailants and their fancy sneakers. We think that locking them up will help them make better choices. We look at youth in the commercial sex industry in America as willing participants in their own victimisation, ignoring the disenfranchisement that comes with being poor, from being a child, from being a girl of color, from being a homeless LGBT youth, from being a kid in foster care.

We ignore what it must be like to be bought and sold by adult men and to spend your adolescence that this is what you’re worth, that your voice doesn’t matter, that you have no power.”

The Girls creator and star wrote about her sexual assault at Oberlin College in a controversial passage in her memoir, Not That Kind of Girl. She called her assailant Barry, but when reporters tracked down a real-life Oberlin alum with that name, the publisher announced new editions would clarify that “Barry” was a fake name and offered to pay the man’s legal fees.

The Brooklyn-born and New Jersey-raised, hit-maker singer / song-writer, topped the charts in 1963 at age 16 with her epic song of teenage angst, It’s My Party, and followed it up with the hits Judy’s Turn to Cry, and the epic anthem You Don’t Own Me.

Her other hits include She’s A Fool, Sunshine, Lollipops and Rainbows, That’s the Way Boys Are and Maybe I Know.

Gore was discovered by Quincy Jones as a teenager and signed to Mercury Records. She graduated from Sarah Lawrence College with a degree in English/American literature.

She officially came out to the public when she hosted several episodes of the PBS series, In The Life, which dealt with gay and lesbian issues.

During the 2012 presidential campaign, Gore turned You Don’t Own Me into an online video public service announcement demanding reproductive rights which starred Lena Dunham and Tavi Gevinson, among others.

In the last few years, she performed at Feinstein’s at the Loews Regency in New York and, along with Ronnie Spector and LaLa Brooks, headlined the She’s Got the Power concert outdoors at Lincoln Center in 2012.

In addition to Sasson, Gore is survived by her brother and mother, Ronny. Services will be held on Thursday at the Frank E. Campbell funeral home on Madison Avenue.

Amongst the same-sex marriage supporters’ camp is Lena Dunham, who, despite having offended plenty of people on the topics of race and class, she actually has a solid viewpoint on the topic of marriage equality.

Speaking in a radio interview with Howard Stern, the creator of the TV show Girls explained that,

“We’re not against marriage, but I want to wait until it’s something — my sister’s gay and it just doesn’t feel good to me to do something she can’t do. She can do it in some places but not all places”

Dunham has been hit with several rumours that her and boyfriend Jack Antonoff (of the band fun.) are engaged after she was spotted wearing a diamond ring on her hand last year, but apparently, this is not the case. She explains that until all 50 states in the United States of America have marriage equality, it’s just not in her future.

The position is perhaps a good one – at least one that raises awareness (‘how would you feel if the law said you couldn’t get married to the person you love?’) – but many would argue that actively campaigning for marriage equality would be a more effective strategy.

Furthermore, actors Angelina Jolie and Brad Pitt once stated that they wouldn’t get married until marriage equality was a reality everywhere either. Some years later in 2014 and the two have changed their mind, having gotten married over the summer. So whether Lena Dunham sticks to her statement or not is yet to be seen, but with the recent Supreme Court rulings 30 states in the USA now have marriage equality so she may not have to wait too long to keep her promise.