Talking to PEOPLE in this week’s cover story, Ellen DeGeneres admits that her life has been blessed by any standards. 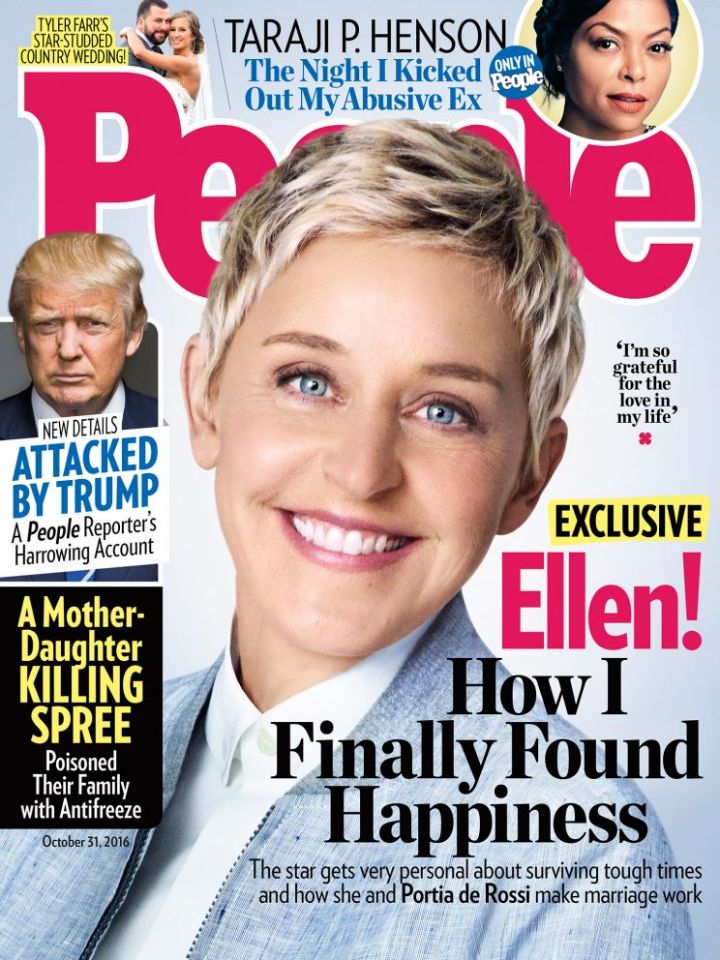 DeGeneres, who tied the knot with Portia de Rossi in 2008, insists she has learned to never take their relationship for granted.

Portia and I constantly say to each other, ‘We are so lucky.’ Sometimes it’s lying in bed at night before I go to sleep, and I just say thank you to whatever, whoever is out there. I’ve gotten to a place where I really am just settled. Really. I know that I’m not going anywhere. She’s not going anywhere. I’m not saying the relationship took a while; I’m saying in my life, it took a while to find this.”

When it comes to love, DeGeneres adds.

You get what you give. I think you can’t expect someone to treat you a certain way. Whatever it is, if you’re getting a lot of negative energy or anger, you have to say, ‘Why am I getting this? Am I doing something to create it?’ And if the answer is honestly no, then get out of that situation.” 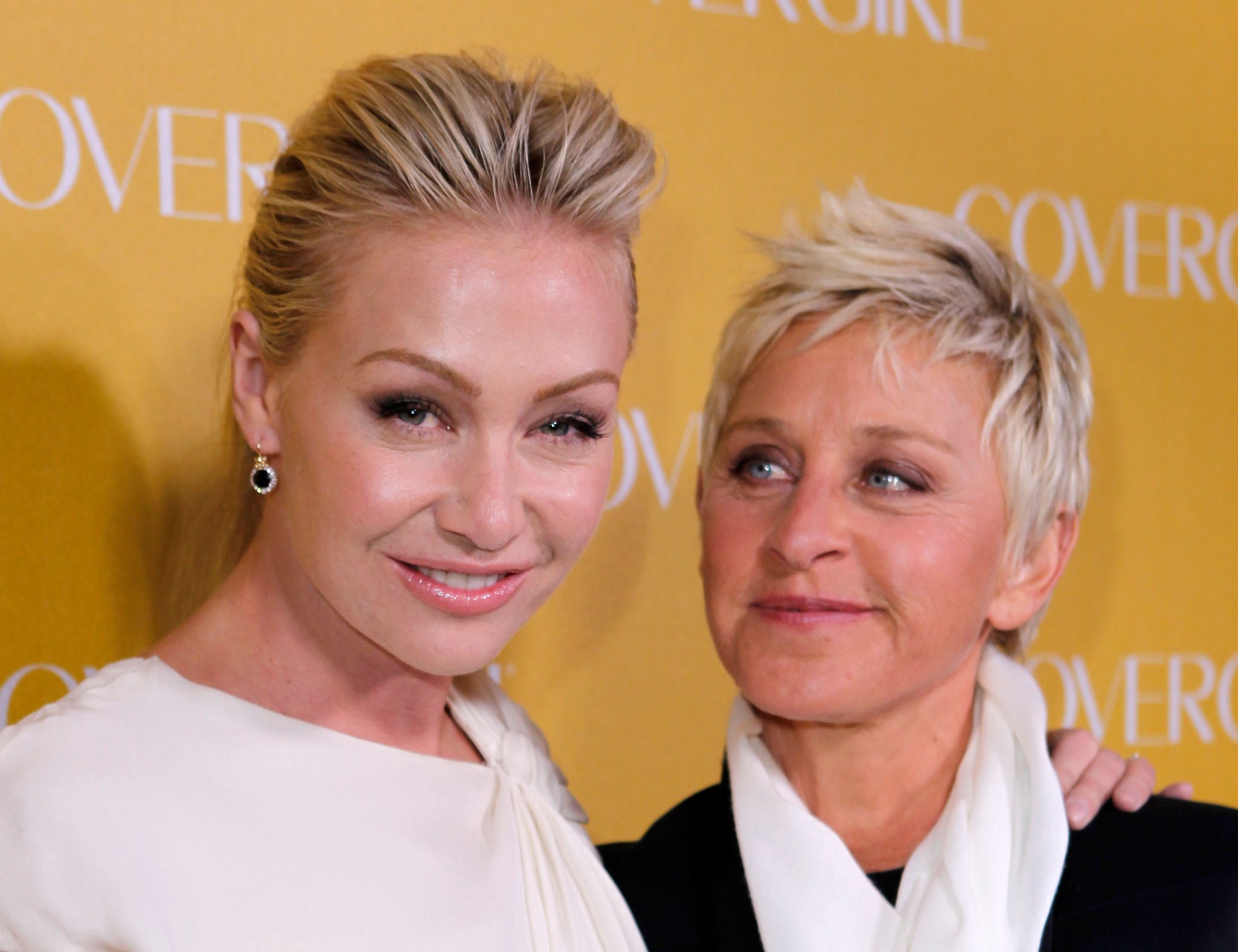 DeGeneres also says they strive to put their marriage first, despite their busy careers.

Our priorities are each other too. If we had kids, then I’m sure they would be, but we are. And that’s important.

I think the word ‘love’ is thrown around, like, ‘I love you’ is great to hear, but you want to feel it. You want to feel that you’re understood, and they know exactly who you are, and they know how to take care of you. That, to me, is family. I don’t think it has anything to do with blood relation. Family for everyone is different.”

So what’s the best part about being married? DeGeneres adds.

There’s no best part. It’s everything. I can’t imagine not being married. I have my best friend, the person I want to spend time with more than anybody else in the world.”

Congratulations to WNBA stars Brittney Griner and Glory Johnson who were married over the weekend at a resort in Phoenix.

Johnston, was quick to post a wedding photo on Instagram of her in a stunning strapless champagne wedding gown and Griner sported a tan suit and white tennis shoes.

Out Atlanta Dream player Angel McCoughtry and her partner Brande Elise shared a photo from the reception.

I’m soooo proud of this women right here. She’s one of the sweetest people I ever met. And she deserves nothing but the best in this world. Soooo glad she’s happy and found love 💕. Love u sis @brittneygriner #johnsongrinerwedding

❤️👰🏽🎉 wishing you both a beautiful life together on this perfect day. #loveislove #grinerjohnsonwedding #johnsongrinerwedding

The beautiful bride 👰🏽 @missvol25 I am over the moon for you mama. I wish you both happiness and endless love. 💋💋💋 #grinerjohnsonwedding #johnsongrinerwedding

The wedding comes just two weeks after the couple made headlines after an argument at their home in Goodyear, Ariz., led to a 911 call and arrests of both for assault and disorderly conduct.

On April 28, Griner accepted a plea deal to enter domestic violence counseling, after which the charges against her will be dismissed. Johnson enrolled in counseling voluntarily.

For most, a wedding day is among the happiest moments in a person’s life, a milestone to look back on for years to come, which makes it all the more strange that people are still denied the right just because they love someone of the same sex.

Same-sex marriage is currently legal in Canada, as well as 36 states in the U.S., Washington, D.C., and some 15 other countries around the world. But with the U.S. Supreme Court currently hearing arguments on the constitutionality of other states’ bans on the right, the spot certainly makes for a timely reminder of what’s at stake.

Nobody’s Memories is a new ad from FCB for LGBT advocacy group PFLAG Canada, which imagines the joys missed by couples unable to legally marry in years past.

This is our tribute to all those in the past who were never allowed to marry by law – and to everyone who is still denied the right today. Share your love stories, wedding photos and videos on Instagram and Twitter with #lovemadelegal and let’s make gay marriage legal everywhere.”

They’re seen walking down the church steps to applause, piling into the wedding car, sharing a bite of cake at the reception, and the myriad other little images and traditions associated with the big day.

It’s a simple, powerful illustration of why the right to same-sex matters in societies that purport to pride themselves on ideals like freedom, equality and the pursuit of happiness.

News stations have been going crazy reporting that WNBA stars and fiancees, Brittney Griner and Glory Johnson, were arrested for assault and disorderly conduct.

The Associated Press writes that Griner and Johnson were both arrested on Wednesday after a domestic violence situation at their house in Goodyear, 20 miles west of Phoenix.

Griner told police that she and Johnson had been arguing every day and got into each other’s faces Wednesday afternoon in the home they had bought two days earlier after Johnson said Griner “disrespected” her, according to a police report.

Johnson told police Griner had gotten too close, so she pushed her back to get some separation and began talking to her sister, Judy Johnson, when she was pushed in the back of the head by Griner. Glory Johnson turned around and the physical altercation began, with both fighting on the floor for 4 to 6 minutes. The entire episode lasted about 20 minutes, according to the report.

Griner had a laceration on her right wrist and a tooth mark on the middle finger of her right hand after it ended up in Johnson’s mouth, according to the police report.

Johnson, who plays for the Tulsa Shock, had a cut on her lip and Julio Trejo, a friend of Griner’s, had a cut on his neck after trying to break up the fight. All three declined medical attention.

Griner also said she broke a dog bowl after throwing it against a wall during the argument.

Griner told police the fight was caused be weeks of stress, including buying a house, planning a wedding and their relationship.

The pair announced their engagement late last summer and expected to get married next month.

Griner and Johnson were released from the 4th Avenue Jail in downtown Phoenix at 4 a.m. on Thursday.

The only statements that have been made at this time are from their team representatives. Phoenix Mercury Executive Vice President and General Manager Jim Pitman released this statement today:

The Mercury organization is aware of an alleged incident involving Brittney Griner. We are in the process of gathering additional information, and will have no further comment at this time.”

Glory plays for the Tulsa Shock, and the team’s president Steve Swetoha expressed a similar sentiment:

We are aware of the reports out of Phoenix regarding our player Glory Johnson. We are in the process of gathering information at this time. Of course our first concern is for Glory’s well-being and health. We are looking into the matter further and have no other comment to make at this time.”

Brittney and Glory became engaged last year and are set to marry next month. They recently appeared on an episode of Say Yes to the Dress Atlanta with Glory’s family helping her find her bridal gown.

This Friday, WNBA star Brittney Griner and her fiance Glory Johnson are featured on TLC’s Say Yes to the Dress: Atlanta.

Say Yes to the Dress is a TV Show takes place in one of the U.S.’s largest and busiest bridal salons in the southern – Bridals by Lori. Part bridal story, part fashion makeover and part family therapy session, each episode looks at the personalities and craftsmanship that come into play as the shop’s staff, headed by owner Lori Allen and fashion director Monte Durham.

After getting engaged last year, the WNBA power-couple is moving forward with their wedding plans, and that means choosing a dress. 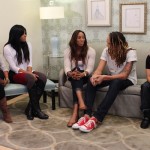 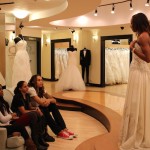 “Dressing Glory was not as I had envisioned. I expected this fabulous athlete who would not really want to look like a traditional bride. I’m thinking maybe a pants suit—boy, was I wrong. Ultimately Glory was very traditional and was only interested in pleasing Brittany—like most other brides. This is why I love bridal—it keeps you on your toes! In the end, Glory looked glorious (no pun intended).”

You can see Johnson and fiancé Brittney Griner as they try to find the perfect dress at 9 p.m. Friday on an episode of “Say Yes to the Dress: Atlanta” on the TLC Channel