So excited for this. Pink is set to release a new single later this month.

Just Like Fire will be her first single in three years.

It’s in aid of Disney’s upcoming sequel Alice Through the Looking Glass, and marks the first time that Pink has written an original song for a live-action feature film.

The track will out April 15, with a music video landing in early May.

Just Like Fire was co-written by Pink with producers Max Martin, Shellback and Oscar Holter specifically for the film.

It follows a cover version of ‘White Rabbit’ that Pink recorded for the movie’s marketing campaign.

Aside from a folk album released under the moniker You+Me in 2014, Pink’s last album was 2012’s The Truth About Love.

[tweet_dis]Haviland Stillwell has released her latest video for ‘Muse’ off of her album ‘Spark'[/tweet_dis]. The music video was directed by Elliot London and features Ashley Reed.

Stillwell is an out actress, singer, and producer, who feels living your truth in the open, with love and enthusiasm, is the way to true fulfillment.

“As an artist it’s important to be free and not to live in fear. I made a decision early on that I just had to be true to myself and be out. It just meant I’m not going to lie about this part of myself. I don’t want to be ashamed because it’s nothing to be ashamed of.

I’ve actually seen more of a positive benefit of being out than the other way around. We have the benefit now of so many people being out. It’s not like this weird subsection of society anymore. You turn on the TV and there’s Ellen (DeGeneres), there’s Neil Patrick Harris. We have to be role models, we all do. With social media now, you have to teach people by example.

Growing up in Georgia, she started her career debuting on Broadway in the original cast revival of ‘Fiddler on The Roof’, followed by Les Miserables. She relocated to Los Angeles in 2008, and has since been in films and television shows like Single Ladies, CSI:NY, and Eastwick.

Last month, Keyshia Cole made headlines when she released the song ‘She’, insinuating that she was singing about her lesbian lover just days after it was reported that she would soon be filing for divorce from her ex NBA player husband Daniel “Boobie” Gibson.

In her new video for the sensual track, the newly-single singer rolls around the bed in sexy lingerie in an attempt to seduce a “mysterious woman” who looks very familiar.

Regarding the song’s concept, Cole says it’s not about her playing for the other team.

“It’s about self love to me, and going through my divorce, you have to give yourself a little self love because you’re used to somebody being there every night and they’re not.”

‘She’ is the first single from Cole’s sixth studio album Point of No Return (release date TBA), and feature collaborations with R. Kelly, Juicy J, Future and Wale, to name a few.

“There’s definitely more sexy songs on this album than I’ve ever done. I’m excited to see what the people think about that, so we’ll see how receptive they are to the album. I think it’s a great album and I feel like it’s one of my best albums to date.”

On the very same day that Jessie J, Nicki Minaj and Ariana Grande released their musical menage-a-trois ‘Bang Bang’ – so did Macy Gray release her single of the same name. We love it!

Thankfully, the 2 songs have nothing in common and sound very different.

Yet Macy’s ‘Bang Bang’ leaves us with a sweet smile. The music video for ‘Bang Bang’ starts out innocent enough: drinking, dancing, and poker. Then things quickly escalate until two people are dead. Oops?

‘I wanted to create a record that reflects who I’ve become as a woman, mother and artist. This album is very personal to me. I want my fans to understand the place where I’m at in life and feel inspired by my music because it’s relatable.’

And before long she is flirting with and kissing another female partygoer.

“That was the director’s idea. But you know she’s fun, she’s a friend of mine. She’s a model, so I’d have kissed her either way, you know? Boy, girl — whatever!”

Macy has been an LGBT ally throughout her career and has played several gay venues and events.

“I just found that mostly in particular, gay audiences really know how to go a show. They really know how to party and you know, I don’t know if your sexual preference decides what kind of music you like, but I just know it’s always supercharged like when we just did a couple of Pridefests this last summer. So I’m excited about that, you know, and I think you know there’s this desire to party and hear great music and great art and that’s the gay and lesbian community, you know?”

What we have to always remember is Macy is a multi-award winning, multi-platinum selling singer, songwriter, actress and mother of three – who has been overturning fan expectation and industry formula since the beginning of her musical career in 2000. She has had a colourful career that includes multiple Grammy, Billboard, MTV and BRIT Awards, and record sales of over 25 million worldwide. Her style is now classic – transcends genres, from experimental soul and alternative rock, to retro-disco and hip-hop.

The new single has the same jazzy, sultry sound Macy is known for, complete with her signature raspy voice. And it is certainly nothing like the other ‘Bang Ban’.

Jenny Lewis’ new music video ‘Just One Of The Guys’ is fantastic. Starring Anne Hathaway, Kristen Stewart and Brie Larson in drag, the video is for Lewis’ first single off her first album in six years – ‘The Voyager’.

Stewart, Larson and Hathaway all play back up in the music video. The trio switch it up from all-white clad band, to becoming the titular dudes, all wearing tracksuits and fake moustaches. The song is about the expectations placed on women as they get older. 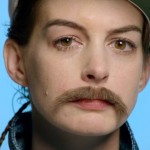 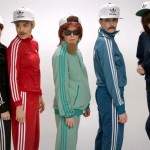 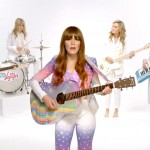 Lewis’ previous solo album, Acid Tongue may have been six years ago, but she’s been busy. In the interim, she created a collaborative I’m Having Fun Now under Jenny & Jonny, and she also did film work, scoring and writing songs for the indie flicks ‘Very Good Girls’ and ‘Song One’.

Last year Mary Lambert signed to Capitol Records and according to a press release sent to media this week she’ll be releasing her full-length debut album entitled ‘Heart On My Sleeve’ on October 14th.

But for those of you who can’t wait for her album, Lambert has released ‘Secrets’ on her VEVO page. That lyric video shows Mary at her bedroom opening her personal diary and revealing all of her ‘secrets’ to us.

The first single ‘Secrets’ was co-written by Mary Lambert, Eric Rosse and Benny Cassette, and MoZella.

“We wrote this song in one super fun night. Eric came up with this simple and quirky piano line. Benny put an awesome beat on top of it. MoZella and I were instantly inspired melodically, and started throwing around melody lines and lyrics. Most of the vocals you hear were tracked that night. We couldn’t stop laughing…”

“Secrets” is an upbeat pop song whose lyrics talk about self-empowerment and challenging beauty standards.

“It’s easy to paint a pretty picture and tell everyone to love themselves, but it’s way more complicated than that. There is so much shame and guilt in our society, and I think it has deprived a lot of people from living fully. We’re all facing battles. We’ve all had someone who has hurt us. So let’s talk about it.”

John Legend has premiered the music video for new single, You & I (Nobody In The World), that includes women of all kinds.

Directed by Mishka Kornai, the video celebrates all kinds of female beauty as it shows a number of different women studying themselves and their own insecurities. That means it has a lesbian couple, Tig Notaro and Laverne Cox among many other beautiful ladies of all ages, shapes, colours and identities.

A documentary called ‘When I Look In The Mirror’ has also been created, which explores the stories of the women in the clip further – with the hope that both pieces will help raise awareness and increase engagement in the #OperationGirl Charity Challenge.

“We live in a world where egregious injustices occur regularly against girls and women. We have a responsibility to take action and disrupt the conditions that allow for such tragedies to occur. Through #OperationGirl we hope to amplify the voices and impact of the many organisations doing great work on behalf of girls and women.”