The much-buzzed about Disobedience – which stunned the 2017 Toronto Film Festival with a six-minute sex scene between Rachel McAdams and Rachel Weisz – isn’t due out until April 27.

But today brings us the first look at the movie, courtesy of the debut trailer.

In the almost three-minute teaser, we get a snapshot of the orthodox Jewish lovers whose star-crossed romance is at the heart of the film. 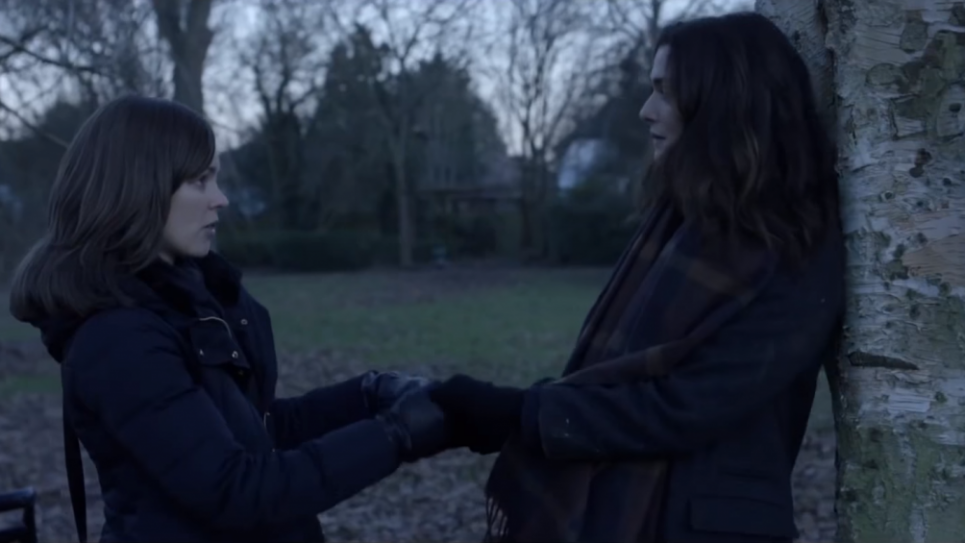 The movie, follows an Orthodox Jewish woman, Ronit (Rachel Weisz), as she returns to her family home in the wake of a weighty transgression and her rabbi father’s unexpected death, Disobedience seemingly charts a complex path through the dark side of religion-backed prejudice — specifically when it comes to queer romance.

As she grieves alongside her relatives (many of them wary of her unexpected return) Ronit forms an immediate attraction to Esti (Rachel McAdams), the wife of her cousin Dovid (Alessandro Nivola). The pair’s magnetic draw to each other evolves from lustful glances to many a passionate rendezvous, which causes a rift in Esti’s marriage. 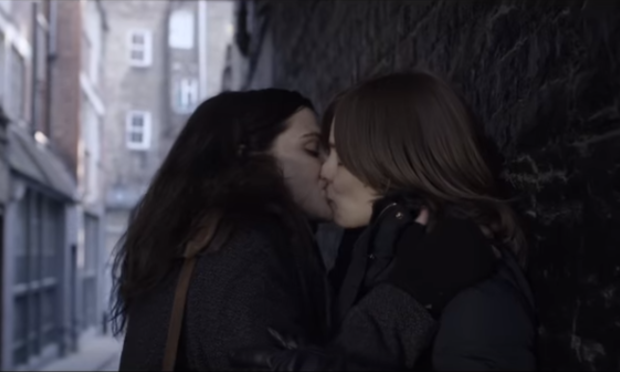 Lelio, whose transgender romance-thriller A Fantastic Woman is currently in the running for the best foreign language film Oscar, debuted Disobedience at the 2017 Toronto International Film Festival, where it earned glowing reviews from movie critics. The film is based on Naomi Alderman’s 2006 novel of the same name.

The film is based on the 2006 novel of the same name by Naomi Alderman.

The story follows a rabbi’s daughter (Weisz) who returns to her Orthodox Jewish community in Hendon, London following the death of her estranged father.

While there, she rekindles a romance with a former friend (McAdams), who just so happens to be married to her cousin. Alessandro Nivola also stars.

Given the involvement of McAdams and Weisz, Disobedience is bound to have a high profile release.

Disobedience currently does not have a U.S. distributor. The movie will world premiere in Toronto this September.

A hospital spokeswoman has confirmed that the teenage girl stabbed by an anti-gay extremist, Yishai Schlissel, in last week’s attack has died. 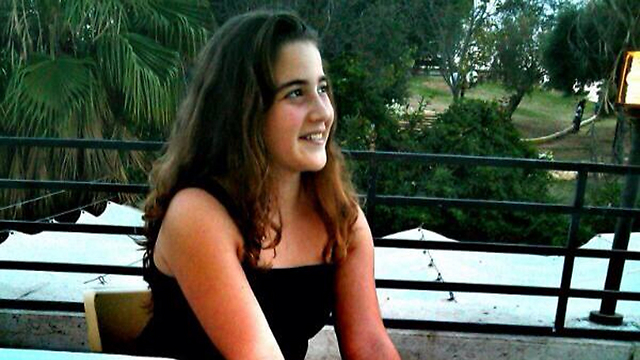 Shira Banki, 16, was one of six people stabbed Thursday during a Jerusalem’s Pride parade.

Banki died of her injuries Sunday at Hadar Elboim of Hadassah hospital. Her organs will be donated.

Benjamin Netanyahu, the prime minister of Israel, released a statement assuring Banki’s family that her killer would be brought to justice.

Shira was murdered because she bravely supported the principle that each one can live their life in honor and security. We will not allow this despicable killer to undermine the core values that Israeli society is based upon.

We contemptuously denounce his actions of hate and violence. We will do everything in our power to bring this killer to face justice.”

Schlissel was released three weeks ago after serving 10 years in prison for a previous attack at the same parade in 2005.

Upon being released, he had returned to his hometown, where he began distributing “hand-written pamphlets in which he called on ‘all Jews faithful to God’ to risk ‘beatings and imprisonment’ for the sake of preventing the parade.”

As an estimated 5,000 people gathered to mark the annual Pride celebration with a parade through the streets of Jerusalem, Schlissel approached marchers on Keren Hayesod Street and began screaming, then pulled a knife from his coat and began stabbing his victims. 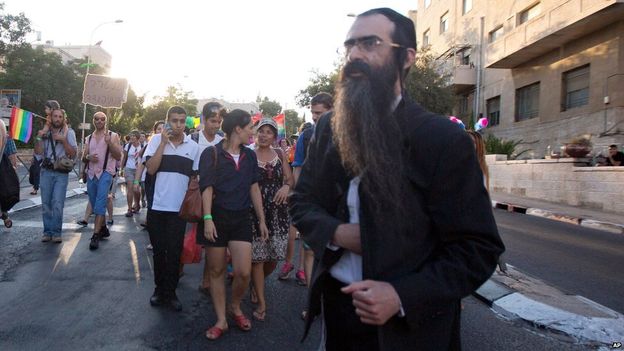 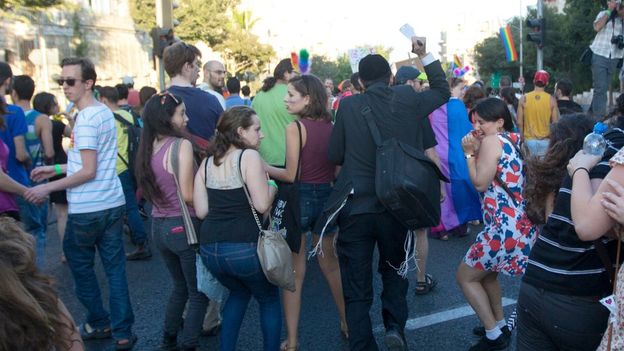 Haaretz notes that a police officer was able to tackle the suspect and arrest him. 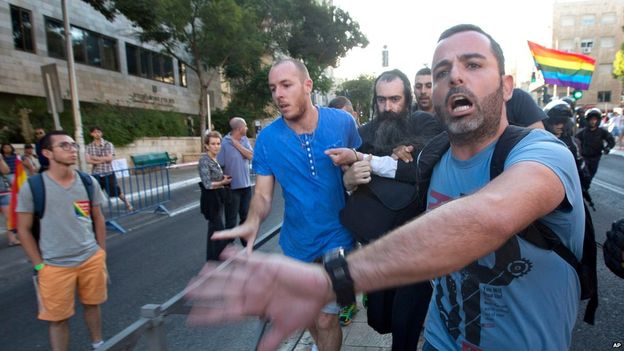 According to the newspaper Maariv, Schlissel wrote a letter ahead of the attack saying:

It is the obligation of every Jew to keep his soul from punishment and stop this giant desecration of God’s name next Thursday. Once again, the evildoers want to have a parade of sin and of all places, in Jerusalem — city of the king of kings blessed be he — in order to defile its holiness and desecrate its holy name on Thursday. They are always looking for ways to desecrate God’s name even more.”

In response to the stabbings, Israeli lawmaker Itzik Shmuli came out as gay in an op-ed published Friday in a Hebrew-language daily, Yedioth Ahronoth. 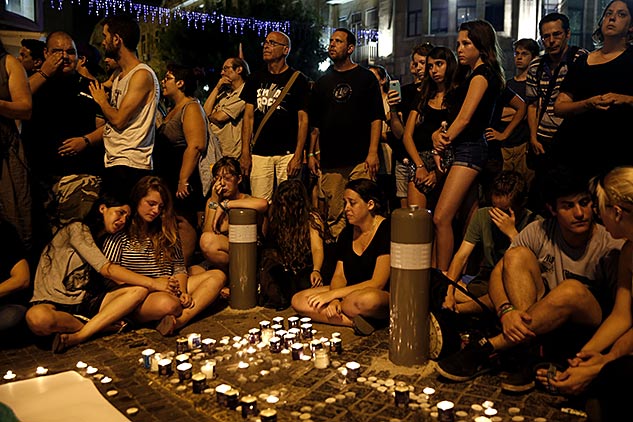 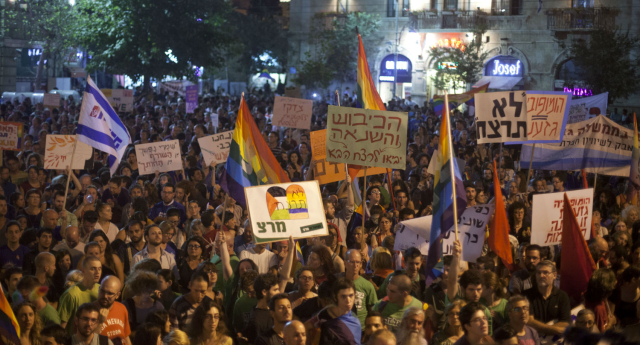 Under the slogan “Love Alway Wins” the rally is being held to promote tolerance and acceptance in the wake of the attack.

Leading ultra-orthodox leaders have since spoken out to condemn the attacks, with Israel’s Chief Rabbis David Lau and Yitzhak Yosef asking the Jewish people to stand together in “kindness and tolerance.”

The Torah of the Jewish people forbids all violence and [efforts to] injure any person, and especially someone who tries to kill another person.”

It’s unthinkable that a man can lift up his hand against another Jewish soul in the name of religion. I am praying from the bottom of my heart for the full recovery of those who were injured, and in the face of this type of hatred I call on the entire Jewish people to return to unity in kindness and tolerance.”

Police say an Orthodox Jew – who stabbed marchers at a Jerusalem gay pride parade 10 years ago – launched another knife attack at the same type of parade in the same city Thursday, stabbing and wounding six people who were on the streets for the event, police said.

Police arrested the attacker, Yishai Shlissel, at the scene of the brutle crime. However, report that of the six people stabbed Thursday, two were injured seriously.

Israeli police say Shlissel, an Orthodox Jew, was released from prison three weeks ago after serving a 10-year prison sentence for stabbing and wounding three marchers at a Jerusalem gay pride parade in 2005.

Prime Minister Benjamin Netanyahu said that the government would “pursue justice for those responsible” for the latest attack. The government fell short of calling it an act of terror, but Netanyahu did call it “a despicable hate crime.”

In the state of Israel, the freedom of choice of an individual is one of the most basic values. We must ensure that in Israel every man and woman lives confidently in any way they (choose).

This is how we operate and this is how we will continue to operate. I wish a speedy recovery to the injured.” 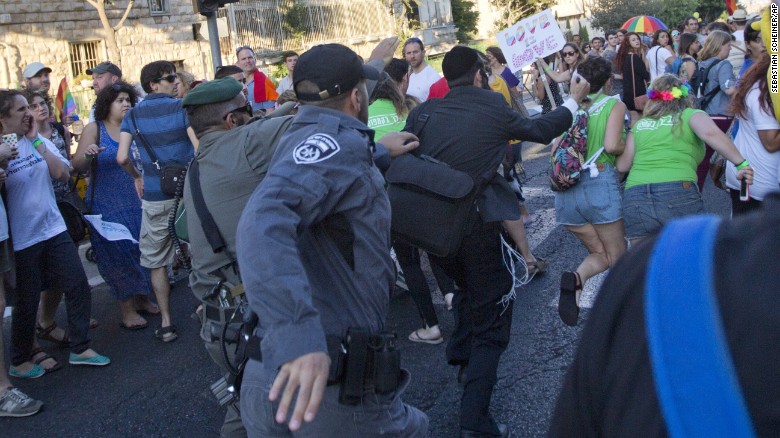 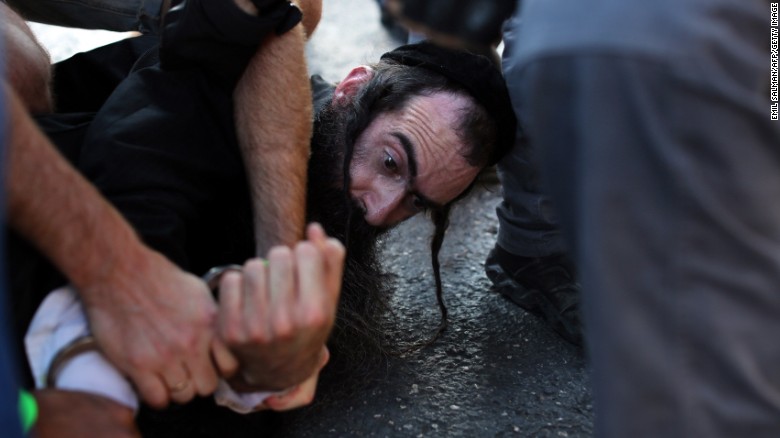 We came together today for a festive event, but the joy was shattered when a terrible hate crime occurred here in Jerusalem, the capital of Israel. People celebrating their freedom and expressing their identity were viciously stabbed. We must not be deluded; a lack of tolerance will lead us to disaster. We cannot allow such crimes, and we must condemn those who commit and support them.”

Israel has relatively liberal gay rights policies, despite the ultra-Orthodox community’s hostility towards homosexuals. The Jewish state repealed a ban on consensual same-sex sexual acts in 1988.