My Mama Wears Timbs is a short documentary about a pregnant masculine-of-center woman who reflects on her identity as she takes her first maternity photos.

Domo and Crissy – who rose to fame through their daily vlogging on YouTube – have hit back at haters who said “the wrong one” got pregnant.

The couple, who have over 1.4 million followers, are a expecting a child, but it would appear some people cannot handle the fact Domo is the one carrying the baby.

Why? Well she’s being called to “masculine” to carry a baby, unlike her feminine looking girlfriend.

Domo took to Instagram to debunk the comments, saying that she is a woman who has always wanted a child – and that her clothes do not dictate that fact.

Who cares if I like to wear snap backs and joggers? Who cares that I’m not the “normal” look of a pregnant woman. I am Domonic’s mom and I am proud!

There’s a lot of hate going around with me being a “pregnant stud” which is soooo funny to me. Like you people cry all day “don’t judge” or “I hate when people judge” but are the MAIN ONES.

Dom wrote that she was “blessed to be able to bring him into this world” and that she would teach him to stand up for himself.

“He will have the best life. So Domonic, mommy is sorry that you have to be born in a world full of hate, but just know that I will do my best to protect you. I love you Domonic Cristopher Wilson. You make me a better person.”

Domo said she was ‘blessed to bring him into this world’, and that she would teach him to be who he is and always stand up for himself.

So Domonic, mommy is sorry that you have to be born in a world full of hate. But just know that I will do my best to protect you.”

The couple are expecting the child, who they plan to call Domonic Christopher Wilson, on the 19th of March.

If you do a quick Google search of ‘maternity wear’, you’ll be greeted with a plethora of similar images. Almost all of the suggestions of clothes to fit a pregnant body will be some sort of dress, be it professional and sleek or maxi and ready for the summer. Many of the maternity clothes are also typically ‘feminine’ colours or have floral prints on them too. And while this may suit some, for many pregnant people, this is exclusionary.

This is an issue that very often leaves pregnant LGBTQ people in a dilemma. For example, pregnant trans men may struggle to find clothes that suit their bodies due to the fact that it’s uncommon that maternity lines will make clothes for pregnant men. Non-binary or genderqueer bodies also aren’t catered to and neither are lesbians who prefer more masculine clothes.

This is a problem that Butchbaby & Co. would like to solve, and later this year the company will release a line of “alternity wear for pregnant masculine, transgender, and queer individuals” that includes sweaters, jeans, hoodies and boxer briefs.

The company’s vision statement explains that:

The vision of Butchbaby & Co. is to create a world where pregnant individuals’ identities don’t have to change just because one’s body does. Alternity wear is the alternative to the hyperfeminine, heteronormative, eurocentric maternity wear that only exists today.”

What is also positive is that Butchbaby is part of a growing, inclusive trend. As profiled by ABC News, there are also companies like Bluestockings Boutique which offers a range of queer-owned and designer underwear brands and there is also the Los Angeles-based company Sharpe Suiting which makes bespoke suits without making assumptions about the wearer’s gender or identity.

We may still be a long way away from clothing retailers doing away with ‘male’ and ‘female’ sections in their stores, but hopefully this trend continues.

According to reports the US series – which was produced by Ellen DeGeneres and written by Liz Feldman– won’t be returning to screens after it was cancelled by producers NBC.

The comedy stared Elisha Cuthbert as a lesbian who who has made a deal with her best friend (Nick Zano) to have a baby together, and happens to get pregnant just as he meets and marries the love of his life (Kelly Brook).

The comedy is loosely based on the experience of its showrunner, and comedian Liz Feldman, and marks NBC’s latest attempt to put the spotlight on LGBT families.

Also read: Liz Feldman, Creator of ‘One Big Happy’  Was Told New NBC’s Lesbian Comedy Would “Never Make It on the Air”

Bosses announced they are dropping it after six episodes as it has struggled to find an audience. Not only that, but the sitcom was slammed by critics with The New York Times describing it as “an intelligence-insulting sitcom”.

The San Francisco Chronicle added: “There’s nothing funny about One Big Happy, the performances are wooden and irritating.

In a broadcast television season that has found success with diversity (ABC’s Fresh Off the Boat, Black-ish, Fox’s Empire), NBC brings another new family to our TV screens – One Big Happy.

The comedy stars Happy Endings’ Elisha Cuthbert as a lesbian who who has made a deal with her best friend (Nick Zano) to have a baby together, and happens to get pregnant just as he meets and marries the love of his life (Kelly Brook).

The comedy is loosely based on the experience of its showrunner, and comedian Liz Feldman, and marks NBC’s latest attempt to put the spotlight on LGBT families.

The idea of the show is based on my relationship with my best friend, a straight guy. We were two peas in a pod and had a plan to have a family together when he met the love of his life. What that did to me really surprised me; I was jealous and I felt really weird that I was jealous, and then I felt crazy about it. So I wrote a pilot about it. Sometimes I think the truth has a way of resonating more than any big agenda you could have.”

Speaking to The Hollywood Reporter, Feldman said that she went to multiple networks with the initial idea, but struggled to get the show created.

To be honest, it’s hard to get a show on the air. It takes some sort of miraculous chain of events. So, sure, I think adding the fact that there’s a potentially controversial character makes it more difficult, but that’s why I am so happy to be on NBC because they are willing to take this risk.

They have always been pretty supportive and groundbreaking in that way — from the moment I pitched them the show in the room they instantly wanted to do this. I pitched this to every major network and they were the only ones who wanted to do that. I heard things like, “This is a great idea”; “We would love to work with you in some capacity”; “This show will never make it on the air.”

Ellen Degeneres is the executive producer for the show, but her influence on Feldman runs deep.

As a writer and comedian, I can’t overstate Ellen’s influence on me. When she was authentic [and personally came out] it changed my life. It was just a silly little half-hour comedy show, but it changed my life and made me feel differently about myself. That is always something I carried with me, which I hope One Big Happy will be able to do for other people.”

Ellen DeGeneres has a new comedy coming to NBC called One Big Family. However, her role is not in front of the camera, but behind the scene where she is the executive producing.

The show stars Elisha Cuthbert as Lizzy, a lesbian who agrees to get pregnant and start a family with her straight male best friend Luke (Nick Zano), right before he falls in love with and marries a British girl named Prudence (Kelly Brook). 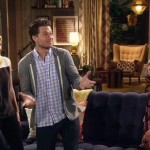 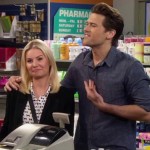 However despite featuring a lesbian, Ellen says the goal of the show was to make people laugh, not break new ground on TV with another lesbian show.

“It just happens to be a very funny show. It happens to have a lesbian character in it. It’s not like I formed a production company and said, ‘Bring me all your lesbian scripts.’ I’m not just going to be a lesbian machine that just turns out stuff.”

DeGeneres, who made TV history in 1997 when her character came out on the ABC comedy Ellen added:

“That’s all I wanted to do was put out really funny material [that’s] smart and thought-provoking. If this is thought-provoking and helps people open their minds a little bit and see a multiracial couple, to see a lesbian character and to see a guy who is her best friend that has a relationship, that’s a whole other story…

They’re just going to be people that you love and watch and don’t think twice about any of it being weird. It’s just friendship or family or whatever that is. I think friendship is obvious, but family is not so obvious. Family changes all the time.”