Selena Gomez has released the music video for her new track Bad Liar, which she had been teasing for a couple of days.

In the video, Gomez takes on four different roles: that of a young closeted schoolgirl in the ’70s, a guy who seems to be the school principal, the mother, and a cheerful blonde gym teacher.

Throughout the video, shy Gomez keeps looking over hopefully at gym teacher Gomez. She’s in love with her, but so is does principal Gomez.

By the end of the 3 minutes and 52 seconds video, she’s shown caressing a picture of gym teacher that she keeps hidden underneath her pillow.

The whole thing is super twisted but once fans get the message, it’s pretty incredible.

After executive producing 13 Reasons Why and now seeing this video, it seems like Selena is really pushing for her fans to have important conversations with their parents whether it be about their sexuality, about depression or really anything else that they might be scared to bring up.

Some of Hollywood’s biggest influencers have expressed their frustrations at the U.S. Senate rejection of the proposed measures gun proposals.

The appeal letter features on the cover of the latest issue of the magazine, released on Wednesday (22Jun16).

As leading artists and executives in the music industry, we are adding our voices to the chorus of Americans demanding change,”

The names of all 133 actors and music stars, and 57 executives, that are backing the campaign also feature on the front and back of the publication.

Music always has been celebrated communally, on dancefloors and at concert halls. But this life-affirming ritual, like so many other daily experiences – going to school or church or work – now is threatened, because of the gun violence in this country.

The one thing that connects the recent tragedies in Orlando is that it is far too easy for dangerous people to get their hands on guns.”

The tragedies referred to in Orlando, Florida, include the mass shooting at Pulse nightclub by gunman Omar Mateen and the assassination of singer Christina Grimmie by shooter Kevin Loibl at a fan meet and greet in the city.

The letter continues to list the ways that Congress should be doing more to prevent gun violence in America, such as “require a background check for every gun sale” and “make it illegal for suspected terrorists to legally buy guns”.

Selena Gomez is stepping into her power and taking control.

The 23-year-old singer has moved on from her split from Justin Bieber, and from the sound of it, she plans to remain happily single for a while as she focuses on herself and her career. 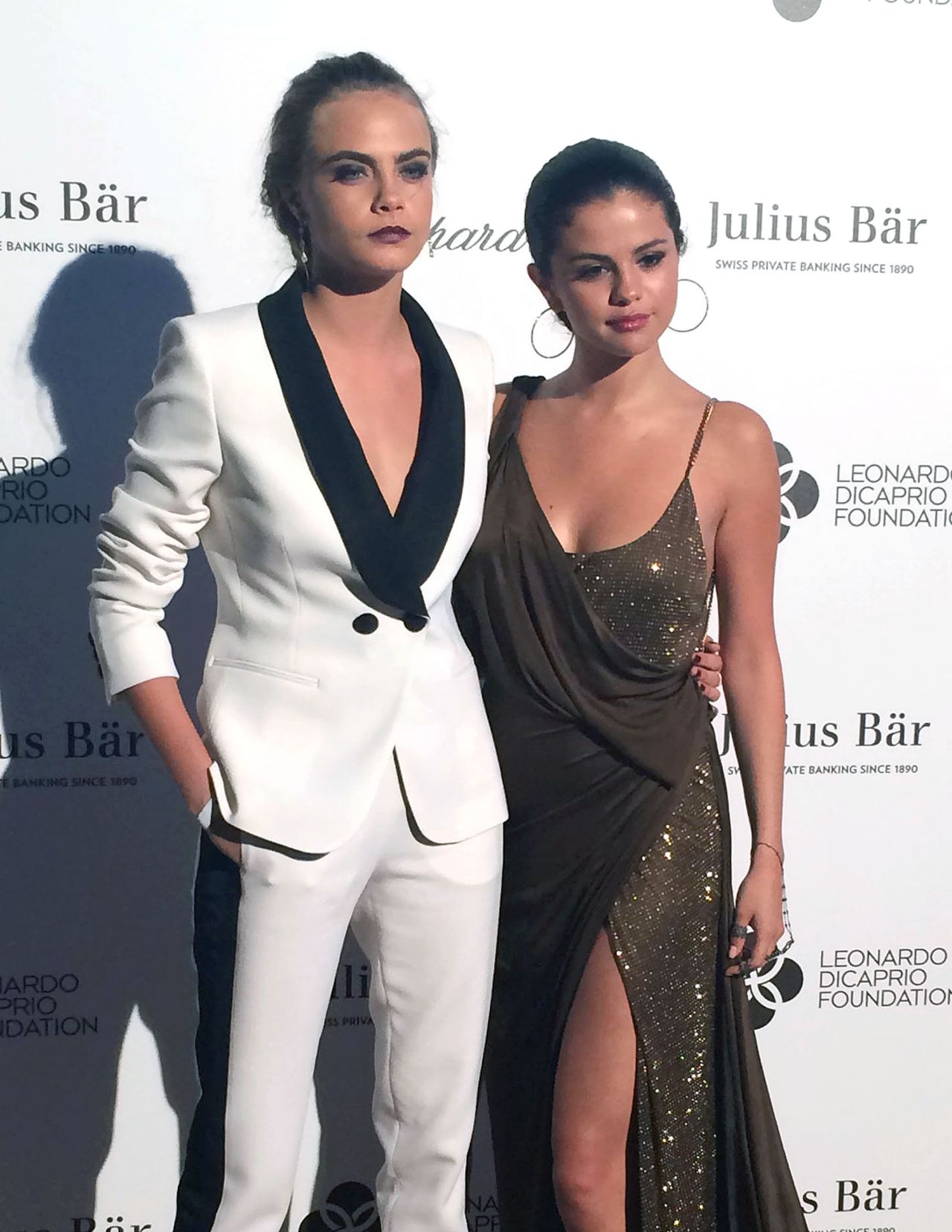 In a new interview, Gomez talks about gay fans and friends, including out model/actress Cara Delevingne. When asked how she felt about lesbian rumours that were sparked by her hanging out with Cara, she joked,

I’ve made it! … Honestly, I loved it. I didn’t mind it. Especially because they weren’t talking about other people in my life for once, which was wonderful. Honestly, though, she’s incredible and very open and she just makes me open. She’s so fun and she’s just extremely adventurous, and sometimes I just want that in my life, so I didn’t mind it. I loved it.” 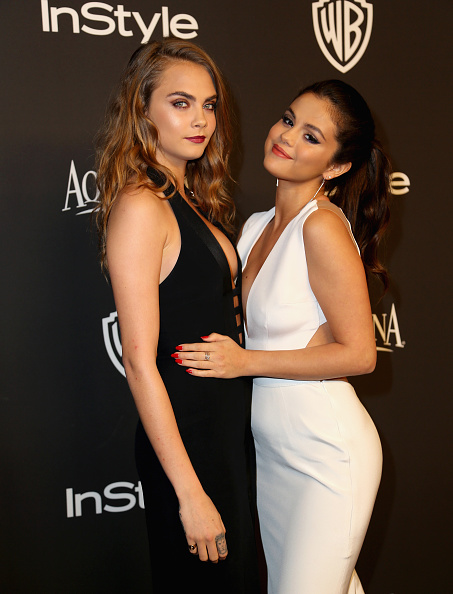 As to if she’s ever questioned her sexuality, Gomez said,

Oh, I think everybody does, no matter who they are. I do, yeah, of course. Absolutely. I think it’s healthy to gain a perspective on who you are deep down, question yourself and challenge yourself; it’s important to do that.”

Ellen Page and her lawyers found themselves in court this week, after police arrested a stranger crashing in her front yard. WTF?!

The guy had set up camp and made himself cosy with all the necessities – bedding, a cell phone, a laptop, iPod, a pot pipe, and for some reason, one PlayStation game controller (why just one… we have no idea).

Ms Page was unaware of her intruder, until he repeatedly knocked on her window and tried to bust in through her front door.

Ellen says the guy told police she’s a “nice” person who wouldn’t mind him squatting on her property – I think she did mind.

A restraining order was issued against the man for trespassing, with a judge ordering him to stay 100-yards away for Ellen and her pad.

Where’s the U-Haul at?

The saga continues with the is-she-isn’t-she Kristen Stewart. This week it has been all over the papers that Ms Stewart and her rumored BF/GF, Alicia Cargile, are taking the next big step in their relationship – they’re renting an U-Haul people!

“Kristen recently bought a huge loft in downtown LA and she asked Alicia to move in. It seemed pointless to live apart, since they were with each other every day.”

For months now, rumours have been flying that the two are in a lesbian relationship. But Ms Stewart has yet to confirm their romance or living arrangements, despite the continued media hounding.

Rosie O’Donnell recently announced that she was splitting from wife Michelle Rounds, and then went on to shock the nation by quitting her job on The View.

However, Rosie appears to be looking on the bright side of life. Speaking at a recent film festival in New York City, the 52-year-old comedienne joked that she now feels like a ‘lesbian cougar’ when meeting young pretty fans – Grrrrrrr!

Queen Latifah looked to be having a ball Rio de Janeiro with her girlfriend, Eboni Nichols, as the two enjoyed a romantic getaway in the South American.

The couple headed to the Paul Landowski, Christ the Redeemer, and lapped up the incredible sight alongside a host of equally impressed tourists.

Can we just say they make a great couple – we just love it when celebrities just acted normal.

Kristen Stewart is still driving the tabloids wild, not only is she the face of Wonderland, BUT she still insisting on travelling the world with make-up artist, and LESBIAN friend, Alicia Cargile. Are they, aren’t they… we’re not too sure, but they certainly have everyone’s attention.

Really – but they’re just BFFs. Well apparently Ellen’s coming out and Shailene’s fluidity in love means there is plenty of room too gossip.

According to certain sources, the pair are rumoured to be dating, having been spotted dining in West Hollywood. A dinner, which comes on the back of Shailene hinting at her possible bisexuality – telling The Hollywood Reporter:

“I fall in love with human beings based on who they are, not based on what they do or what sex they are.”

Personally I think everyone needs to calm down a little bit. Yes they would make a great lesbian power couple, but a dinner date with a lesbian doesn’t automatically make you gay.

On a slightly sadder note – rumours were buzzing that Angel Haze and her girlfriend Ireland Baldwin split. Noooooooo!

It was only 48 short hours ago, we were blissfully happy, listen to Haze’s brilliant new track, Candlxs, a love song she says she wrote for her girlfriend.

But then something terrible happened, with the rapper tweeting:

But like all lesbian relationship the heartache was short lived and today the couple are back in love again… phew.

And final we have Cara Delevingne. Oh Cara, Cara, Cara… how you make our office buzz. According to source, Ms Delevingne love affair with Selena Gomez is over… when did it even start?! Hmmm, I seem to remember this little rumour started circulating last year for some reason vaguely to do with Justin bieber, but this short-lived romance has now been dashed by Gomez moving onto DJ Beau Zedd. Shame.

Alas we cannot be too sad for Ms Delevingne, as she has quickly been embraced by two Hollywood tribes – the Willis (Bruce Willis and Demi Moore children).

…and by the Kardashian sisters. Hurrah – may the partying continue.