The Kubrick honour is presented to a “unique individual, upon whose work is stamped the indelible mark of authorship and commitment, and who has lifted the craft to new heights.”

Foster, a two-time Oscar Best Actress winner for Silence Of The Lambs and The Accused, directed this year’s Money Monster and earned the Golden Globes’ lifetime achievement award in 2013.

The latest honour comes the same year as the 40th anniversary of her breakout acting debut Taxi Driver.

It seems fitting that in this 40th Anniversary year of both Taxi Driver and Bugsy Malone, we are honoring Jodie’s remarkable trail-blazing career at the Britannia Awards. It takes a rare and special talent to launch an international career with two amazingly different performances, and Jodie’s choices as an actor and director have continued to earn a deserved reputation as one of the most versatile professionals of our time.”

Mohammed Dahbi has been ordered by NYC Commission on Human Rights to pay $14,000 (£10,676) to a lesbian couple who he banned from kissing in the back of his car.

A cabby who claimed he had a “no-kissing policy” in his yellow taxi was hit with was ordered to pay $7,000 each to Christina Spitzer and Kassie Thornton following the incident in October 2011. 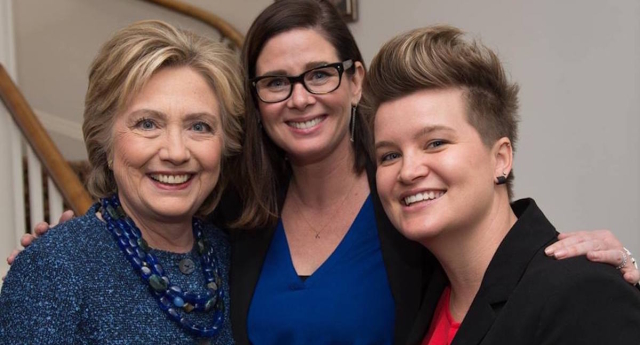 The couple claimed Dahbi had called them ‘c**ts, whores and bitches’ and that despite only giving each other a ‘peck’ in the back of the car, they were told to ‘keep that for the bedroom or get out of the cab’.

In his defence, Dahbi responded by claiming he had received verbal abuse during the incident and said the couple called him a ‘f**king Arab terrorist’ and a ‘radical Muslim asshole’.

The driver said the women were ‘all over’ each other, and were blocking his view through the car’s rear view mirror and were distracting him.

He admitted telling the couple to wait ’till you go home’ when he pulled over.

Spitzer claimed that when they took their luggage out of the car and said they would not pay for the fare, Dabhi called them ‘c**ts, whores, bitches’.

Based on emotional damages, the NYC Commission on Human Rights ordered Dabhi to pay the damages to the couple.

They said they based their ruling not on the fact that Dahbi pulled over, but because he told them to ‘stop that behaviour’.

That statement constitutes a ‘declaration…that the patronage of Complainants is ‘unwelcome, objectionable or not acceptable, desired or solicited.”

Dabhi was also ordered to work with the Community Relations Bureau at the Commission for 164 hours.

A New York taxi driver must pay a lesbian couple $10,000 for telling them to either stop smooching in the backseat of his cab or kiss their ride goodbye.

Yellow cab driver, Mohammed Dahbi, was accused of discriminating against couple – Christy Spitzer and Kassie Thornton – over their sexual orientation by ordering them to “keep that [behavior] for the bedroom or get out of the cab.” He also gave the passengers abuse, calling them “b—–s,” “c—s” and “whores” when they got out of the cab without paying.

Judge John Spooner, who oversaw Dahbi’s trial at the city’s Office of Administrative Trials and Hearings, also ordered him to attend anti-discrimination training and to pay a $5,000 civil penalty to the city.

The city’s Commission on Human Rights, which brought the complaint against Dahbi on behalf of Spitzer and Thornton, still must approve Spooner’s decision.

We felt that what happened to us was wrong and he needed to take responsibility for his actions.”

The incident occurred in 2011, after Spitzer and her dog climbed into Dahbi’s cab at Columbus Circle and drove south to pick up Thornton in Chelsea. When they arrived in Chelsea, Thornton, who had been traveling, put her luggage in the taxi’s trunk, and Dahbi began driving them to Thornton’s home in Sunset Park.

The women testified at the trial that, at West 15th Street in the Meatpacking District, the cabbie told them to stop kissing and “save that behaviour for the bedroom.”

Dahbi claimed during the hearing that he couldn’t keep his eyes on the road because Spitzer and Thornton were kissing “heavily” and “touching all over each other.” Dahbi told the judge that he found their behaviour “distracting” and feared it would make him have an accident.

Spitzer and Thornton both testified at the trial that they had just kissed each other with a “peck on the lips.”

Spitzer told DNAinfo that she was certain it was only a light smooch because she had just had massive dental work done.

After Dahbi gave his ultimatum, Thornton told him that he was discriminating against them because they were gay, according to the decision.

“Don’t make me out to be an a–hole,” Dahbi responded to her, the decision says.

Thornton told the judge that after that comment she didn’t feel comfortable, so she got out of the cab, grabbed her luggage and left. Spitzer followed shortly after with her dog, according to the decision.

When the women refused to pay him the fare to that point, he hurled expletives at them and sped away.

Dahbi, a married father of four who has been a taxi for the past 17 years, said at his trial that he was not discriminating against the women because they were gay.

He also told the judge that for the last few weeks he had been volunteering at a food pantry for a charity called Metropolitan Community Church, which serves many gay homeless individuals.

“Mr. Dahbi has a standard of decency that he asks all riders in his cab to follow,” Najmi said. “He has asked straight couples to stop engaging in similar behavior. It can be very distracting for a driver if people are getting hot and heavy in the taxi.”

However, the judge disagreed.

“The more likely reason for [Dahbi] stopping the taxicab and directing Ms. Spitzer and Ms. Thornton to stop kissing was, not that he objected to all kissing, but that he was uncomfortable with two women sharing a romantic kiss,” Spooner said his decision.

In Dhabi’s written response to the original complaint that the Human Rights Commission filed against him, he also claimed Spitzer and Thornton referred to him as a “f—— Arab terrorist” and a “radical Muslim a–hole.” However, during the trial, he did not make those accusations, according to the decision.

However, Dhabi charged at the trial that Thornton had a bias toward Muslims, citing two tweets from her Twitter account. In a Nov. 7, 2014, tweet, she wrote, “I found ISIS in Los Angeles on the corner of El Segundo … call DHS!,” and posted a photo of a street sign for “Isis Av.” In a January tweet, she also tweeted that she had seen the final episode of “Homeland” on her DVR.

Thornton, an actress, stated that she made the tweets at the suggestion of her agent to be funnier on social media.

Spitzer and Thornton, who are getting married in June, moved to Los Angeles about a year and a half ago. Despite being on the West Coast and the complaint taking four years to go to trial, they said they stuck with the case. They even flew into New York last month to attend the trial on March 13.

It’s a weight that we’ve carried the entire time. We know that people are discriminated against all the time. We just felt we had to let the driver understand that it’s wrong. So he could learn, and he doesn’t do it again.”

Najmi, Dhabi’s lawyer, said they plan to appeal the decision.