Its official, Orange is the New Black’s Lea DeLaria is off the market. The actress, singer and comedienne, made the announcement Friday on her Facebook, Twitter, and Instagram pages that she is marrying longtime girlfriend Chelsea Fairless.

The announcement was accompanied by an altered photo of DeLaria and Fairless standing beside Michael Jackson and Elizabeth Taylor (the original image was from Liza Minnelli and David Gest’s 2002 wedding).

“Despite their concerns about the patriarchal confines of marriage, actor / singer Lea DeLaria & editrix Chelsea Fairless of Brooklyn, New York are pleased to announce their engagement. No date has been set for the impending nuptials but it’s safe to say that it will be the event of the season, or, a total shit show.”

The actress also confirmed that Jesse Tyler Ferguson will be the best man, while Sandra Bernhard will officiate the wedding.

DeLaria, who now has had number stage and screen appearances, including her standout role of prison inmate Big Boo in the hit Netflix series, will also be honored in Chicago on Valentine’s Day with the Equality Illinois Freedom Award.

At this Sunday’s SAG Awards, the OITNB team took home the Outstanding Performance by an Ensemble in a Comedy Series, but what was so great about this award is the fact the team emphasize the importance of diversity on-screen.

DeLaria is a s diverse as they get on the hollywood scene, but that is why we love her. Especially the way she represents our community.

Always stunning in suit, with her beautiful girlfriend by her side, DeLaria does not shy her queerness from the camera.

She is open and frank about who she is, and projects this with such confidence that we can’t help but smile.

In a past interview with the UK paper the Independent, she said about her style

“There is a ceiling that allows you to be a certain kind of gay. I’m not a lapdog cut person and I won’t tow the party line. People don’t want you to rock the boat. Even the modern queer movement have a problem with that. When you look like me, you want to act in a certain way.

There are two types of lesbians or dykes – the type that go to the Emmys wearing a tuxedo but don’t wear the bow tie, and those that do – the unapologetically butch.”

“Being butch is still a dirty little secret, but it’s how some of us are. We can’t forget where we came from. We need to put a positive face on it and it all comes from this international homophobia, that are only certain things are good; that you can’t be that type of lesbian.

It’s important for me to communicate that there’s nothing bad about being gay.”

Television and movie stars walked the red carpet at Sunday night’s Screen Actors Guild Awards in LA, but like always it was the ladies of Litchfield who stole the show.

Season three of Netflix’s Orange Is the New Black will be with us this summer, and then there is the new addition of Ruby Rose set to cause the a stir, however to keeps us all going the cast and crew were out in force at the latest Award show.

It was a great night for Netflix, as it cemented itself as a major player, with OITNB picking up it first Screen Actors Guild prizes.

Uzo Aduba was named Outstanding Performance by a Female Actor in a Drama Series for her role as Suzanne, aka Crazy Eyes. The actress couldn’t hold back her tears in her acceptance speech, thanking her costars and those who have supported her. 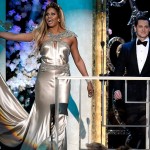 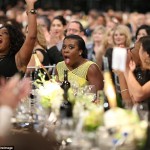 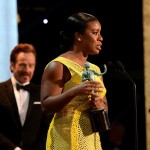 “Oh my God. I really, truly do not know what to say, I just wanna say thank you so much to the Screen Actors Guild for this incredible honor. I want to thank Jenji Kohan for writing a show like this and putting something like this on television, not just for myself but for our incredible team of actors to be seen in such a beautiful way.”

Uzo with winning, as Outstanding Performance by an Ensemble in a Comedy Series also went to the entire cast meaning everyone was a winner. 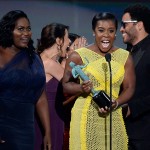 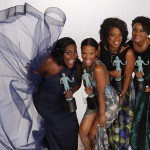 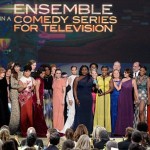 What is about gays on TV which can cause such a stir? Last week it was reported that 5 year old actress from ‘Good Luck Charlie’ received death threats after her Disney TV show featured lesbian moms. Seriously??!! ‘Mia, F**king Die in hell! Kill yourself, you deserve to die,’ stated one threat. Hate crime and death threats because we see lesbians on main stream TV. Seriously – get a grip.