Kasha Jacqueline Nabagesera, the founder and executive director of an LGBT rights charity Freedom & Roam Uganda, was announced the winner of an Right Livelihood Award for her “courage and persistence, despite violence and intimidation, in working for the right of LGBTI people to a life free from prejudice and persecution.” 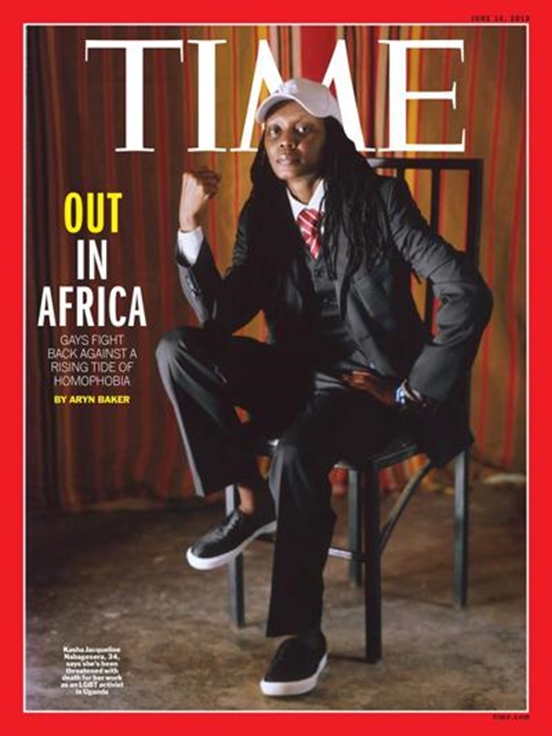 The international Right Livelihood Award is known as the Alternative Nobel Prize for honouring people who would not gain conventional recognition – honouring and supporting those offering practical and exemplary answers to the most urgent challenges facing us today.

Kasha has risked jail and violence to fight for LGBT rights for decades, in spite of the country’s anti-gay laws.

Both male and female homosexuality is punishable by up to 7 years’ imprisonment in Uganda under the country’s anti-sodomy laws.

Fighting for the rights of lesbian, gay, bisexual, transgender and intersex (LGBTI) people in Uganda, Kasha Jacqueline Nabagesera is one of the most courageous and outspoken human rights activists in Africa.

Operating within a hostile and repressive environment, Nabagesera has shed light on human rights violations, and has successfully used the judicial system to advance LGBTI rights.

She has overcome threats to campaign against repressive laws and uses a range of creative and innovative tools to continue breaking myths and stereotypes surrounding LGBTI people in Uganda and elsewhere.”

Nabagesera is one of the few activists in Uganda who has engaged in the judicial process to advance the rights of the LGBTI community.

When a Ugandan tabloid published the names and photos of (alleged) gay and lesbian people, she was one of three individuals who took the newspaper to court and won.

When in 2012 the Minister of Ethics shut down a workshop involving several LGBTI organisations claiming that such a gathering was illegal, Nabagesera was among those who sued the minister for violating their freedom of assembly.

These court actions are slowly helping to shift public opinion in Uganda towards the notion that LGBTI people have constitutionally guaranteed rights.”

Kasha Jacqueline Nabagesera, an out lesbian and co-founder / editor of Uganda’s first LGBT publication, Bombastic, is on the cover of Time Magazine‘s European edition.

She told Advocate Magazine she hopes the cover will not only bring awareness to the plight of LGBT Ugandans, but also help people around the world realise that LGBT people are their friends, neighbours, and family members.

It’s a great honour for me to be on the cover because it brings attention to the global LGBT struggle. Now many people will know about the struggles LGBT people go through in Africa and the world over. They will realize that the people they hate most are actually the people they love most when they get to read the article. They could be hating on their beloved family and friend without knowing they are LGBT.”

The move to feature what’s being celebrated as a monumental moment of visibility for Uganda’s harassed LGBT community.

More than ever, the world shouldn’t neglect the human rights of LGBT people, because we are here to stay — and part and parcel of the development of this world. All we need is respect, and protection from violence, and our basic inalienable human rights. Speaking out and bringing attention to the plight of LGBT people is life. I will not be silenced by anyone.”

Nabagesera became engaged in the very “controversial” issue of gay rights in Uganda when she was just 21, and has since played a leading role in the Ugandan LGBT rights movement. After being expelled from several schools, Kasha decided to study the law in Uganda.

Time magazine has history of featuring LGBT heros; here are some of the best covers

When a Ugandan court overturned the country’s Anti-Homosexuality Act this month, rights activists worldwide claimed a victory. But not gay Ugandans who fled persecution to live in a refugee camp in neighboring Kenya.

“The reaction shocked me. I went there. I thought it would be a celebration, but … nothing. They knew at an international level and at the diplomatic level, the decision is going to have impact, but at the local level, it won’t really. You can overrule the law, but you can’t overrule the mind.”

Of the 155,000 refugees at Kakuma camp, 35 are registered with the U.N. refugee agency as lesbian, gay, bisexual and transgender (LGBT) Ugandans who fled because of the country’s Anti-Homosexuality Act, which became law in February.

The now-overturned law called for life jail sentences for those convicted of gay sex and criminalized vague offenses like “attempted homosexuality” and “promoting homosexuality” in a country where being gay has long been illegal.

Since the law was first proposed in 2009, public opinion in Uganda has grown increasingly anti-gay, said Geoffrey Ogwaro, a coordinator for the Civil Society Coalition for Human Rights and Constitutional Law, which is based in Uganda’s capital, Kampala. Many gay Ugandans have lived in constant fear of arrest. Some were imprisoned. Landlords evicted tenants. One man tried to run over his gay son with a car, Ogwaro said.

Members of parliament have started petitions to resurrect the legislation, although President Yoweri Museveni is reported to have requested the parliamentarians to reconsider.

Three years ago, when a 26-year-old gay Ugandan man was caught with another man, his stepfather threatened to report him to authorities and he fled to Nairobi. “I thought, `No one loves you in your family,'” said the man, who insisted on anonymity because of fears for his safety.

With little money in his pocket, he could not afford to stay in the Kenyan capital. He registered with the U.N.’s refugee agency, and for three years he has waited in Kakuma camp for refugee status, which would make him eligible for resettlement in a new country.

The man does not want to stay in Kenya, where same-sex conduct is also illegal, and where a bill recently introduced in parliament proposes that foreign gays be stoned to death. He continued to face harassment in Kakuma but at least he got support from fellow gay Ugandans, he said.

“For the first time, I met these people who were just like me. You think to yourself, `OK, I’m not alone.’ At least I felt there was someone who understood me.”

But last month he left for Nairobi because he thought the camp had grown too hostile. A Ugandan refugee was hospitalized in June after another refugee hurled stones and slurs at him, said Anthony Oluoch, executive director of the Gay Kenya Trust.

Recognizing the risks for LGBT refugees, the U.N. refugee agency said it is prioritizing their cases for resettlement.

The 26-year-old gay Ugandan has been trying to find work, but few employers in Nairobi are willing to hire a refugee. Two of his seven roommates have turned to prostitution. The house keeps a special fund for bribing police officers if they are arrested, he said.

Kenyan police could legally send him back to Kakuma. Some police officers have even deported asylum seekers back to Uganda against their will, said Neela Ghoshal, an LGBT rights researcher for Human Rights Watch.

“There’s no place in Kenya where I really think they can live freely and safely. They’re basically set up for a lot of bad options in life.”