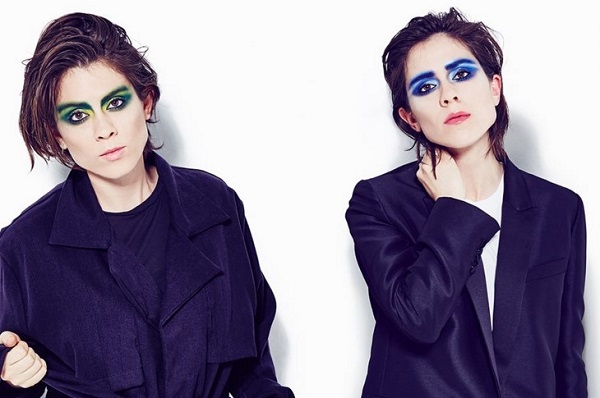 Tegan and Sara have released the video for ‘Faint Of Heart’, the fourth single taken from recent album ‘Love You To Death’.

The video stars LGBTQ youth in-character as musicians traditionally cherished as community icons: Elvis, Madonna, Prince, David Bowie, Grace Jones, and Tegan and Sara themselves. The real Tegan and Sara sit in the audience, cheering on the young performers.

According to Teen Vogue, where the video premiered, happened to be filmed the day after a gunman killed 49 people at a gay nightclub in Orlando, Florida. In that atmosphere, its creation felt particularly emotional.

There was something very personal about this tragedy and that was undoubtably on our minds as we arrived on set. I felt honored to be included… which sounds silly since it was a music video for our band.”

From the second we walked in, I felt incredibly emotional. The cast was so young, so excited, so talented, so friendly and so diverse. It was clear this video was going to be very special. I felt honored to be included… which sounds silly since it was a music video for our band. But from the second we arrived, my brain recognized the music video as something we were doing together with our community to present the bravery, the talent, the love, the art, and the connection we all have, rather than just a vehicle for our music — which was a relief. It might be hyperbolic to say this, but I think it altered how we looked at how we were going to proceed in our career. The video had meaning, and that felt very important in that moment of time.”

The video’s director Devon Kirkpatrick told Autostraddle, said he hoped to highlight the LGBTQ community with this video.

As a non-binary director myself, it’s important to me to be a part of creating opportunities that highlight the talents of the LGBT and specifically trans and GNC community. To cast trans and GNC young people as icons that helped to push the gender binary was especially gratifying. We cast two queer identified trans girls as Tegan and Sara themselves. It felt especially important to create a space that reflects inclusiveness.”