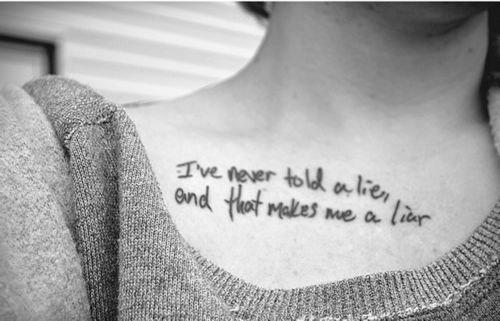 In this day and age, it’s common to meet someone who hasn’t been entirely truthful with you. That’s not necessarily to say that they can’t be trusted; sometimes it’s hard to share the intimate details of your life with someone you barely know.

However, over time, your partner should be able to be honest with you – and this isn’t always the case. Some women are practically incapable of telling the truth, and it will show up over time.

So, what are the signs that the woman you’re dating isn’t just a slight fibber, but truly a compulsive liar?

Sign #1: You have caught her in a number of lies.

Of course, just because you haven’t caught her doesn’t automatically mean she’s being entirely truthful, but it’s definitely easier to pick up on if you can catch her in the act of lying. If a great deal of her stories simply don’t add up… She may be a compulsive liar.

Often, when someone is a compulsive liar, they don’t even realize they’re doing it. They may honestly believe that everything that comes out of their mouth is the truth – even if you were there for the story they’re telling and you know it didn’t happen like they said it did.

Sign #3: She lies about things that don’t even make sense.

I once had an ex who worked as a veterinary technician. My roommates found themselves with a stray dog, and my ex offered to do a full check on the dog to try and find his previous owners.

After this “check”, she determined that this dog was micro-chipped and registered under the name Pumpkin (a name he refused to answer to), and the previous owners threatened to call the cops if they got another call about “that damn dog”.

After we had broken up, the roommates who owned the dog ended up taking him in to change his registered information, and they were quite embarrassed when they recounted the story, only to find out that there wasn’t even a micro-chip in place. This means that the rest of the story was also a lie.

Sign #4: She gets overly upset when confronted about her dishonesty.

This ties into sign #2; Since she believes her own stories, she will be incredibly hurt when you point out they’re not true. She may react as if you’re calling her stupid, or she may just be defensive over the fact that you can see through her facade.

When I had first started dating the woman mentioned above, I confided in her that I was constantly paranoid that I was being unintentionally untruthful.

I had simply meant that I was concerned that things I had taken to be facts were not actually factual at all – but she used this against me to mean that I, too, was a compulsive liar. (I might embellish a little bit sometimes, but that’s what writers do, right?)

Obviously, her distrust wasn’t an automatic indicator of her own dishonesty, but if someone has trouble believing anything you say, it might be because they are unaware of what counts as truth and what counts as a lie.

Sign #6: You can’t believe a single thing she says.

After awhile, your brain will start to pick up on all the cues of her dishonesty. Many people have a “tell”, after all, and after quite awhile of dating you will undoubtedly recognize these subtle hints, and apply them over everything she says. You might even start to not trust her for things you have no evidence over – which can lead to other problems in the relationship.

Sign #7: She won’t allow you to verify her stories.

If she insists that you believe everything she says without double-checking in any way, chances are, she’s being untruthful. An honest, trustworthy girlfriend shouldn’t have a problem with you checking into some of the incredible stories. I don’t mean to imply that you should sneak around to find these details, but you should be able to ask questions without being attacked.

Let’s assume that you’ve looked for these seven signs, and they’re all present – now what do you do? It can be incredibly difficult (or even impossible) to reason with someone who has no actual grip on reality, so you’re not likely to be able to convince her that her lying is detrimental to the relationship.

You instead need to evaluate whether you can live with this dishonesty. In a way, it can be a bit easier if you know it’s a problem – but that doesn’t mean that a long-lasting serious relationship is likely.

Compulsive, pathological lying can be considered a form of mental illness, and should be handled with care. Many compulsive liars are truly unaware of their condition, and treatment really isn’t possible unless they both comprehend the problem and are willing to change it.

It’s a deeply personal conscious decision to correct this behavior, and the problem may never be fully fixed. However, if you want to have a serious relationship with this woman, you will need to find a way to get her to admit the problem and work to correct it on her own.

She needs to understand that you care about her, despite her shortcomings in the honesty department. You must convince her to try to correct her lying. When a conscious awareness exists, she can begin to stop herself in the middle of a lie and correct it by saying “Wait, that’s not right.

What really happened was such-and-such.” It’s a long battle, and it may require professional therapy – but it has to be a choice she makes for herself. If she wants to keep you in her life, she needs to earn your trust slowly and over time.