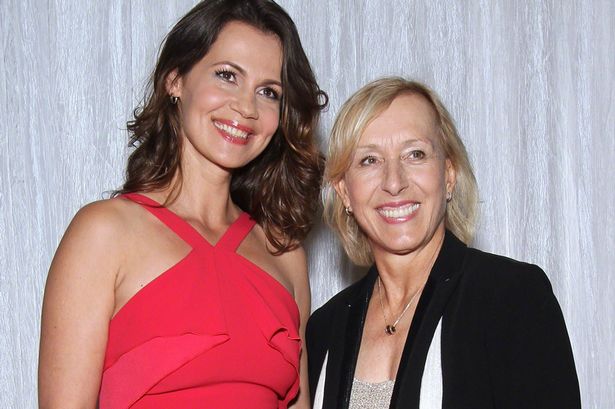 Tennis superstar Martina Navratilova recently wrote a piece for Sports Illustrated. In it she says the “watershed” moment for gay people in sport has been reached – and she’s hoping for an avalanche.

We’ve come a long way. In the 1980s I knew an NHL coach who was convinced there were no gay hockey players. Ever. Certainly not on his teams. Why? “This is a macho sport,” he said. Remember Reggie White? In the ’90s, the Packers star appeared in a newspaper advertising campaign to persuade gays and lesbians that they could “cease” their homosexuality. The NFL responded with … a lot of silence.

On her own coming out, she adds

When I came out, in 1981, I didn’t have much public support and I know I lost endorsements. But I never had to worry about losing my job. In tennis, there are no bosses, no general managers and no coaches who can keep players from competing. So I was safe in that regard. For team sports athletes, this is not the case.

A homophobic coach at any level — high school, college or pros — could keep a player from playing. Remember Rene Portland, the women’s basketball coach at Penn State? She proudly boasted she would not allow a lesbian on her team. In the past, that kind of homophobia would have had support from the front office. Why come out when — apart from dealing with all the other complications — it could kill your sports career!”

But the game is changing, more and more stars are choosing to come out, from rugby’s Gareth Thomas to football’s Casey Stoney, support from straight and gay allies is helping to pave the way for sporting to be more inclusive.

But the times changed. Boy, did they ever change.

Any revolution starts with a small step. As I see it, this one started with Vikings punter Chris Kluwe and his R-rated (but darn smart and funny) editorial on Deadspin last year. That was a catalyst because it then became clear: Straight players were standing in support of gays in general — and their gay teammates, whoever they might be.

Those gay athletes might have been deeply closeted, but there was unspoken acknowledgement: We know you exist. Kluwe wasn’t shunned or ridiculed for his stance. The tables turned. It was the homophobes who were left standing in the cold, scorned and criticized by fans and the media. How is that for a turnaround in, relatively speaking, a very short time?

She also highlights basketball star Jason Collins for his coming out and how he has paved the way for future generations in sport.

He is the proverbial game-changer. One of the last bastions of homophobia has been challenged. Collins’ action will save lives. This is no exaggeration: Fully one third of suicides among teenagers occur because of their sexuality.”

In 2013, the Brooklyn Nets player was the first active male athlete to come out. Since retiring, Collins has dedicated much of his time to campaigning on LGBT issues in sport.

Now that Collins has led this watershed moment, I think — and hope — there will be an avalanche. Come out, come out wherever and whoever you are. It is beautiful out here and I guarantee you this: You will never, ever want to go back. You will only wonder why it took so long.”