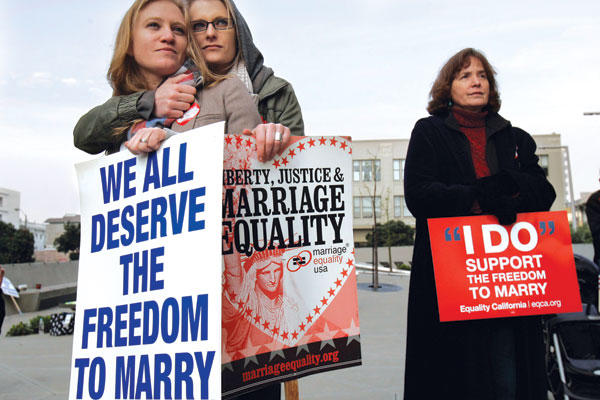 If homophobes win the fight in court, cities in Texas would be allowed to discriminate against same-sex couples.

Right now, cities may not deny married same-sex couples any of the spousal benefits provided to opposite-sex couples under US law.

But back in 2001 things were very different.

That year, Houston changed its city charter to freeze out city employees from sharing benefits with same-sex partners.

And in 2005, Texas changed its constitution to say only a man and a woman could marry each other. Officials were stopped from giving marriage benefits to any gay or lesbian couples across the state.

Then in 2013 the lesbian mayor of Houston, Annise Parker, overthrew those rules.

She directed city staff to grant legal status and spousal benefits to any same-sex couple who had married in a place where it was legal.

They argued her order to give rights to gay couples violated the Texas constitution.

And so they demanded a temporary and permanent injunction to stop city officials handing the benefits out.

The court did grant that injunction on a temporary basis.

The city appealed against this. And while all parties waited for a decision from the

Texas Court of Appeals in this case, events overtook them.

The Supreme Court of the United States made its decision that same-sex couples have the constitutional right to marry. By doing so, the SCOTUS justices made marriage legal in every state.

So the Texas Court of Appeals decided not to pursue the Houston legal debate as US law had now changed.

Yet the Texas Supreme Court’s inaction prompted outrage from state Republican officials and anti-gay activists, who urged the justices, who are elected, to take the case and allow Texas cities to discriminate against same-sex couples.

Last week, the court took the first step, caving to Republican demands and agreeing to hear the case in March—a worrying sign that the justices, fearful of a re-election fight, may soon yield to political pressure and roll back marriage equality in Texas.

It is now claimed ‘dozens of state elected officials, conservative activists and religious leaders’ have been lobbying the Texas Supreme Court justices, demanding a re-match.

They are asking the court to ‘defend religious liberty’ by taking away same-sex couples’ equality.

The protesters also want the court to challenge the SCOTUS striking down of Texas’ strict abortion restrictions.

If the homophobes win, experts warn this could be the first step to dismantling marriage equality around the US.

Alternatively, the Texas court may bow to the seniority of Supreme Court of the United States.

The case has also been criticized as wasting taxpayers’ money. One site supporting equality, Slate, said this should be a ‘painfully easy decision’.

But it’s clear there’s everything to play for.