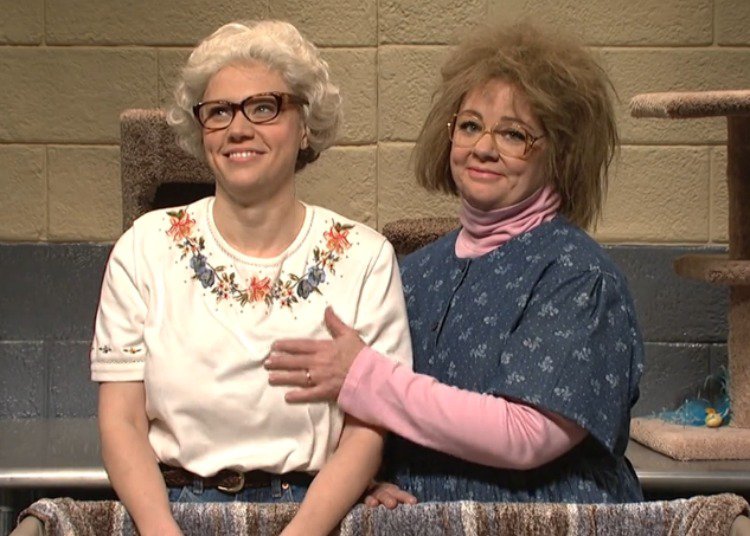 We already know that Kate McKinnon is the best thing to ever grace our gay TV screens. And we know that Kristen Stewart’s visit to SNL turned us 200% more gay. But there’s no such thing as too much lesbian humor.

So let’s back at some of SNL’s best (and queerest) sketches, shall we?

In this recurring sketch, McKinnon and a female guest host play two middle-aged women who work at a cat rescue shelter. The female guest host always has an unrequited crush on McKinnon, which leads to lines like:

McKinnon: “That is my nipple and I think you know that.”
Wiig: “I think I know you like it.”

and:
McKinnon: “Keep it in your jorts.”

“This cat is a gift from God. At least that’s what he told the members of his cult.”

The bad: They will put cats in your car when you’re not looking.

Wow, has it already been nine years since Ellen Page came out as gay on SNL?

AKA, wow, has it already been nine years since we fell in love with Ellen Page?

In this sketch, she plays a young woman who has found herself (and a lot of lady lovin’) at a Melissa Etheridge concert.

At one point, Page splits her legs into a deep V and moans, “Why does everything have to have a label? Why can’t I just hug a woman with my legs in friendship?”

The good: Lots and lots of…friendship.

The bad: Andy Samberg and Ellen Page should switch haircuts.

In this homophobic, fatphobic world, who is humanity’s last hope? Les Dykawitz and Chubbina Fatzarelli, AKA the crime-fighting duo Dyke and Fats.

The good: This duo can save me anytime.

The bad: Is the world ready for a savior who’s not a straight white man?

When gay men have fun, they dance, strip, have crazy sex, start drama and wear a lot of glitter.

When lesbians have fun…they don’t. They do puzzles and have tearful arguments.

The bad: What on earth are water socks?

This is one of the only post-2012 lesbian sketches on SNL McKinnon hasn’t appeared on – and yet it’s the most gay.

A cheery housewife (Vanessa Bayer) is perfectly happy making pizza rolls for her “hungry guys” – until Kristen Stewart shows up in a leather jacket, and they start having sex on the counter. While speaking French.

The bad: The camera cuts away before we see them reenact Blue is the Warmest Color.