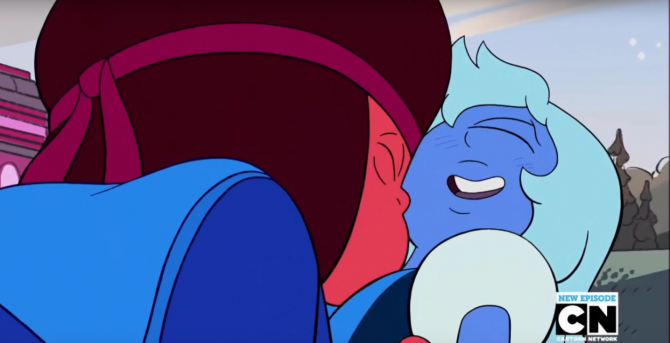 If you could sum up Steven Universe in one line, it would be this:

The show is a virtual safe space where gems fall in love, watermelons rule their own island, and Nicki Minaj voices a badass character.

It follows the adventures of Steven, a young boy with supernatural abilities, and the Crystal Gems, female aliens whose lives depends on their gemstones. The current Crystal Gems are Garnet, Amethyst, Pearl, and Peridot.

Steven Universe fights racism; many characters are of color, and their differences are celebrated without being centralized. It fights misogyny; strong female characters abound. It fights xenophobia; one character admits she doesn’t have a license because she’s technically an illegal immigrant. And it fights classism; the main character’s father lives in a van and finds no value in money

Let’s look at some of the top queer (and genderqueer) moments.

7. Desperate to impress Amethyst, Peridot saves her life – and winds up on top of her. Then she gives her a gift.

5. Steven rocks this aquamarine dress and pageant makeup. And never once does he bring up fragile masculinity.

4. Jasper returns from the bottom of the ocean to beg for Lapis to come back to her, but Lapis recognizes that Jasper was toxic, and ends the abusive relationship.

3. Ruby and Sapphire have been together for more than 3,000 years. And they still can’t stop flirting. This is the ultimate lesbian love.

2. Pearl falls in love with a woman who looks like Steven’s mother, Rose, whom Pearl was also in love with for thousands of years. She does have a type.

What are your favorite queer Steven Universe moments?