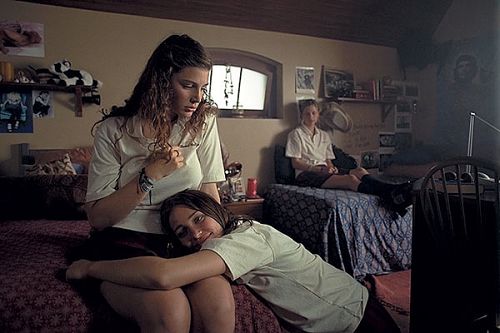 I have a confession to make: I am a sucker for emotional cinema. No matter how heartless I try to pretend I am, the sappy movies make me tear up every time. (I have an aunt who calls this phenomenon “TV eyes” – it helps us keep our hard exterior appearance.)

If you love the movies that bring you to tears, or you consider yourself an emotional stronghold and want to prove it, we’ve found the 7 saddest lesbian movies out there – how many have you seen, and how many actually brought you to tears?

(In order of release – not necessarily indicative of cry-worthy-ness.)

I’m not sure if this movie exactly counts as a lesbian film, since it centers around a rumor about sexuality, rather than actual sexuality. But, since this movie came out in the early ‘60s and features such huge icons as Audrey Hepburn and Shirley Maclane… We’ll forgive that.

This story centers around a headmistress and a teacher at a boarding school. Everything is all hunky dory for the two BFF’s (actual gal pals, not like the “gal pals” we hear about these days)… Until a student starts spreading rumors about the two women being romantically involved, and students start withdrawing from the school. Yikes!

Mostly, this movie is sad because back in the ‘60s, this was as close as they had to a real lesbian movie. I’m so glad Hollywood has picked up the slack lately, but this movie is pretty much a downer anyway.

For all you Angelina Jolie fans out there, this is the one movie where we got to see her as a sexy, emotional creature… Oh wait, that’s true of a lot of her movies. Still, Gia represented an important (and mostly true!) story of the supermodel, Gia Carangi, as she struggled with her career, her mental health, and her own sexuality. Oh, and not to give anything away if you haven’t seen it yet, but she also has AIDS.

Of course, there is the appeal of seeing Angelina Jolie topless, which is one of the big draws of many Angelina Jolie movies in the first place. But once you add in the powerful message behind it and the fact that this is actually based on a true story, it gets heart-wrenching and super painful.

If you start the movie when she’s topless, and then stop it before she gets onto the plane, this movie isn’t so sad – but if you’re into the whole picture, this movie will undoubtedly wreak havoc on your soul.

Okay, if we didn’t have Boys Don’t Cry on our list, I would be seriously upset at myself. Truly, this is one of those movies that most people will either love or hate – and most of us love it. Hilary Swank plays a transman in the midst of homophobia, transphobia, and general ignorance in Nebraska. Did I mention this one’s based on a true story, too?

The scenes in this movie are created specifically to rip your heart into a million shreds, halfway patch these shreds back together, and then rip them to pieces all over again. Seriously – it’s that good. If you haven’t seen it, I don’t want to spoil it, but it’s going to make you cry – guaranteed.

Let me start by saying that I absolutely adore Piper Perabo, and I probably always will. Now that we’ve gotten that out of the way… Technically, the characters in this movie don’t identify as lesbians – but as two young women who are just madly in love with each other. I think it’s beautiful that they don’t have to put a label on it.

That being said, this movie is pretty sad. Partially because the potential of the cast wasn’t fully realized, and partially because someone dies. (Not going to say who, but… You know… Any time you have lesbian romance in a movie and someone dies, it sucks pretty hard.)

I have a soft spot for anything one of my celebrity crushes is in, so I’m tempted to ignore the critic reviews that say this movie was total garbage. All in all, it tells a tale that many of us have been a part of us at one point or another, and the relatability is enough to break your heart, right? Take a look and form your own opinion about this one.

Another TV movie to hit our list – which is still a rarity for the queer community. The Laramie Project isn’t about lesbians, specifically, but it does touch on the murder of Matthew Sheperd – a huge event for the gay community as a whole. With a cast that includes “celebs I wish were my BFFs” such as Christina Ricci and Clea Duvall, this movie promises a stellar performance – and delivers.

Of course, a movie that surrounds the killing of one of the pioneers of LGBT+ visibility, no matter which of our fallen heroes it is, is going to be sad. The Laramie Project is no exception. In addition to the death of Matthew Sheperd, this movie also features survival, against the odds, and the paths we follow to grow as humans.

(Oh, and as a bonus, they also perform a version of “Angels in America”… How meta!)

Okay, so this one isn’t exactly a movie, but a TV mini-series. Still, this offers an inner look to the AIDS epidemic in the 1980s as it pertains to characters who you’re probably going to love right off the bat just because of the actors who play them. (I’m talking Meryl Streep, Al Pacino, and Mary Louise Parker here.) There are also plenty of intersecting sections of the “at-risk community” shown here, and it will rip your heart out – just like any other movie, TV show, or other type of content that deals with the AIDS crisis.

I have yet to watch this one myself, but after looking into it, I’ll definitely have to add it to my own list.

Okay, here’s another mostly-true story that happens to be one of my favorites. Monster tells the tale of Aileen Wuornos (Charlize Theron in a hardly-recognizable get-up) and her girlfriend, Selby (Christina Ricci) through their unconventional and highly criminal relationship.

The scary thing about this movie is that it really was a true story – one that’s been referenced in over two dozen different movies and TV shows – oh, and Charlize Theron won an Oscar for this movie. It’s not too often that Oscars are won by true crime stories, but this movie shows power.

The real Aileen Wuornos was America’s first female serial killer – something that’s not exactly a source of pride for most of us, but personally, it helped me be thankful that I’ve never gone down that path – although parts of it were quite relatable to me. If you haven’t seen it yet, what are you waiting for? This movie is a true classic.